Falcon Flames—the title identifies the many couples who met while attending BGSU, or married someone who also received their degree from the University. As of Jan. 2015, more than 12,000 couples throughout the world are Falcon Flames. Whether they met in class, in a student organization, or during pizza night in the residence halls, every couple has their own story.

One couple’s story has another BGSU connection as they were the University’s beloved mascots, Freddie and Frieda. Alex ’06 and Kristen ’07 Wright are two out of only three Falcon mascot marriages. Alex was Freddie his senior year after completing a term as student body president the previous year. When asked what prompted him to become the mascot, he said, “My earliest memories and pictures of Bowling Green are with ‘the birds’. It looked like fun, a different way to give back, and a way to spread my childhood Falcon spirit to my fellow students.” 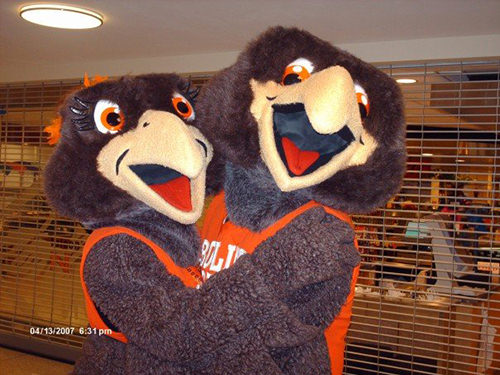 Kristen '07 and Alex '06 Wright as Frieda and Freddie in 2007Kristen was Frieda her senior year as well, while also serving as student body vice-president. The couple first met in McDonald Hall with casual greetings in the hallways, and was officially introduced on Dec. 7, 2005. They began dating soon after and had their first date at TGI Friday’s after the movie Alex selected was sold out. “I didn’t make a great first impression with that,” he joked. However, the night went well and they continued to spend time together at sporting events and student organizations. They got engaged after graduating.

Alex is the son of Tracey ’77 and Van ‘77 Wright, who is well-known on campus for his orange shoes and spirit wear and in his official capacity as assistant vice president of enrollment management. Alex’s brother Cameron Wright ’03 and sister-in-law Jessica Wright ’03 add one more couple to the family of Falcon Flames.

Alex and Kristen have been greatly shaped by their family’s school spirit, as well as the town and people of Bowling Green. “BGSU is part of a small town. People go out of their way to make your experience a successful one. People will help you, even unprompted, but at the same time challenge you. Part of college is growing up, and Bowling Green allows you to do that in a place that is supportive but also holds you accountable,” said Alex.

The couple learned about giving back and continuing a tradition while they were still undergraduates and has embodied those lessons as adults. You can find the Falcon couple back on campus for hockey games and Homecoming – easily spotted by their spirited license plates “FRDE 06” and “FRDA 07.”

There are quite a few notable Bowling Green alumni who are Falcon Flames. Bob ’55, ’06 (Hon.) and Ellen ’54 ’06 (Hon.) Thompson have been an integral part advancing BGSU and its campus with their generous contributions and unwavering support of the University. When Bob was asked his most memorable moment at BGSU, his response was “meeting Ellen”.

Bowling Green State University has also been on the receiving end of incredible kindness from Shantanu Narayen ’86, ’11 (Hon.), CEO of Adobe, and his wife, Dr. Reni Narayen ’86.

Paul ’75 and Margo ’74 Hooker funded a new Alumni Laureate Scholarship to create a way to make a student’s dream a reality.

Mark ‘47 and Mickey ‘47 Welker, Falcon Flames that hold the title of being married the longest, began their engagement when Mark proposed to his wife with the option of a ring or a new washing machine. Mrs. Welker chose the washing machine, getting the ring later on in their marriage.

No matter how they met or how they give back, each couple has a special place in BGSU’s heart and history. Happy Valentine’s Day to all of the Falcon Flames.