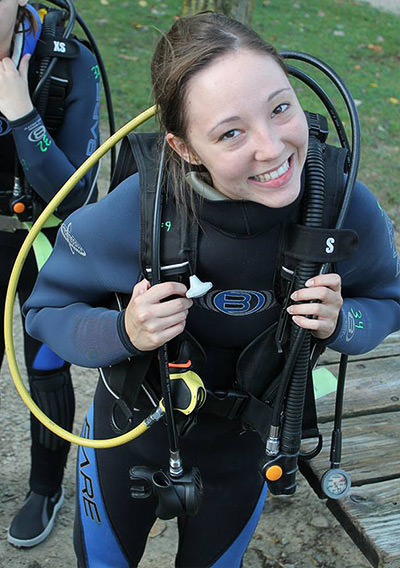 Little 11-year-old Brittany Novick sat in front of her television screen in 2003 to watch a National Geographic special exploring oceans. In that same week, she sat in front of a bigger screen to see the newly released film “Finding Nemo.” That week, at just 11 years old, Novick realized exactly what career she wanted to dive into.

Now, at 21, Novick has just graduated from Bowling Green State University with a bachelor’s degree in biology with a concentration in marine and aquatic biology. And her next move: head to San Diego, Calif., to intern with the Naval Marine Mammal Program.

BGSU’s Marine Program, celebrating its 50th anniversary this year, is one of the only marine programs throughout the state of Ohio, which Novick learned in the seventh grade. She immediately knew BGSU was the school for her.

She first attended Lorain County Community College for two years after high school but made sure all her classes would transfer smoothly to BGSU during that time.

Novick chose to go to a community college for economic reasons.

“I was able to save a ton of money and will actually be graduating debt free!” Novick said.

She came to BGSU in fall 2012 and immediately took part in multiple extracurricular activities.

“With all that she has accomplished, it’s hard to believe that Brittany has been at BGSU for less than two years,” said Dr. Michael McKay, director of the Marine Program.

Novick was the Vats Coordinator for the BGSU Marine Lab, producer and host of “Wild Adventures” with BG on TV, a member of the Marine Biology Association, a member of the University Dance Alliance and an intern at the Toledo Zoo. She also worked in the Laboratory for Sensory Ecology doing research on crayfish behavior under Dr. Paul Moore.

“BGSU has also opened many doors for learning and career opportunities, partially through the countless amount of marine biology alumni we have all over the country”This list does not include the Falcon Marching Band, Habitat for Humanity and the Honors Student Association, all activities she had to sacrifice because of her already busy schedule.

“BGSU has also opened many doors for learning and career opportunities, partially through the countless amount of marine biology alumni we have all over the country,” Novick said.

Connections also landed her the internship with the U.S. Navy. Novick learned of the Naval Marine Mammal Program from a friend of hers who is in the Navy. And Novick knew this was the perfect way to combine her two goals of joining the military and do something she loves. The intensive application process included five recommendation letters, countless paperwork and a phone interview.

“Within in two weeks, I had received the best phone call of my life,” Novick said.

During the “Animal Care and Training Internship,” Novick and a team of 19 other interns will support the Navy Marine Mammal Program staff while working with dolphins and sea lions. She will also participate in other marine mammal research projects while interning.

Though a bit nervous about moving across the country, Novick said she is ultimately excited.

“The best way to learn is through adventure, and I absolutely cannot wait,” she said.

Novick plans to take advantage of her stay in San Diego, including possibly exploring the idea of graduate school at the University of California – San Diego or different job opportunities.

“I am a little frightened to be thrown out into the real world, but at the same time, BGSU has given me the confidence to know that I can find something I want to do, no matter how crazy or big it may be, and with hard work, get there in no time at all,” she said.