Bill Auld is the guy who makes things ‘fly’

“The next time you go to a concert, look up,” said BGSU alumnus Bill Auld. The several tons of scenery and rigging you see has all been carefully planned and executed to seamlessly maintain the magic of theater.

Auld has the unusual job of calculating how to make people and all types of things “fly” on stages ranging from small churches to theaters to large arenas. He is one of only a few hundred people in the world who work professionally at this.

About 40 percent of flying is angels and Jesus, in regional churches,” Auld said. “Another 40 percent is in productions of ‘Peter Pan,’ ‘The Wizard of Oz,’ in Disney’s ‘Beauty and the Beast’ and ‘Willie Wonka and the Chocolate Factory.’ A small percentage is on Broadway and in rock and roll shows and circuses like Cirque de Soleil.” 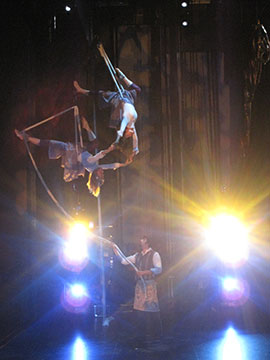 Asked to describe what he does, he responded simply, “I travel the world flying people on wires.” When first contacted, he was waiting out a tropical storm in Haiti following a challenging outdoor production of “Aladdin” in a Port au Prince park.

When Peter Pan flies in through the window or the magic carpet in “Aladdin” lifts off bearing Princess Jasmine, it is not enough that they should simply rise, Auld pointed out. “They need to lift off as if they have been plucked up by the wind.”

“It’s the science of engineering art,” Auld said, and he enjoys both aspects.

A two-time BGSU graduate in theater, Auld now juggles three-plus positions: assistant professor in the fledgling theater department at Kent State University – Tuscarawas, where he is also in charge of the technical crew for the new, 1,100-seat Performing Arts Center; a flying director at Hall Associates Flying Effects, in Chicago, specializing in the flying of performers on wires for live productions, recorded media and circus arts events; and head of Auld Entertainment, "dedicated to theatrical consulting and production work, and to the education of all theatrical practitioners to ensure a better standard in the safe, professional execution of our work."

Professionally he has worked in nearly every U.S. state and countries all over the world, from Canada to Dubai. He served as technical director for the Lookingglass Theater Company in Chicago, venue technician at the La Jolla Playhouse in San Diego and as a flying director at the Istana Budaya National Theater in Kuala Lumpur, Malaysia, at the behest of the Malaysian royal family.

In the midst of all this he found time earlier this summer for a reunion in Bowling Green of his Theta Alpha Phi theater fraternity, and keeps in touch with theater department faculty.

The bonds forged in a theater program go deep, he said, and those carry over to his new role as a faculty member.

“I enjoy a much different relationship with my stage crew and my students than you might have in other disciplines,” he observed.

Now married and the father of a 10-month-old daughter, Auld has cut back his work with Flying Effects from 50-60 shows a year to about two a month, but his enthusiasm for his work and his bond with fellow theater folk make it hard for him to say no. He recently rigged a complicated new show by the New York circus theater company Imaginaerial called “The Curious Case of Killian Cog,” about a time-traveling watchmaker searching for a lost love.

Safety is always a prime concern in the “flying” business. Auld is one of only a few dozen people in the world recognized by the Entertainment Technician Certification Program as a trainer and rigger for theater. In addition, he serves on the American National Standards Institute national working group on rigging, devising the national safety code for rigging in the United States.

“The litmus test for any ‘flying’ is that it must be safe, functional and artistic,” he said.

While most people would be daunted by the prospect of flying people or tons of equipment high above the stage, Auld takes it in stride. “I have a high tolerance for risk,” he joked. “It suits my personality.”

This was demonstrated during the three years between his bachelor’s and master’s degree programs at BGSU, when he spent his time jumping out of airplanes with the U.S. Army Airborne Corps.

His can-do attitude was nurtured during both his stints at BSGU, where he found a lively scene of formal and informal theater productions.

“What I experienced at Bowling Green was a culture of ‘yes,’” Auld said. “I didn’t appreciate it so much when I was there but now I realize that the people who were on the faculty — Brad Clark, whose first year was my senior year; Steve Boone (now department chair); Margaret McCubbin (costume designer who was his adviser), Ron Shields (now professor emeritus of theatre) — were all fantastic influences. They and the other students were the kind of people who, when you’d finished a show and it’s 2 a.m. and you say, ‘Hey, you know what we should do?” and everybody says yes, would also say yes at eight o’clock the next morning. Their default was yes.

“The only thing that stopped you was you. The fact that it wasn’t easy was its own vetting process.”

The same was true when he returned to BGSU after the Army for his master’s degree and worked with Jann Graham Glann at the Huron Playhouse at BGSU Firelands.

“Jann is one of the few people in life who still says yes,” he noted.

“Another thing I realize now about the theater program is that it was an open department,” Auld said. “It functioned as a meritocracy. Anyone could audition whether they were a theater major or not. You had to be good to get the part, and that made you work harder and motivated you to improve your craft. That attitude prepared me for what I’m doing now.”

However, it was not a smooth segue to his current profession, he recalled. After graduating in 1994, he pursued a career in acting instead of technical theater.

“I spent two years touring in theater. Jobs in the entertainment industry may last only three months and it’s wildly exciting but I wasn’t asking the right questions and I didn’t know which questions to ask.”

At that point he went on active duty with the military and, upon finishing his commitment, decided it was time for a “reset.” He returned to BGSU for graduate school and realized his true calling was behind the scenes instead of onstage. He honed his technical, design and choreography skills, which, combined with his knowledge of acting, gave him a specialized skill set.

This was further specialized when he next earned a master of fine arts at Northern Illinois University, where he learned the technical skills of rigging.

Since then he has worked continuously, with major movie companies, circuses, theater productions, even the famed tightrope walker Nik Wallenda, in 2008. “It’s an eclectic group of people,” Auld observed in an understatement.

“I think it’s a charmed life,” he said happily.