Heroes among us: Film faculty Jose Cardenas was combat photographer

BGSU faculty member Jose Cardenas is a favorite of telecommunications students for his hands-on teaching style and professional credibility as a film and documentary cinematographer. But Cardenas is an equally high achiever in his other, lesser-known career—the Air Force Reserve. 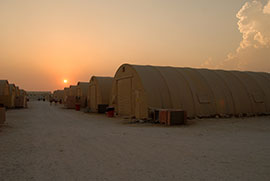 Cardenas recently reflected on the 25 years he worked as a combat photographer, videographer, writer and public affairs officer for the 180th Fighter Wing, 4th Combat Camera, and the 445th Airlift Wing, Wright-Patterson Air Force Base. He retired in August.

During his most recent deployment to Iraq in 2010, Cardenas spent seven months acting as spokesman for a lieutenant general stationed in Baghdad, serving as liaison to the international media and training the crew of the state-run television media in Iraq.

As liaison to the global media, Cardenas traveled to military hospitals with news crews reporting on the casualties of conflict. Often they shared a flight with injured soldiers. Such trips were the most difficult aspect of his latest deployment. Most soldiers who suffered life-changing injuries, or were killed, were the same age as his two daughters and his students at BGSU, Cardenas said.

Despite the severity of such injuries, Cardenas was moved by the positive attitudes of soldiers who might ask for a drink or blanket for the person next to them, but never for themselves.

“It was eye-opening,” Cardenas said. “On those flights, not one (injured) person would complain. It was not like, ‘My life sucks now.’ The injured person would help the person next to them. Everybody just took care of the other person.” 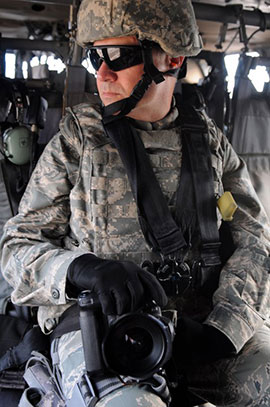 Cardenas was stationed at a temporary forwarding base called Union III. The area was within the designated safe “Green Zone” and the region was considered stable enough for the Army troops previously stationed there to exit. Even so, there were daily incidents of violence. All personnel on base kept a set of body armor and a helmet near at all times. Despite such cautionary measures and his experience capturing the reality of war, Cardenas said he felt so strangely desensitized to the nearby bombings that he perceived them as merely an annoyance.

“I thought, ‘I should be scared, but I’m really not,’” Cardenas said of the bombings.

With previous deployments into combat zones as a photographer and in his ongoing work on motion pictures and documentaries, Cardenas has mastered his role behind the camera. That background helped Cardenas relate to the international correspondents as a media liaison, and help some of his military colleagues overcome their uneasiness with the media.

“The media liked me. I got them what they wanted because I knew what they wanted,” Cardenas said. “We both wanted to get information out quickly and truthfully. The media is not the enemy.”

Cardenas also had plenty of opportunities to keep his teaching skills fresh. He designed hands-on workshops for Iraqi broadcast journalists related to camera operating, video editing and reporting. Though their government largely controls the messaging of the media, Cardenas explained that the daily duties of the Iraqi broadcast journalists generally match those of American journalists. Iraqi journalists were enthusiastic about capturing every milestone and minor event related to the transition of peacekeeping operations from American military to Iraqi police and military.

Duties during deployment were incredibly demanding, Cardenas said. “I was working seven days a week for seven months and 14 days. It took me a year to feel normal again.”

For as long as he can remember, Cardenas thought it might be cool to join the military. His parents discouraged him from joining directly after high school, so he settled for ROTC while studying cinema and photography at The Ohio State University.  He considered enlisting again after graduation, but delayed for an assistantship to complete his master’s degree without student loan debt. 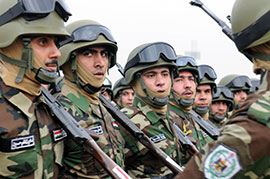 He was working as photojournalist at a Toledo news station when a story assignment took him to a military air show and reignited his interest in the service.

“The next thing I knew, I was raising my right hand,” Cardenas said.

In 1988, Cardenas joined the Ohio Air National Guard 180th Fighter Wing in Swanton, Ohio. After serving three years, he joined the Air Force Reserve 4th Combat Camera Squadron in Riverside, Calif. while continuing to work full-time in the greater Toledo area. The flexibility of the military reserve allowed him to expand his experience in broadcast news, network television pilots and film.

He spent two years working full-time as a videographer on campus at WBGU-TV, a role that involved training and educating BGSU students interested in film and television careers. He left to move to southern California, and earned even more local documentary and major film credits before returning to WBGU-TV in 2001.

Since joining the BGSU telecommunications faculty full-time in 2003, Cardenas has earned quite a following of students. Plenty of them admire his civilian resume, which is packed with ongoing work as a cinematographer in films and documentaries. The hands-on work he assigns in the classroom reflects the latest industry techniques. He is known for frequently hosting special seminars related to the craft of video featuring well-known industry professionals.

Even so, few of his students know much about his military background.

Cardenas’s military service was a surprise to Eric Miller ’10, an Army intelligence officer with a minor in telecommunications at BGSU. Cardenas never spoke of his military involvement, even as Miller enthusiastically took four of Cardenas’s courses and interned in 2008 with him at the production company, Shadowcast Pictures.

“To be in one of his classes, you were getting years of experience and knowledge to start your beginning at a more advanced level,” Miller said. “He’s not one of those teachers who just stand and lecture. Jose would tell us rookie mistakes to avoid. It was very hands-one, very interactive. He just created a very good environment for all the students to learn together and work as a team.”

It wasn’t until Miller noticed some combat photos in Cardenas’s office that the faculty member discussed his military background. The conversation reignited Miller’s own longtime interest in service, and he ultimately enlisted after earning his bachelor’s degree.

“Generally people in the military put off this persona of being strict, and Jose is just so laid back. You wouldn’t imagine,” Miller said. “I was impressed. To be in the military that long, you have to be very resilient. You have to be a hard worker. You’re going to always be busy. There’s always something that needs to be done.”

Whether he’s using video, photography, or words, Cardenas uses the same word to sum up his eclectic resume: storyteller. His military involvement has provided some of his favorite and most unexpected stories.

Just ask him about the flight crew member who made a habit of baking cookies on combat-bound routes. As an air medic, nothing in the guy’s job description required him to invoke Betty Crocker in the sky, it was just his way of bringing a comfort of home to soldiers who likely wouldn’t be back there for months.

“I’ve traveled all over the world, shot video and stills,” Cardenas said of his military career. “And for 25 years, it has been a honor to serve with men and women doing amazing jobs that nobody knows about, really.”