The many languages of learning

By Ian Robinson and Bonnie Blankinship

A BGSU faculty member since 1989, Bingman studies the relationship between the brain structure called the hippocampus and spatial navigation and memory in birds. He is credited with launching the field of avian hippocampal research, and taking a comparative approach to brain function and organization.

At the Experimental Medicine and Biology Institute in Buenos Aires, one of the most prestigious biomedical institutions in South America, he brought his sights down to earth, exchanging his usual subject, the homing pigeon, for toads.

Working with Dr. Rubén Muzio, a research associate and professor of psychology, Bingman observed and labeled brain activation in toads as they were faced with a challenge to learn and remember where to find water. 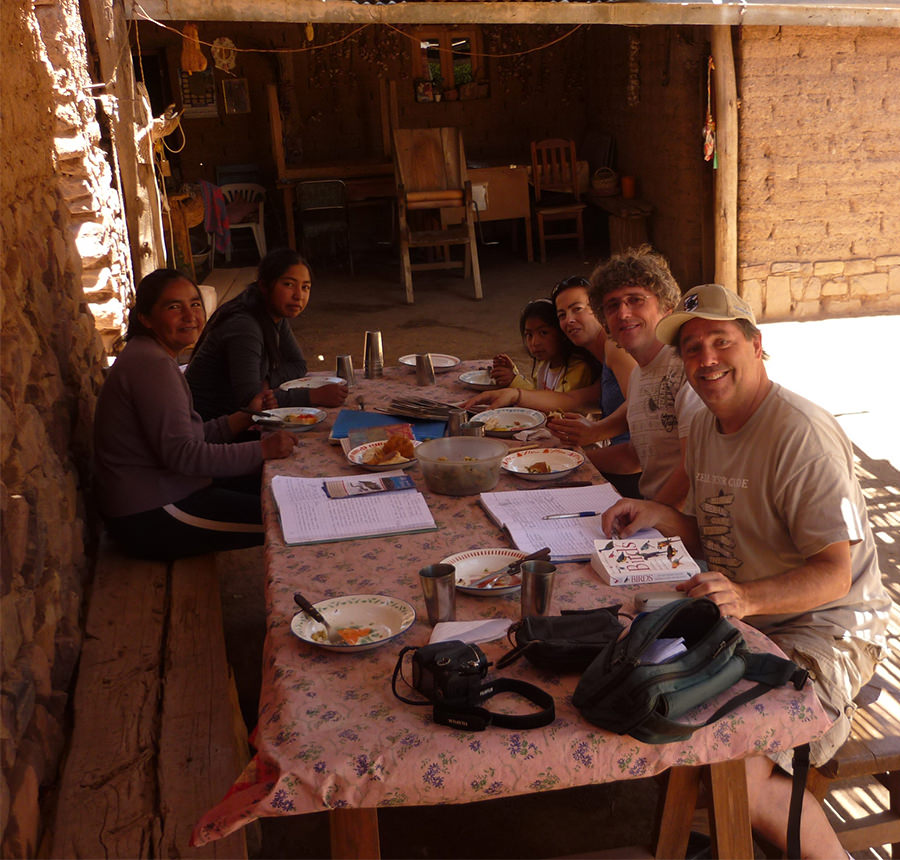 Using neurobiological techniques, they examined proteins the brains produce during these spatial challenges, which are regulated by a class of genes called "immediate early genes."

"Our results demonstrated a robust, hippocampal-dependent spatial memory in toads," Bingman said. "We see that, with respect to space, the hippocampal systems are similar in birds, toads and mammals.

"We're developing a much richer understanding of how vertebrate brain organization compares across different vertebrate groups, comparisons that reveal both adaptation and conservation of ancestral traits."

The experience of researching and teaching abroad was a "fundamental reset" to his approach that he will bring back to BGSU, he said.

Although his graduate course at the nearby University of Buenos Aires, "The Neurobiology of Spatial Memory," was taught as an English-Spanish mix, he still needed to take special care that the students were grasping his meaning. He also taught an undergraduate class entirely in Spanish during a weekend course near the end of his stay, at Mar de Plata.

"For my undergraduate students I learned that I need to be more creative in a constructive way and more flexible in order to connect with them," Bingman said. "And for my graduate students, I bring back new research techniques and questions that enable a whole new set of opportunities."

While in Argentina he also got a firsthand look at many native bird species, and finished his sabbatical travels with stops to reconnect with colleagues in Germany, Italy and New Zealand.

To Salim Elwazani, interim chair of the Department of Architecture and Environmental Design, the objectives and rewards of participating in the Fulbright program are much deeper than strictly conducting research or teaching. They involve the intellectual and social exchange that occurs as part of immersing oneself in another culture.

"As faculty, we are members of society, not just experts in our fields," he said. 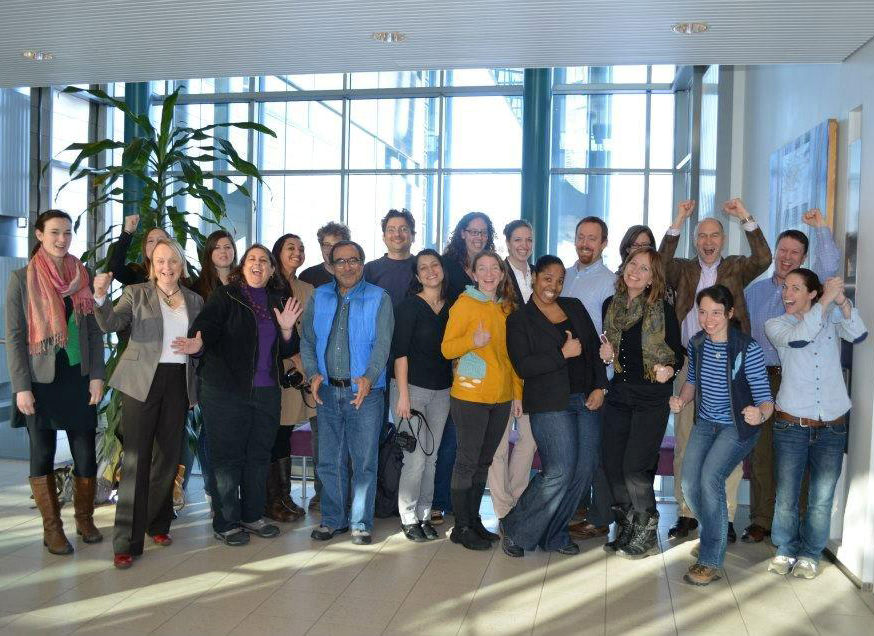 His experience last academic year in Helsinki, Finland, at Aalto University, named after the legendary Finnish architect Alvar Aalto, was rich in discovery and communication. Not only did he experience Finnish culture but, because of the unusually large number of international researchers and post-doctoral fellows at Aalto and peer institutions, enjoyed a multicultural conversation.

Already a Fulbright Scholar to University of Bahrain in 2001-02, Elwazani was named the Fulbright-Aalto University Distinguished Chair for 2012-2013. Guidelines for the highly selective program state: "Candidates should be eminent scholars and have a significant publication and teaching record." Of the roughly 900 Fulbright awards in 2012-13, only about 20 were Distinguished Chairs.

Elwazani's research focused on exploring the international adaptability of "historic context," a preservation planning strategy practiced in the U.S. that aims at producing an umbrella of intelligences that guide preservation planning of historic areas, cities and regions. He integrated it as an exercise in a course he taught, but more pointedly in a series of studies outlining the structure for applying the strategy in areas and cities in Finland.

Aalto was a good place to observe other ways of approaching the heritage conservation discipline. "The Finnish are internationally renowned for their architecture and design," he observed.

In fall 2012 he taught a heritage conservation (historic preservation) course and conducted a doctoral seminar with Prof. Kimmo Lapintie of Aalto and Dr. Mina Di Marino, a post-doctoral researcher. In spring 2013, he got involved again in the doctoral seminar in an urban design lab he co-taught with Di Marino, who he said brought refreshing planning insights rooted in Italy, her native country.

Elwazani admires the role that the Finland's Fulbright Commission (also called Fulbright Center), a group of Finnish and American volunteer trustees, plays in supporting international exchange. The center staff, led by the Director Terhi Mölsä, Program Manager Aki Kalliomäki, and others reflects the ideals and ambitions of the country toward international education. The center provided an extraordinary orientation program for incoming American Fulbrighters that involved multiple education events, site tours, and visits to the National Parliament, including meetings with representatives to discuss issues surrounding higher education.

"I was really impressed by these people," Elwazani said. "They are genuinely interested in higher education and research." In response to Fulbright Center's call, Elwazani served on a panel to discuss preparing graduate students going to the U.S., developed a statement defining the role of the Distinguished Chairs, and advised on matching Fulbright candidates and host institutions.

Elwazani had face-to-face discussions with Fulbright Center staff as well as with colleagues and administrators at Aalto, including Antti Ahlava, head, and Aino Niskanen, a professor and research partner at the Department of Architecture; and Dr. Mari-Anna Suurmunne, head, and Leena Plym-Rissanen, manager of the International Relations Office.

"We had really frank discussions. It's a role I'm really proud of because it gave me the opportunity to enhance international education," Elwazani said.

Matt Kutz with his students in Kigali, Rwanda

Kutz, a former athletic trainer for USA Track and Field, teaches athletic training in the School of Human Movement, Sport and Leisure Studies, spent six months in Rwanda as the first and only person there training medical personnel to treat, care for and manage sport-related injuries.

Kutz seems to have a penchant for working in explosive parts of the world. In 2007, he went to Honduras to train medical staff preparing for the Olympics, only to find himself in the middle of a coup attempt. On a 2001 trip to Peru with a church group, a violent general strike erupted, paralyzing the country and trapping him in place. 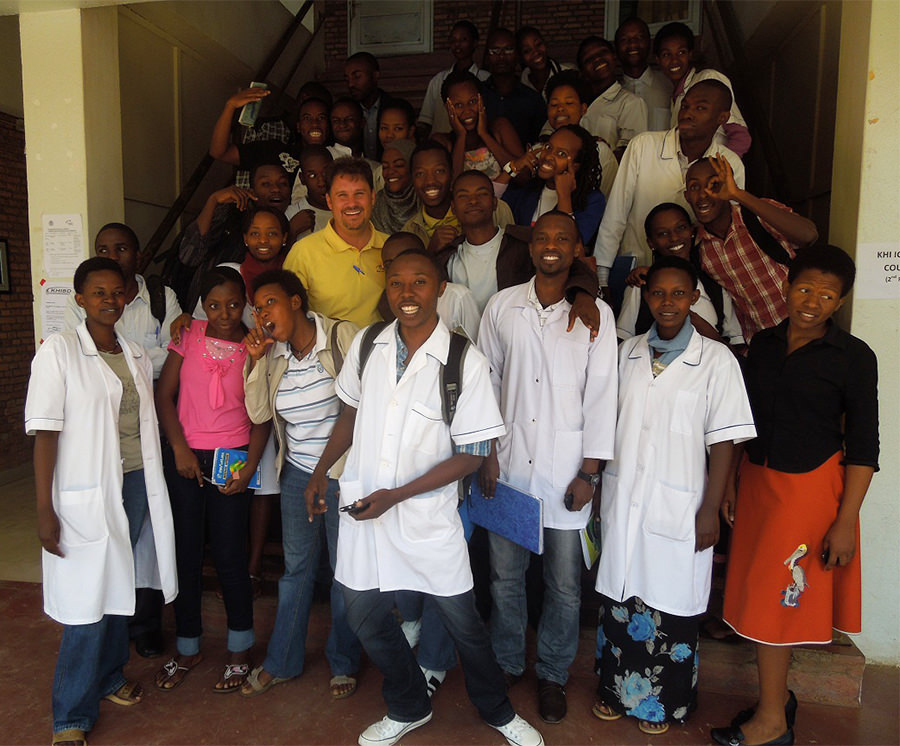 Matt Kutz with his students in Kigali, Rwanda

So, when he told his wife he'd been invited to Rwanda as a Fulbright Scholar, her reaction was understandably one of dismay.

However, Rwanda is now stable and working hard to overcome the ethnic divisions that led to the 1994 genocide, and the Kutz family of four headed for the capital, Kigali, now known as one of the safest and cleanest cities in East Africa - "and what a grand adventure it was," Kutz proclaimed. In addition to his teaching and outreach, his family was featured on HGTV's popular show "House Hunters International." Their episode is scheduled to air this month. (Look for an update about this.)

"Rwanda is highly focused on building a national identity, and a big part of that is uniting the country around national sports, such as soccer," he explained. "Now they suddenly have a need for medical professionals for their elite athletes.

"In fact, exercise in general is heavily promoted, and every government employee must exercise weekly at work, both to curtail health care expenses and to prevent illness. There's a big upsurge in health and fitness, and health care costs are coming down - but injuries are up."

However, there had never been any sports medicine training in the country. Teaching at the Kigali Health Institute, which prepares allied health professionals, Kutz found the students and staff unfamiliar with even such basic supplies as sports tape or elastic bandages.

"Teaching was very difficult," he said. "The courses were offered in modules, and I taught 40 hours a week from nine to five, lecturing the entire time. The students had few resources, no textbooks or computers, so they wrote down every word of what I said. Even though English has been the official language of the country for several years, for the students it's their third language after their native language and French, so I had to reinvent my lecture style. I also had to find a way to communicate the clinical component to the learning.

"It gave me new energy and new vision for teaching," he said. "My perspective is now changed. I learned to follow the 'KIS' mantra: Keep It Simple."

Despite the challenges of their study, "The students considered it a privilege and an honor to get an education, and they were so appreciative and respectful and so diligent. They always tried harder," Kutz said.

While he was busy teaching, his wife and sons were volunteering and teaching English in several local orphanages.

The Kutzes were able to cross traditional boundaries, he said. "We had many black friends. My family and I were the only mzungus (white people) most Rwandans had met who weren't missionaries, and the missionaries, who work in the villages, had never had Rwandan friends and colleagues. There was surprise all around when we talked about our experiences."

His Rwandan colleagues somehow learned of Kutz's latest book on leadership, "Contextual Intelligence," which has since then been nominated for an international leadership award. Much to his surprise they procured copies and organized a book signing.

"The line was out the door," Kutz reported.

And just before he left, he was invited to speak to Parliament and at the National Prayer Breakfast.

To continue to build the training and skill development he initiated, Kutz is working on arranging study abroad experiences for BGSU students in Rwanda next year and remains in contact with his colleagues there.