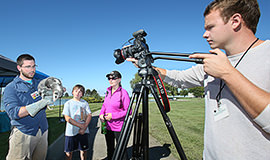 "When you do a documentary like this with wildlife, monkeys and snakes just get thrown at you by the jungle and you have to be ready for it."

According to seniors Justin Grubb and Alex Goetz, they were more than ready for the wildlife they encountered while on a trip to Costa Rica as part of a BGSU Stuart R. Givens Memorial Fellowship. The Givens Fellowship provides up to $6,000 to a BGSU undergraduate to support a self-designed, off-campus experience in a manner not otherwise possible through an academic program, regular summer job, enrichment program or study abroad program.

Grubb, who is majoring in marine biology, and Goetz, who is studying film production, spent three weeks in the Central American country in May shooting scenes for a wildlife and conservation show called "Running Wild." The show is the brainchild of Grubb, who says he came up with the concept in high school.

Grubb and Goetz initially paired up their sophomore year while working for "BG on TV" at WBGU. While there they shot several episodes of "Wild Adventures with Justin Grubb." Eventually they decided it was time to try to make "Running Wild" a reality.

"I went to Costa Rica in the summer of 2012 and did an internship there," Grubb explained. "While I was there I noticed all the crazy things I could film and make the TV show. I was almost scouting for the show while I was there, meeting people and looking at locations."

The pair explored their options, investigating Kickstarter, the online fundraising website, and various grants, but it was a fellow student who gave them the idea to pursue a Givens Fellowship.

"The odds were stacked against us," Goetz said. "You're supposed to have a year left in school and I'm graduating in December." It's also unusual for one fellowship to be shared between two people. After what Goetz called a nerve-racking interview, the pair got the go-ahead to pursue their project.

Equipped with two DSLR cameras and a tripod, they left for Costa Rica on May 4. After a boat trip to Bahia Drake and an ATV ride, they found their way to the remote town of Tamandua and the biological station there.

"There was no electricity and no cell phone service," said Goetz. "Tamandua is a town of just 200 people who don't speak any English. In the rain forest where we were staying everything was lit by candles and we slept under this shelter someone had kind of built."

The lack of gear made it easy for them to traverse the country. Their travels took them to Manuel Antonio on the western coast of the country, the marine park in Puntarenas, Curu and the cloud forest of Monteverde. They even climbed to the top of the continental divide.

When it came to filming wildlife, Grubb and Goetz say they had a long wish list.

"We were going to the most bio-diverse place on earth, so we could see almost anything and it would be awesome," Grubb said. "We saw a quetzal, one of the most endangered birds in the wild, and it was a breeding male. All types of monkeys, including a squirrel monkey, the most endangered primate in Central America."

The pair even described their rare experience with a sloth's bathroom habits, a story that elicits a lot of laughter.

"We saw a sloth defecate," said Grubb. "It happens once a week, in the middle of the night, near the base of the tree."

"It sounds so stupid when we explain it to people," Goetz said, laughing. "But it's really a big deal."

But what they were really looking for was snakes.

"It was weird; when we looked for them we couldn't find them, but then they found us," Goetz said. In fact, Goetz had an up close and personal encounter with one of the reptiles.

"We were sitting on a bench near a beach taking a break and out of the corner of my eye I see this 4-foot-long vine snake on my leg. I screamed and it took off."

Grubb took off as well, chasing the snake through the bushes and finally grabbing its tail, all while it was trying to sink its fangs into him.

"He got it calmed down and started talking about it," said Goetz. "Then when we got hired at the Toledo Zoo we saw they had a vine snake, and that it was venomous, which we didn't know at the time."

Much to the dismay of their guide, both men inched their way closer to a yellow-sided green pit viper, which is very venomous, in search of the perfect shot. Grubb also scuba dived with sharks and wasn't afraid to eat a few insects on camera.

Save for a case of sun poisoning, and a few snake bites, the pair left Costa Rica relatively unscathed and with close to 200 gigs worth of video footage.

After getting back to the United States, they made a website for "Running Wild." Grubb emailed the link to his professors, old high school teachers and the director of the Toledo Zoo, Jeff Sailer. Sailer reached out and said he wanted to meet them.

"From there they approached us about doing videos for the zoo," said Goetz. "When we got back we never expected that."

Both have since been hired by the zoo, Grubb as a biologist and Goetz as a videographer. The pair has already produced several videos.

As for "Running Wild," Goetz says he's going to keep editing and promoting the series online, building their fan base and looking for avenues to get it on the air.