After what host Brad Cresswell described as "a long, harrowing process," the "New Music from Bowling Green" radio show was ready to launch BGSU musicians into the international spotlight on Oct. 6.

Putting together the show is an "organic process" but is also "a lot of work, time and investment-which is why not a lot of people do it," Cresswell explained. "The fact that we've been able to band together and make it happen is something spectacular.

"Bowling Green State University is the only university I know capable to do a radio show at this level."

He and Dr. Jeffrey Showell, dean of the BGSU College of Musical Arts, agree the stress is worth it. "It's a thrill to know that the two years of work we've put into this series will be heard and appreciated by listeners all over," Showell said.

Cresswell and Showell met in September 2011, both interested in bringing living classical composers to the radio.

Cresswell remembers Showell "wanted to raise the profile of the University using media and new media, and also taking people on the road. . . . So it struck me-why couldn't we do a radio show with Bowling Green?"

The College of Musical Arts has the talent and capability to star in the nationally syndicated 13-episode radio series, he reasoned. The New Music Festival and MidAmerican Center for Contemporary Music, which will provide most of the show's music, each have 30-year histories behind them.

"Our first international market is Dubai, and we hope to move into other English-speaking foreign countries in 2014," he said.

"It's about a 50-50 split between the recordings of the Bowling Green Philharmonia and Wind Symphony and the archives of the New Music Festival," said Cresswell. Three episodes contain the music of Jennifer Higdon, one of BGSU's most successful alumni.

Higdon has won a Pulitzer Prize and Grammy Awards, given a convocation address for the BGSU College of Musical Arts and been honored as one of the most successful BGSU alumni during the University's 100th anniversary celebrations.

Coming back to BGSU gives Higdon a chance to eat some Myles pizza and hear the "really interesting stuff" coming out of the college, the composer said.

"What BGSU has that most schools don't is the New Music Festival," she noted. "You get to hear a good selection of what's going on around the world." 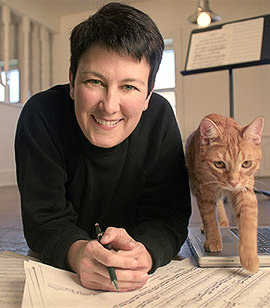 All the pieces featured in her three-episode series "have some sort of connection, even if it was remote, to Bowling Green."

Listeners will hear Higdon's love of melody in her compositions along with the "two primary hallmarks of my music: rhythm and a clear pulse."

"Everyone tells me my music sounds very American-I'm not sure what that means, though. I know I would be in trouble having lived in America all my life and I sounded Russian or French," she joked.

Higdon, Cresswell and the College of Musical Arts faculty are excited to hear the program air.

"We are the direct conduit between the composers and listeners," Cresswell explained. "Radio engages your ears, and there's where all this music lives, in the ears of the listener.

"We're doing something different and worthwhile. That's really where the value of presenting new music comes in. … You're taking the genre into the 21st century and beyond."