Theresa Brand, 2013 Parent of the Year

Nominated by her daughter, Lauren.

By Amy West and Kristen Grom

Theresa Brand has held many titles over the years; this past weekend during the BGSU vs. Murray State football game, she added "Parent of the Year" to her list of accolades.

"She is as strong as they come, willing to sacrifice all for the ones she loves," Theresa's daughter Lauren Brand, a junior from Massillon, Ohio, majoring in biology, revealed about her mother in her nomination essay. 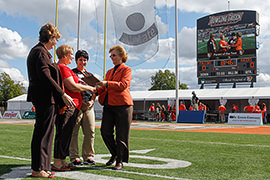 Each year, Bowling Green State University students are provided an opportunity to nominate their parents for the title of "Parent of the Year." Students submit a short essay describing what makes their parent the best candidate for the award. The winner is announced at the football game during Family Weekend.

The nominees are evaluated by judges in five different areas: provides ongoing support, models admirable traits, makes personal and/or professional sacrifices for the family, achieves in light of hardships and continues to empower and challenge their child.

"The award was established in order to stress the importance of family in each student's educational journey," said Chris Bullins, associate dean of students.

In June 2012, Theresa's husband and Lauren's father, Tim, was hospitalized for four and a half months. During his hospital stay, Theresa woke early each morning to get her three children, Lauren and twins Annelisea and Seth, off to school, then headed to the hospital to spend time with Tim and meet with his doctors to discuss medical care. She'd leave the hospital and hurry to work, leave work and hurry to the school to pick up the children, hurry home and make dinner and settle the children with their homework, hurry to the hospital while the kids finished up their studying, hurry back home to pick up the kids and take them to the hospital to say goodnight to their dad, hurry home so the children could go to bed, and often found herself back at the hospital one final time if Tim needed something during the night. During these months, there were often nights when Theresa only slept a couple of hours.

Lauren described her mother's dedication to her father: "My mother nursed him through the illness while working, caring for her children and being a supportive parent," she said. Juggling the responsibilities of both mother and father, Theresa fought to keep her family going. The frantic schedule she had kept while her husband was hospitalized continued as she suddenly found herself a single parent.

"It was through my children that I knew I had to go on," Theresa said. "They needed what they needed. It was my job to set an example for them."

When overwhelmed by daily responsibilities, she often says to herself, "You can do this, Theresa, it is just one more thing." In addition, she has her "worry papers," which are worries she jots down on a scrap of paper, folds up and puts somewhere. Later, when she finds that particular worry paper and the worry has passed, she is comforted by the fact that she overcame another obstacle.

Theresa said Tim is what makes this story so special.

"Tim Brand made a difference in every life he touched, and the ripple effect will go on," said a family friend.

Tim has been called "The Pied Piper of Children," and his home was referred to as "Camp Brand" in the local community. He spent many years involved with the Boy Scouts and local schools. Tim was always willing to "do one more thing, for one more child."

While Theresa is humbled by this award, Lauren understands better than anyone what her mother has been through.

For many students, having their parent obtain the title "Parent of the Year" is an honor, but for Lauren, the title runs deep in gratitude.

"My mom deserves this award as a thank you that I would never be able to communicate effectively."