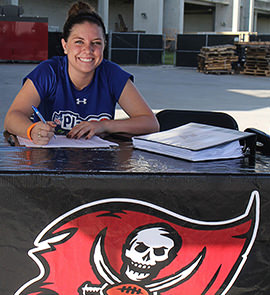 How do you summarize a summer full of experiences, travel, people, and places that surpass any expectations I could have ever had? I'll give it a try.

Sweaty, early morning exhaustion and 300 kids anxiously and noisily chattering, lined up waiting for me to let them in to the biggest and best experience of their lives, and maybe mine too. This was a common reoccurrence for me this summer as a camp operation intern for NFL Play60 Character Camps.

Let's go back to where it all started.

I had never attended a job fair at BGSU before, but I figured when the Sport Management Alliance hosted one in spring 2013, and my expected graduation was summer 2013, I better get my résumé polished and my feet wet.

What I didn't expect was a call back and same day interview with a representative from the job fair, especially not one associated with the National Football League. Safe to say I was intimidated, but put on my game face.

About a week later I was offered a summer internship with the Muñoz Agency based out of Cincinnati, Ohio, as a camp operations intern for the NFL Play60 initiative. Cincinnati Bengals hall of fame offensive lineman Anthony Muñoz is the agency chairman.

I was too excited to even set expectations, all I knew was that my dream job might have just fallen into my lap. As an intern my role was to communicate with different NFL team representatives to schedule camps, arrange facilities, food and drink for campers and coaches, find volunteers, and book NFL players and alumni appearances for each camp.

I was assigned duties for camps with the Tennessee Titans and Tampa Bay Buccaneers. I would have the opportunity to travel to four of 12 camps hosted over the summer in Nashville, Indianapolis, Miami and Tampa.

The coolest thing about this summer wasn't even working with the NFL, which is definitely a huge deal, or meeting Colts rookie wide receiver Jeremy Kelley, but that these camps weren't typical football camps, they were "Character Camps."

This means in addition to the NFL Play60 initiative to promote kids being active for 60 minutes a day and learning basic football skills the campers would also be exposed to learning different aspects of character and how they come into play in sports. Some examples of character traits the campers learned were respect, faith, honestly, responsibility, and honor.

We invited boys and girls ages 9-13 from underserved areas of the community, local Boys & Girls Clubs, YMCA groups, and community outreach organizations. These were kids who typically had never experienced football before, let alone in an NFL venue, plus have an opportunity to meet players and coaches-a lot like me before this internship!

I have never seen such a positive and immediate impact on another person's life as I did throughout my summer traveling to Character Camps.

Kids are like sponges and really took on the character traits we taught them in exercises and character stations. Games like race-base, a dodgeball-esque activity, proved they were capable of having fun while being active and demonstrating honesty and accountability for their actions. It was incredible seeing kids help each one another.

Camps in Miami and Tampa were held in early August, and as you can imagine summer in Florida is sweltering. But I typically didn't see kids complaining about the heat or being tired. Instead I saw lots of high-fives, older campers walking youngsters to water stations, and coaches who had become invested in the kids they had only known for a few hours.

I have truly been blessed to see not only how a sports entity as great as the NFL operates and organizes community engagement, but also witness young lives change for the better right in front of my eyes.

My summer experience has been truly amazing, and I have learned some valuable lessons from my experience: Get involved, go to job fairs, give out your résumé like it's a hot potato, and give back to the kids who need it most. They truly are some of the most captivating and courageous minds you'll ever come across.

Some other opportunities included being a part of conceptualizing with new clients on design, logo, and branding, a photo shoot for the Skyline Chili Webstore, a tour of the Great American Ball Park (Home of the Cincinnati Reds), and working with the Anthony Muñoz Foundation annual hall of fame camp.

I aspire to continue working with non-profit and community organizations and partnering with professional sport entities to host events similar to Character Camps.