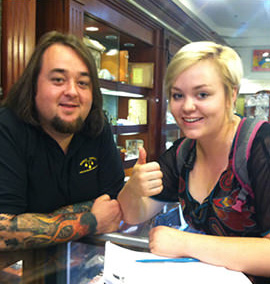 My summer was spent as an intern on the TV show "Pawn Stars." This meant going to live in Las Vegas for two months, be away from everyone I knew and work on the show.

At first it was really intimidating. Everyone on the crew had been there for such a long time and were all very close friends. I also had never worked on such an intense show before, which was a little overwhelming. But after a couple weeks I caught on, and everyone there was super helpful.

My director, Shannon Biggs, was such a great help, almost like a second mom or an older sister. She taught me how to be a strong woman in television and to focus on things better. There are not many women working in TV, but I was lucky- on my crew three out of the 10 people were women, and all of them were willing to teach anything and everything I ever wanted to know.

Not saying the men who work on "Pawn Stars" weren't amazing as well, they taught me almost everything I know about equipment and studio life.

Because of my time on "Pawn Stars" I feel like I am very prepared to enter the entertainment field when I gradate from BGSU in December. I honestly can't believe I got on the show and had the honor of working with such an amazing cast and crew.

And in case anyone was wondering, Chumlee is really nice and Rick is way too smart. Thanks again to Shannon, Jairus, Chase, Blue, Jill, Joe, David, Ben, Freddy, Adam and everyone at Leftfield Pictures who helped me grow up.