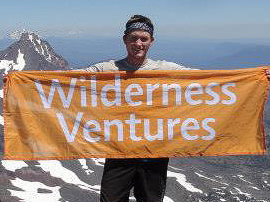 During the summers of 2011 and 2012, I worked as an Orientation Leader and loved every minute of it, but I wanted to try something new for 2013.

I have always appreciated nature and the unlimited possibilities of the outdoors, so I wanted to experience it firsthand. In the fall of 2011, I traveled around the United States on BGSU's GeoJourney program, which gave me a lot of experience, but it was as a student.

Without a doubt, while on GeoJourney I saw some of the most beautiful scenery in my entire life, but I wanted to experience the outdoors in a different way. I began looking at outdoor leader jobs with summer camps and decided one day to Google "Outdoor Adventure Jobs." After some browsing, I stumbled upon the company Wilderness Ventures. I was captivated by their website and amazing outdoor trips, so I applied. I was fortunate enough to get the job as a trip leader. This would give me a deeper appreciation for the wild, as I would be instructing others through it, instead of being instructed myself.

Once training was over, I began the drive from Wyoming to Seattle, Washington, with my co-leader. I was leading two different trips, with the first trip beginning around the third week in June. I was definitely excited to be thrown into the backcountry, instead of the front country routes that my adventure on GeoJourney had taken me through.

Puget Sound, my first trip, was for students in seventh through ninth grade. I had eight students from all over the United States. They flew into Seattle, where we picked them up at the airport to begin our three-week adventure trip in Washington!

We traveled to the Washington coast and backpacked for four days on the Olympic Beaches, white-water rafted the Hoh River, and took a three-day sea-kayaking trip in the San Juan Islands. Additionally, we canoed on Ross Lake in the North Cascades National Park, hiked up Desolation Peak, and spent another day white-water rafting the Skagit River. Once we dropped off the students at the Seattle airport, we spent a day and a half relaxing and prepping for our next three-week adventure. 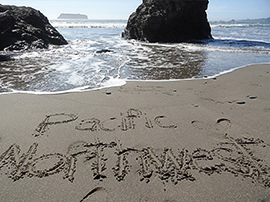 Our second trip, called Pacific Northwest, was for students in grades nine through 12. This trip was slightly smaller, with only five students, and had some similar adventures to the Puget Sound Trip.

This time around, we started with a five-day backpacking trip in the Three Sisters Wilderness of Oregon. The highlight was summiting the snowcapped South Sister at 10,358 feet! Following this incredible backpacking section, we spent two days white water rafting on the Deschutes River. We quickly headed up to the Olympic Beaches and hiked for another four days. The final adventure was another three-day sea-kayaking trip in the San Juan Islands.

By the time the trips ended, it was already the second week in August, and I was preparing to leave the wilderness and head back to "civilization" in Ohio. As I sat on the plane back, I reflected upon my incredible summer with amazing views, adventures, and students. There comes a big responsibility when providing a safe and fun environment for five-eight teenagers, and I learned the balance of having stern rules and allowing teenagers to explore. It absolutely gave me the experience I was looking for!

Working with teenagers over the summer has given me more confidence as I head into my student teaching at Bowling Green Middle School. Furthermore, I learned more about outdoor living skills including cooking over a stove (we didn't cook over fires each night), where to set up camp, navigating a topographic map, and even the rather disgusting; where to use the restroom.

I am thrilled about the potential of travelling back to the Pacific Northwest. While everyone talks about traveling to Europe after graduation, I plan on finding the beauty within our own country. Some things just require you to step outside your comfort zone and go for it. Jawaharlal Nehru sums of my philosophy on outdoor adventures by saying, "We live in a wonderful world that is full of beauty, charm and adventure. There is no end to the adventures we can have if only we seek them with our eyes open."

If you have any questions or comments about my summer experience, please email me at mreilly@bgsu.edu. I would love to share more details about my incredible trip!