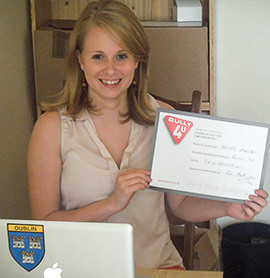 I recently spent eight weeks of my summer in Dublin, Ireland, interning for an organization called Bully 4U, an anti-bullying service for Irish schools.

The organization goes into schools for student workshops, parent information evenings and teacher in-service training. While working for Bully 4U, my boss was also starting up another organization called Workplace Bullying Solutions, which offers a similar service for bullying in the workplace.

My position at Bully 4U was primarily focused on social media marketing and web design. Truth be told, prior to this summer I knew next to nothing about web design. I got nervous in the Skype interview and when my potential employer asked “would you have any problems with transferring a website?” I blurted out “NOPE!” —thinking that he would have some kind of plan and step-by-step process already laid out for me. He didn’t. So, I spent the first several weeks of my internship watching and reading tutorials on web design and sending messages to my sorority sisters for advice.

My weekdays were spent trying to look calm while I frantically searched the Internet for what to do next, but my evenings and weekends were spent having fun with the other 15 interns in my program. 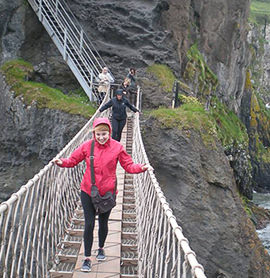 We were all from different parts of the U.S. with different placements in Ireland. We traveled the country in our free time and got to see some of the most incredible places. My favorite weekend was spent in Belfast, Northern Ireland. We visited the Titanic Museum and took a trip to the Carrick a Rede Rope bridge and the Giant’s Causeway. The Giant’s Causeway is my absolute favorite site in Ireland. Volcanic rock has mysteriously formed in a pattern that lead people to believe that a giant built a bridge or “causeway” to Scotland that had fallen in a giant battle. Whatever caused the formation of the rocks, it is the most beautiful site I have ever seen. I could walk out to the edge of the causeway and feel the sea breeze on my face while staring off at Scotland in the distance. It was gorgeous.

That was my first weekend in Ireland, and set a good precedent for what amazing things I would see during the rest of the summer. I saw castles, monastic ruins, bog bodies, and I even kissed the Blarney Stone. Ireland’s rich history and landmarks are the most impressive things I’ve seen in my life.

But, back to work! After plenty of trial and error, I finally got the hang of the whole web design deal and I built two functional and user-friendly websites while creating a social media presence for the business.

While in Ireland, I not only learned a new marketable skill to add to my resume, but I also learned so much about the culture and history of the country. The Irish are so passionate about their land and the stories it holds. I truly admire their determination to keep their ancient buildings standing and to educate their people about their history.

I had the most incredible time in Ireland. I would not, and could not, have had this experience had it not been for my parents, boyfriend and of course the opportunities that BGSU had to offer to me.