Mascaro on 'reinventing the news'

Mascaro on 'reinventing the news' 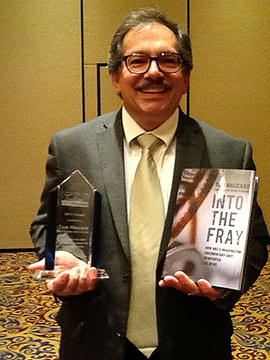 It all started in 1987. Dr. Tom Mascaro, then a graduate student at the University of Michigan, received a small grant to do a study of documentaries. So he traveled to Silver Spring, Md., to stay with some friends for free while he trekked to Washington, D.C., in search of a subject for his study. That's where he met documentary producer Bob Rogers.

Today, more than 25 years later, Mascaro, an associate professor in the Department of Telecommunications at Bowling Green State University, is the winner of the 2013 Association for Education in Journalism and Mass Communication (AEJMC) Tankard Book Award, considered the highest honor for a book in journalism and mass communications.

And it is all thanks to that initial interview with Rogers.

The inspiration for Mascaro's book, titled "Into the Fray: How NBC's Washington Documentary Unit Reinvented the News," stems from that 1987 interview. Mascaro began digging into Rogers' papers, but the story quickly grew.

The book became an in-depth story of documentary journalism. It's a biography within a biography, highlighting filmmaker Ted Yates and his crew who created the newsmagazine "David Brinkley's Journal," and then developed a collection of full-length documentary reports.

"When I got into the story, I realized Rogers was inseparable from Yates, and you couldn't do one without the other. And so that's when it became more about the unit as opposed to just one guy," Mascaro said.

The book mainly showcases Yates but also follows the professional lives of women and African-Americans in the crew, which was progressive back in 1961.

Mascaro did his most intensive research in 2004 through 2007, working directly with the original crewmembers and their families, and with records at the National Archive and several presidential libraries. He came to the conclusion that this group of people and their television reports did have a major impact on the journalism industry, mixing editorial courage with hard-hitting interviews, and eventually became the template for today's "60 Minutes."

The book was published in September 2012, and the positive academic response was almost immediate. Mascaro and his work have been mentioned in Journalism History, Gateway Journalism Review and American Journalism. Former anchor and managing editor of "NBC Nightly News" Tom Brokaw even commented on the book.

"Tom Mascaro has give us an important and instructive history of the storied place of Ted Yates and NBC News in the pantheon of documentaries. As a young man I was inspired by this work - and to this day I remain so," Brokaw said.

Mascaro submitted his book for several award competitions and was named a finalist in three. To be a finalist for the Tankard Book Award was an honor in itself, he said.

The AEJMC Convention was held in Washington, D.C., on Aug. 8. The three finalists for the Tankard Award participated in a panel during the convention. Convinced finalist Marine H. Beasley was going to win with her book "Women of the Washington Press: Politics, Prejudice, and Persistence," Mascaro was shocked when his name was called instead.

Mascaro became close with his subjects during the research process and strived to make them proud of his work and their story. Winning the Tankard Award gave him that validation and encouragement, he said.

"To have people read the research and read the book and first say that this is noteworthy and then to say, out of this year's crop, this is the best, it's like, 'Okay. I've connected with a key audience.' You couldn't ask for any more," Mascaro said.