Now, Weigl Works co-founders Mike Blasko '02, '09 of Cleveland, Ohio and John Kaplan '05 of Raleigh, N.C. are featured in a national commercial for American Express that was filmed in Bowling Green in June. The commercial is now airing.

Filming in Bowling Green made sense. Though the co-founders now live and work in different states, the inspiration for the business came when they were working together at LifeFormations, an animatronics company founded by BGSU faculty emeritus Dr. Gene Poor '73.

Weigl Works is a leading manufacturer of electronic control devices used for themed entertainment and attractions. Weigl's devices control animated characters at Chuck E. Cheese locations nationwide; attractions like Jeckyll & Hyde Restaurant and Bar and Ripley's Believe it or Not in New York City; amusement parks like Universal Studios in central Florida and Knott's Berry Farm in southern California, and various other attractions.

American Express handpicks small businesses to feature in much of their advertising. Blasko and Kaplan were approached for the commercial as early adopters of ReceiptMatch, an American Express service that simplifies expense management by linking images of receipts to online statements. Blasko and Kaplan travel often to serve clients across the nation, so they use the service constantly to stay organized.

"Mike, he's a thousand miles an hour. You get a thought, and he's already on to the next thing," Kaplan said. "I'm keeping the office running. He would hand over a brown paper sack of receipts and he would say, 'I'm sorry.'" 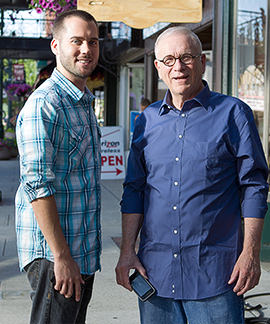 Even so, the business works well because the graduates of the BGSU Visual Communication Technology program bring different specialties to the table. Blasko works the technology and programming side, while Kaplan tackles sales, promotions, and multimedia projects for the company.

"Gene Poor said that you never hire two of yourself," Blasko said. "At LifeFormations we were very direct and honest with each other. John would say, 'Your paperwork sucks.' And I'd say, 'You can't wire a robot to save your life.' It made it easy to go into business together."

Working with LifeFormations clients, Blasko and Kaplan realized that the technology in control systems wasn't evolving.

"We were coming up against these great ideas, and we were confined by the technology," Kaplan said.

So they developed new products by working directly with Manfred Weigl, the Austrian engineer who built the "box" known as the standard of control systems. Their business is named for him. Weigl Works introduced a unique product line at a trade show in 2009 and has been growing ever since. Weigl Works and LifeFormations now complement each other: LifeFormations' artists and programmers build the characters and Weigl Works' devices control their choreography.

It was all on display when the Weigl Works entrepreneurs became television actors during the two days of filming in Bowling Green. Day one of the production included shutting down a residential street near downtown to complete moving shots of Kaplan driving a car with a sasquatch mannequin strapped on top, and staging an empty retail space on North Main Street as an antique shop. Day two of the filming was spent inside LifeFormations, and included several of its employees and their creations as extras.

It was fun to see their college town through the lens of the Hollywood. They especially got a kick out of the patio of Downtown Sports Grill being staged to resemble a European bistro, Blasko remarked.

"It was kind of exciting," Blasko said. "Just to see them take over this whole town, that was really interesting."

Blasko and Kaplan were students at different times in the VCT program, but their former faculty mentor has similar memories of them both. Talent and drive was evident in both Blasko and Kaplan, Poor recalled.

As students, Blasko and Kaplan were "already experts at what they do, and you are just providing a finishing school for them. That's really amazing. Both these guys are highly talented," Poor said.

Blasko started messing around with lighting, audio and show controls in his middle school's theater production program, so Poor recalled that as a BGSU freshman Blasko "could stand right with them and say, 'I can fix that and make that better.'" Kaplan impressed Poor when he spent part of his Hollywood internship teaching an entire production company to use new editing software: Final Cut Pro. Kaplan proved he could "walk, talk and dance with anybody who was in video production," Poor said. Both also had the opportunity to hone their video production skills as student employees at the PBS affiliate on campus, WBGU-TV.

"I've been so fortunate to have these kinds of people go through my life. You see them early on in their lives, and you know that they are going to be special," Poor said. "You know when the rare ones go through." 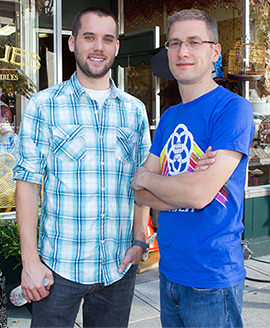 Pictured from left to right are Kaplan and Blasko, co-founders of Weigl Works.

Both Kaplan and Blasko credit co-op requirements in the VCT program for helping them to get a foot in the professional world. Both completed at least one of their co-op experiences at LifeFormations, and admired Poor as a mentor.

"I remember grabbing Gene Poor and saying, 'Hey I want to be the best video editor,' and that led to him taking me to LifeFormations to watch a shoot, which led to a co-op,'" Kaplan recalled. "It's a long, slow process until one day you look back and think, 'Wow, I've come a really long way.' You end up some place you never anticipated. The VCT program and BGSU were important to both of us ending up where we are today."