Reunited: Alumni of '73, '63 excited to see old friends at Homecoming

Class of '63 and '73 commemorate Homecoming

Reconnecting with old friends is a highlight during any BGSU Homecoming, but doing so this year was especially significant for graduates of the Classes of 1963 and 1973. Alumni of those years were invited to celebrate their 50th and 40th Reunion year during special events held Homecoming Weekend, Friday October 4 and Saturday October 5. They commemorated the weekend with presentations of class gifts in support of the Alumni Laureate Scholars program. The Class of 1963 raised $157,485 and The Class of 1973 raised $453,490.

Two BGSU alumni reflected recently on their reunion milestones, the friendships they hoped to reignite during Homecoming 2013, and the important role their BGSU education played in their careers.

Learning is truly a lifelong pursuit for Michael Kendall Williams '73, of Tualatin, Ore. When he greeted his former classmates at his 40th Reunion during Homecoming 2013, Williams had tales of how his BGSU experience prepared him for not one, but two, successful careers in law and international public health.

After the attorney retired at age 56 as managing counsel for the U.S. Treasury Department, which meant serving as head of all major litigation in the western United States, Williams continued his education. He is working on his doctorate in global public health at the University of Washington, and has already earned a Master of Global Public Health degree and completed an internship in support of clinical trials in South Africa. After graduating summa cum laude from the Oregon Health and Science University, Williams spent the summer of 2010 with the Desmond Tutu HIV Foundation. He helped conduct HIV testing at a mobile clinic, assisted with clinical trials of treatments for tuberculosis and malaria, and conducted legal research for the trials.

"My great love is Africa," Williams said. "I'm only retired in the sense that I don't get paid."

The HIV rate was the majority of the population where Williams interned, and he has witnessed the resilience of parents who daily walk five miles for water while managing their illness and the fluctuating health of their children.

Williams has nurtured an interest in international affairs since his days at BGSU. Though he struggled to decide between a career in law or medicine as a first-year student, his interest in global matters was fueled by the conversations and events on the Bowling Green campus after members of the Ohio National Guard killed four Kent State students during a protest of the Vietnam War in 1970. The campus became a center for political debate, active citizenship, and global awareness.

"I was impressed that Bowling Green did not shut down," Williams said, recalling that most other universities cancelled classes following the violence. "Bowling Green was not a hot center for protest up until this happened. But there was a candlelight vigil, and thousands of students attended. Even the more conservative sororities and fraternities participated. Shutting down the University wasn't going to help matters much."

Now, he's thrilled to have served on the 40th Reunion Planning Committee. He even recruited a college pal - Deborah "Corky" Miller-Strong '73, one of the first student operators of the former BGSU Fact Line and "knew everything" as a result, Williams said - to join the fun.

Williams encouraged his classmates to attend the 40th Reunion, and regretted that there was at least one classmate that couldn't attend. His little brother in his fraternity, Sigma Phi Epsilon, died recently after struggling with Lou Gehrig's disease, amyotrophic lateral sclerosis.

"You don't get a second opportunity to do this, as far as people reconnecting at our age," Williams said. "You have to realize which relationships were the most important to you. We have to take advantage of that, because I don't know anybody at Bowling Green that didn't love or want to be there. It was a great atmosphere, and the people were tremendous." 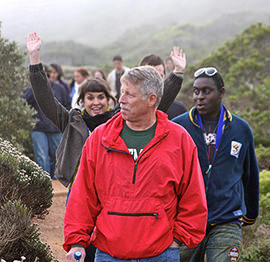 Bob Bahna '63 of Lindenhurst, Ill. also recently retired, but as marketing regional manager of corporate accounts for Baxter Laboratories in greater Chicago. He spent most of his working life in sales with Kimberly-Clark Corporation, though he temporarily diverged early in his career as a stock broker for Merrill Lynch.

He chose to join the Class of 1963 50th Reunion committee because his recent retirement afforded him more time to do so, and because he treasures his experience at BGSU as a student-athlete for Falcon Baseball. He looked forward to seeing several of his teammates at the event including Glenn Honeycutt '63, '66, of Huntsville, Ohio, and Lyle Bell '64, '68 of Littleton, Colo. The nostalgia of helping to plan the 50th Reunion also inspired him to reconnect with his Falcon Baseball coach, Dick Young '75. Young rose to become BGSU Athletics Director before he retired.

Bahna earned the first baseball scholarship ever offered at BGSU and was a standout pitcher who still holds two all-time school records: for most innings pitched (14.1) and most strikeouts in the Mid-American Conference (20,) both records that were set during a 1961 game against Toledo. Though the game ultimately was a loss for BG, Bahna still has great memories of it and his student experience at BGSU.

"My best friend was pitching for Toledo. It was nothing to nothing going into the 15th inning, and I made an error that cost us the game," Bahna recalled. "My dad went nuts."

Bahna and his wife, Linda, have also coped with difficult memories: both survived the 1989 plane crash of United Flight 811. They were just about 15 minutes into the flight bound for New Zealand from Hawaii when a cargo door swung open, creating a cabin pressure change that caused nine passengers to be ejected from the aircraft at 22,000 feet. Bahna and his wife were seated in the row directly behind those who perished. Somehow, the pilot managed to turn the plane around and land safely, though aviation experts have marveled because "no one has ever landed a plane with a hole inside of it," Bahna said.

"Everyone in front of us died," Bahna said. "I keep saying the Lord saved me for some reason and I'm still trying to figure that out."

"We made a lot of great friends after that," Bahna said. "The pilot was a miraculous guy, and the stewardesses were great. We met a great couple that sat across from us who we are now really good friends with. We got a lot of positive out of it."

The experience reminded Bahna that "life is short," which is another reason that he worked to reconnect with his classmates from BGSU.