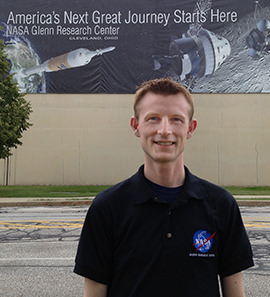 First, let me start off by saying I am honored to have gotten to work at one of the coolest places ever, the NASA Glenn Research Center in Cleveland. NASA was named one of the top 10 best places for internships by Forbes Magazine.

It has been a passion, goal and dream of mine to work for NASA since I was very young. My experiences with BGSU have helped to make this dream a reality. The selection process was very competitive and I would not have been as successful if it weren't for the Honor Society I joined and the help and support of my advisor, Rachelle Hippler.

At Glenn Research Center I was a software engineering intern under the Space Communication and Navigation (SCaN) summer internship program. This program handles all of NASA's space communication activities from satellites in deep space to the ground stations on Earth.

I was one of 10 interns from all over the U.S. I worked directly with two other interns as part of a Portal Development Team. A portal is basically an enterprise website primarily on an organization's intranet. My job was to develop enterprise tools in Java using Liferay portal technology.

I worked under two extraordinary mentors and had the help and support of employees in the development team. I also had the privilege of working with two incredible BG alumni. Everyone I worked with was incredibly accommodating and supportive.

Part of working for NASA was to participate in NASA's outreach programs. NASA Glenn is a staple of Cleveland's community and our team was invited to attend a ribbon cutting ceremony for the new Cleveland Convention Center downtown. We staffed the Science on a Sphere exhibit, which is an enormous globe showing the capabilities of different satellites and their technology. We attended the televised ribbon cutting ceremony and met the mayor of Cleveland, Frank Jackson and Senator Sherrod Brown. I also had the honor and privilege of meeting astronauts Stephanie Wilson and Shane Kimbrough during my stay with NASA Glenn.

Not only did I get to meet a lot of brilliant and inspiring people, but everywhere you turn is something remarkable. Directly outside my office was a Gemini capsule and I was able to hop in a Mercury capsule, both from before the Apollo missions.

I took the opportunity to attend many lectures, both at Glenn and a Space X conference at the Ohio Aerospace Institute, to learn as much as possible. I was able to take several tours of the many facilities throughout the 350-acre center. I also had the opportunity to view a live stream from the International Space Station. Needless to say, I witnessed and learned a lot of amazing things.

Working at NASA Glenn this past summer has not only developed me professionally, but I have learned more about myself as a person and what I want to do with my career. Aeronautics and space is an exciting and difficult field, but it is something I am determined and prepared to strive towards. I have made many contacts and made some lifelong friends with my fellow interns. I hope everyone has the chance to experience working in a career they are passionate about and be as excited as I was to go to work every day.