From couch surfing to riding waves on 'Deadliest Catch' 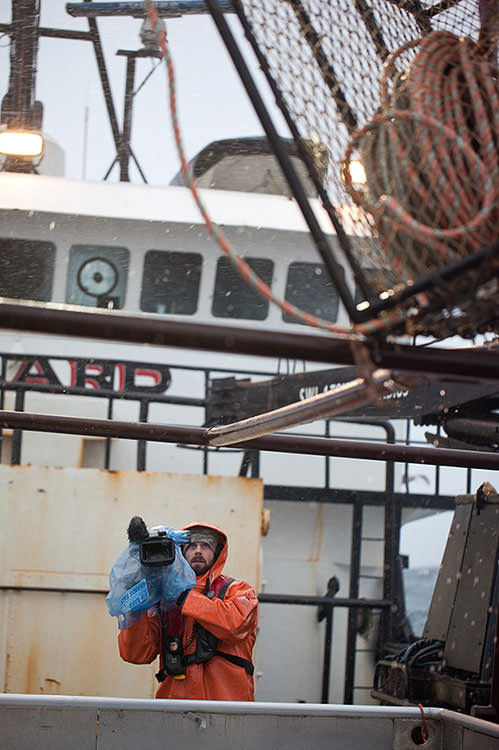 BGSU alumnus Brad Carper '03 experiences the great outdoors from the perspectives of real people in one of the world's most extreme cold climates - northern Alaska - for his work on various documentary and reality television programs like the Discovery Channel's "Deadliest Catch."

But it wasn't easy to land gigs behind the camera on programs like Animal Planet's "Whale Wars," History Channel's "Ax Men," and Discovery's "Bering Sea Gold." It took persistence, support from family and other BGSU alumni, and the sort of practical TV experience that Carper started earning when he was still a telecommunications major at BGSU.

"BGSU may be this little state school in the middle of Ohio's cornfields," Carper said, "but there are lots of golden opportunities there."

As a freelance cinematographer and producer, Carper credits his BGSU education for preparing him to compete and succeed in Hollywood.

Carper picked up the basics of TV production during hands-on courses taught by BGSU faculty like Jose Cardenas and Drs. Tom Mascaro and Peter Shields. Sophomore year, he honed his camera and editing skills as a student employee at WBGU, the PBS affiliate on campus that hires and trains dozens of students every year.

"I just looked up to Jeff," Carper said. His success "is what really motivated me to go out to LA."

Carper graduated with enough cash saved for his trek to California but too little for the high cost of rent in Tinsel Town. That meant couch surfing with Bowling Green friends who had already established themselves in the television trade.

"If you want something bad enough, you can obtain it, but sometimes you have to put yourself in uncomfortable situations to do it," Carper said. "You have to get out of your comfort zone."

Sometimes getting out of your comfort zone means reassessing your personal goals. After working about four years in LA, Carper took a sales job with a high-end video equipment rental firm. Because the punishing pace of Hollywood requires most to compete constantly for their next gig, taking more than a year out of broadcast would be the kiss of death for some TV careers. Not for Carper's.

Instead, the sales gig helped him recognize his enduring commitment to the TV business. Carper used the opportunity to further educate himself on the business end of TV, purchase discounted gear, and network with clients. One of those clients was the supervising producer for Discovery's "Deadliest Catch." Knowing her paid off later, when she tipped him off to a job opening for a shooter-producer on a U.S. Coast Guard's helicopter search and rescue operation in frigid northern Alaska. The opportunity allowed Carper to prove himself, and led to work on "Deadliest Catch."

"When a high-level decision maker told me to stay in touch with her, I stayed on her radar all right," Carper said. "Every month I would call her, 'Just checking in.' " 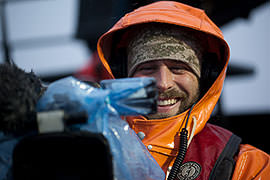 Eighteen months later, Carper was punching through freezing, 30-foot ocean swells on the deck of a crab fishing boat wielding a video camera in the middle of the Bering Sea for "Deadliest Catch." Contributing to the show as a photographer and producer was the epitome of his career, he said, despite being physically worn down by four-hour naps every 20 hours and being assaulted by a boat captain.

In Season 7, Episode 16 "I Smell a Nightmare," Captain Keith Coburn of the Wizard confronted Carper on camera. Coburn accused Carper of failing to replenish the coffee, before grabbing him by his raincoat, forcing Carper down the hall and slamming him against one of the ship's steel hatch doorways. The captain later apologized, and the two finished up an awkward few more days of filming.

Since leaving "Deadliest Catch," Carper continues to gravitate toward outdoorsy television producing gigs that showcase risk-taking folks in their daily lives. He is currently producing National Geographic's "Life Below Zero," about modern homesteaders surviving in the world's longest and darkest subzero winter in northern Alaska.

"At this point in my career, its really important to me to be selective with the jobs I take," Carper said. "At the end of the day, it's just about having a passion to do what you love and to do it the best you possibly can. And if you can do that, the opportunities will be endless."