Ellen's Edventures: A pursuit of happiness 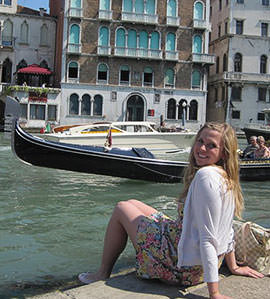 Growing up in a family of teachers and farmers, it only seemed natural that Ellen Dotson follow in those footsteps and major in education when she started at Bowling Green State University. She was only a few courses shy of graduating with a teaching degree when a campus tragedy inspired her to take a different path.

After a tragic car accident, which resulted in the death of three BGSU students in March 2012, Dotson said she was reminded that life is too short not to pursue what is going to make you most happy.

When she read the obituary of Rebekah Blakkolb, a tourism, leisure and event planning (TLEP) major who reminded her much of herself, Dotson was inspired to make changes in her life. Within just two weeks of the girls' passing, Dotson made a big decision about her future. She changed her major to TLEP.

"In Rebekah's obituary, it talked about her interests in both college and high school," Dotson said. "We were a lot alike and both religious. Even though I never had a chance to meet her, I felt the need to change my major. I thought I wanted to be a teacher, but I realized that I have always had a passion for organizing and traveling."

Dotson had the opportunity to meet Blakkolb's family a year later at the College's Scholarship Convocation, where she received a scholarship given in Blakkolb's honor. The TLEP Memorial Book Award recognizes an outstanding student chosen by department faculty.

According to Dotson, the change in major would come to be one of the best decisions in her life. She has been able to combine her love for traveling, learning and coordinating to prepare for a career as a TLEP professor or corporate event planner.

Dotson's appreciation for travel was sparked from a semester abroad at Keele University in England her sophomore year. There, she spent time in Germany, France, Spain, Italy, Greece, Wales, Belgium, Austria, the Netherlands, and Scotland.

"In my classes, I was able to understand customs and traditions much better due to my experiences, and the trip as a whole really shaped my honor's capstone project."

The projected titled, "Ellen's Edventures: Start your Journey: Africa's Big 5," comprised of a travel plan appealing to adventurous middle-upper-class and upper-class couples with a household income of $80,000. This trip consisted of off-the-beaten path countries in Africa, as well as a few of the major tourist destinations.

"My touring plan consists of geography and information in order to give the target audience the best possible experience," she said. "The point is to give participants a history of the country in a real-world way. By starting participants in popular areas, providing tours and giving suggestions, yet still allowing time to explore, Ellen's Edventures hopes to enlighten those interested in travel."

Dotson believes that traveling with an open mind in search of nothing more than an adventure will lead to some of the most rewarding experiences. Her semester abroad not only taught her how to be independent, but she learned a lot about who she was and who she wanted to be. She built lasting relationships with fellow students whom she visited in England in May.

Her time across the pond, coupled with her experience as a camp counselor with 4-H Camp Kelleys and the BGSU Recreation Center, has developed skills applicable to Dotson's career aspirations.

In her capstone project, Dotson referenced a quote by Saint Augustine, "The world is a book, and those who do not travel read only one page."

Dotson is about to wrap up one chapter of her life, but looks forward to living out the next chapters of Ellen's Edventures when she graduates August 10.