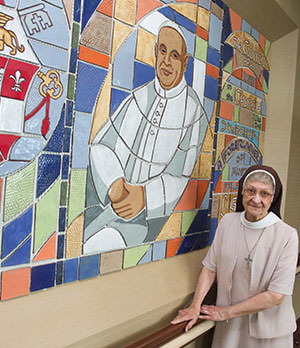 Artists often have faith in coming up with unique ideas for their next sculpture or painting. But one artist and BGSU alumna combines her faith in God with her love of art.

Sister Jane Mary Sorosiak, 83, is a Sister of St. Francis who received her master's degree in art at Bowling Green State University in the 1960s. Today, she weaves together art and faith to further her ministry by creating beautiful and inspiring ceramic murals for churches and other buildings.

Some artists might start out with a small project. Not Sorosiak. The first mural she crafted is located at the Franciscan Center at Lourdes University, and extends around the entire building. It features a figure of Christ that is 40 feet high. His head alone is 5 feet tall.

It was a huge project that she and two other sisters didn't mind taking on.

But little did she know that this first mural in 1983 was to be the start of something bigger. After the dedication of the Franciscan Center, Sorosiak was asked to create a ceramic mural for St. Elias Orthodox Church in Sylvania. The (Toledo) Blade photographed Sorosiak at the blessing of the mural and ran a story about the project, and churches across the country have been calling ever since.

"The interesting part of it is that I never solicit anything," she said. "The jobs just kind of keep coming."

Sorosiak takes great pride in what she does and makes sure that each piece she creates has special meaning.

"If they have some specific ideas, I try and work with that. And if they don't, then they leave it up to me," she said. "The thing is, I have to satisfy myself, and I want them to be happy because they're going to be with it."

Each mural begins in Sorosiak's studio, where she spends many days and long hours designing them. The process starts with her sketch of what it will look like. After figuring out what colors to use, she then has to cut, paint and fire the dozens of ceramic plates. But that process isn't always easy. Sometimes a piece or two will break or crack and she has to either fix them or start over. Each plate is then numbered on the back, corresponding with a large sheet of paper so that the mural easy to put together upon arrival. 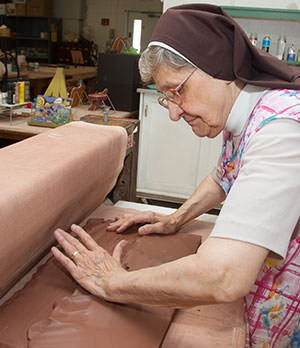 Once the pieces are finished, they're tightly packed and shipped to where they need to go. Sorosiak then travels to the location for the mural's final installation.

Her most recent out-of-state trip was to Bryan, Texas, in June, where she was commissioned to design two murals for St. Joseph Hospital. One of them features St. Francis with several animals and the other is of Our Lady of Guadalupe.

Those murals are among the many across the country that she has created. Sorosiak doesn't know how many murals she has designed over the years, but estimates that there are hundreds. Most of them are here in northwest Ohio, where she was born and raised.

You could say it was Sorosiak's calling not only to become a nun, but also to become an artist. She credits the Franciscan sisters who taught her in elementary school. Sorosiak recalls one of the first drawings she created in the second grade at the former St. Hedwig's Elementary in Toledo. She vividly remembers her teacher allowing her to draw pictures on some wallpaper in the cloakroom.

"I did a whole drawing of children at play in the park, and then the children would color it," she said. "In the second grade - isn't that amazing! I'm very grateful for all of those early teachers I had."

Sorosiak received her bachelor's degree from Mary Manse College and a master's degree in English at Xavier College. She then went on to Cardinal Stritch High school in Oregon, Ohio, where she taught art for 14 years. She began working on her master's degree in art from Bowling Green State University while teaching there.

The direction of her art was set at the University.

"For my thesis, I did a mural too. It seems as if I was destined to do murals. Before any of this started I was doing murals," she said.

Sorosiak has fond memories about the students, staff and her studies at BGSU.

"I really enjoyed all my years at Bowling Green," she said.

During that time, she wore the traditional nun's habit, and she remembers how pleasant everyone was to her. She recalled a particular student who took the time to show her how to stretch canvas.

"I was ashamed to tell the professor I never stretched canvas before and this young student was coming up the steps; he had ragged shorts on, and was kind of hippie looking. I said, 'Do you know how to stretch a canvas?' He said, 'Sure, come on, I'll show you!' It was that kind of experience with the students and professors there," she said.

Sorosiak went on to become an accomplished teacher and artist. Although she is retired from teaching, she continues her mission of creating her ceramic murals.

"I've been doing the same thing for 30 years now. And the only thing now is that I get tired faster. I hope to keep on going until I can't do it anymore physically."