The little team that could

In 2005, a northwest Ohio high school baseball team finished the season with a 6-17 record. The team from Gibsonburg shook off its losing record and won the state championship against all odds. The story of these unlikely champions is the heart of alumnus Bob Mahaffey's film "Gibsonburg." 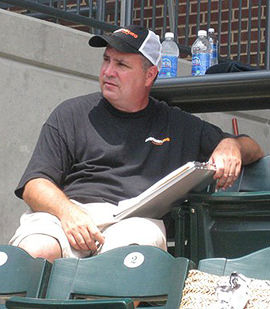 "At one point they lost 13 games in a row," Mahaffey explained. "The last game of the year they lost 17-0. Not one of these kids went on to play college ball. I had never heard of a bigger underdog story and felt it would make a great book and a great movie."

Mahaffey, who graduated from Bowling Green State University in 1984 with a degree in business, was always familiar with the story, but got the details from his niece's husband during a family gathering in 2010.

He finished his book about the team in January 2011 and soon after adapted it for a screenplay. While he'd always wanted to make a movie, this was his first attempt at making it a reality.

"I think everyone thought I was nuts. I met some people from Gibsonburg and they said, 'Bob, you've never made a movie. What makes you think you can do a successful feature length film?' But I said, 'You won the state championship with a 6-17 record.' I wasn't sure I could do it, either, but once I saw the footage I realized we could do something special and I think we have."

Mahaffey says dozens of college students "came out of the woodwork" when they learned about the movie and filled most of the acting roles, served as the film's crew and even handled catering.

"It's long hours, it's exhausting. We didn't pay these kids, they were interns, but they're sharing in the profits if it's profitable and using it as a springboard to other things."

One of those students was Ryan Keller, a junior majoring in visual communication technology. He heard about the film through his father and immediately contacted Mahaffey to get on the crew.

"The summer we shot the film was the best summer of my life," Keller said. "I've never worked with such easygoing and fun people before. I learned so much about making films and the importance of producing quality video work. It's a cherished experience that I wouldn't trade for anything."

Mahaffey comes from a Falcon family. His father and grandparents are alumni and his aunt is Ginger Kathrens, a noted filmmaker and one of BGSU's 100 Most Prominent Alumni.

"To increase our probability of success I had some key people come in and help a bit," Mahaffey said. "We had these college kids who are so talented, and these people served as mentors. She was in at the beginning to give us guidance and support."

When editing wrapped at the end of 2011, Mahaffey submitted the film to several festivals, including the Dances with Films festival in Hollywood, which features works by unknown filmmakers. "Gibsonburg" was one of the 21 films chosen for screening out of 1,500 submissions. The film premiered at the festival in June 2012 and led to the ultimate goal for all filmmakers -a distribution deal.

"We are all proud of what we accomplished," said Mahaffey. "Everything else is icing on the cake."

The film is currently playing in theaters across Ohio and will be available on DVD later this year.