From biology to baseball 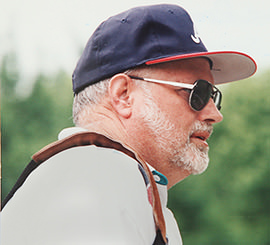 Biologist Dr. Robert Romans was known as one of the University's most effective and beloved faculty members, so much so that in 1986 students chose him as recipient of the Master Teacher Award, considered BGSU's highest honor for teaching. Romans retired in 1994, and passed away May 11, 2007.

Not only did he leave a legacy of learning among his students, his memory lives on at BGSU in other, less expected, ways that go beyond biology.

Romans was an avid collector. This year, his wife, Jean, donated his collection of over 40,000 baseball cards, appraised at approximately $22,500, to BGSU's internationally known Browne Popular Culture Library.

"Our son Brad got his degree in pop culture, and he gave me the idea of donating the cards," Jean said.

"Anything I can do for the University, I will do.'"

Brad Romans connected his mother with Nancy Down, head of the popular culture library.

"We love collections like this," Down said. "It reflects collecting at its best — showcasing someone's interest in a team or subject. Dr. Romans kept the collection of cards very organized, sorting them in binders by teams, players and years."

"Anything I can do for the University, I will do."The collection includes cards representing many teams, but the majority are from the Braves.

She said she believes giving her husband's prized possessions to BGSU is the logical thing to do.

"I know the collections will be taken care of, and I can trust them."

While baseball aficionados owe a debt of gratitude to the late associate professor emeritus of biology, so do thirsty people in the Life Sciences Building.

In 1969, Romans was hired as an assistant professor in the Department of Biological Sciences. He was promoted six years later and served as an associate professor in that same department for an additional 19 years. Each fall, during the first staff meeting, Romans was known to ask when they would be getting a pop machine for the lobby of the Life Sciences Building.

In 1993, Dr. Ronny Woodruff, Distinguished Research Professor in biology, assumed the role of chairman for the biology department. After the first fall staff meeting, Romans once again asked for a pop machine for the building. This time, however, Romans was asked to follow Woodruff to the lobby, where he found a large structure covered by a sheet.

"We have great memories of our time at BGSU, and we are very supportive of it""Bob was asked to remove the sheet, and when he did, he was greeted by the building's first pop machine. He was given 50 cents, and with that, he bought the first can of pop from that machine," Jean recalled. "They even put a plaque above the machine that bears his name."

Romans loved teaching, and Jean laughed as she recalled the story from one Halloween.

"Bob was teaching Biology 104 in Room 220. Sometime mid-lecture, the back door of the lecture hall opened, and three men came in dressed in casual clothes, with carved jack-o-lanterns on their head. None of the 250 students attending the class knew who they were as they carried Bob out of the classroom. They had so much fun."

Married for 43 years, he and Jean met in the 4-H Club in northern Wisconsin.

"We were married a year out of high school," Jean recalled. "Bob worked on pipeline construction, and enrolled in the University of Wisconsin Superior because he wanted to teach. He received his degree, and was offered a job at BGSU in 1969.

"We planned to stay in Bowling Green for three years," she said. But they ended up loving the University and the town and stayed there until a few years before Bob's death, when they moved back up to northern Wisconsin. Their son Brad still lives in the Bowling Green area.

"We have great memories of our time at BGSU, and we are very supportive of it," Jean said.