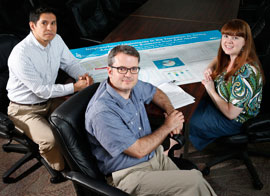 Three faculty members in the Department of Sociology will be digging deeper into the issue of neighborhood change and violence in adolescence and early adulthood thanks to a $417,000 grant from the Eunice Kennedy Shriver National Institute of Child Health and Human Development.

The team, made up of Drs. Ray Swisher, Danielle Kuhl and Jorge Chavez, will spend the next three years researching the topic with the help of a graduate student as well as undergraduates.

The project integrates two major approaches to the study of crime and violence. "One of these is the life course perspective," Swisher explained. "This perspective looks at how an individual's involvement in crime changes over time, from adolescence to adulthood, and tries to identify factors that lead to what is called desistance - someone who starts out involved with crime, but then stops as they take on adult roles such as a stable marriage, having kids, getting a good job, or moving. It's these changes in adulthood that may lead to 'turning points' in the life course away from engagement in violence."

Recognizing that good jobs and other opportunities are not evenly distributed geographically, Swisher said the project will also focus on neighborhood poverty and changes in neighborhoods across the life course.

"Crime tends to be concentrated in disadvantaged neighborhoods," he said. "We will bring these two approaches together to see how people who are living in poor neighborhoods change as they move into adulthood. Do they go to college? Get married? Get a different job and move to a better neighborhood? How does that change in neighborhood affect their involvement in violence?"

The study will utilize a national sample that began following individuals at about ages 12-17 and has continued with follow-ups into their late 20s.

It's a topic that Swisher and his colleagues have already begun studying. The newest edition of Social Forces, one of the top sociology journals, features one of their papers, which looked at inequalities in neighborhood poverty from adolescence to young adulthood across racial and ethnic subgroups. Swisher said this grant will help them build on that research.