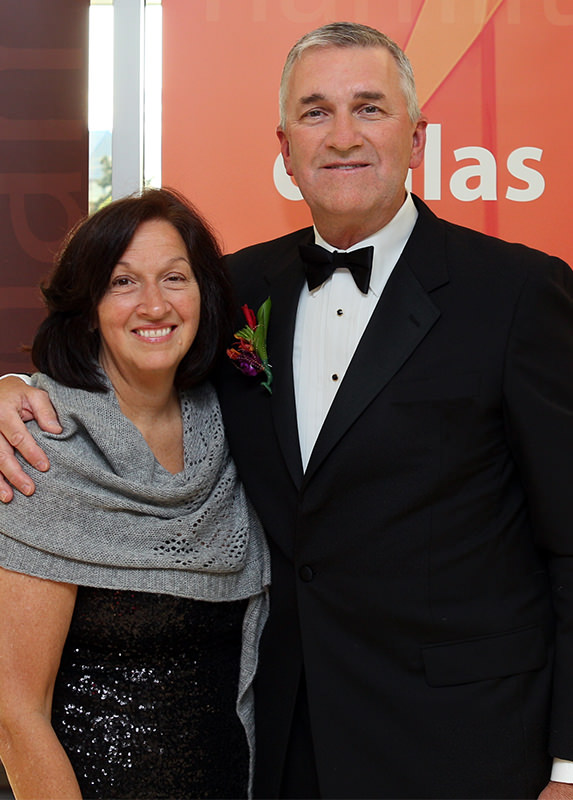 Students will have new opportunities to earn four-year scholarships in the Alumni Laureate Scholars program, thanks to the generosity of Paul and Margo Hooker.

Falcon Flames Paul ’75 and Margo ’74 of Sea Girt, N.J., have pledged $160,000 to Bowling Green State University. They will invest in scholarships, they said, because they appreciate the value of their BGSU education, which helped to prepare them to purchase and successfully expand their linen business, SFERRA, into a multi-million dollar enterprise.

It is important to the Hooker family to lessen the financial burden of students who, like them, might otherwise work their way through college. Margo actually gave up a scholarship at another institution when she transferred to BGSU, and Paul's family could only partially fund his education.

"We just realize that it's so important for people to have access to (scholarship) help, because college is a huge (investment) for both the parents and the student," Margo said. "We're thrilled to be in the position to be able to do it and give back to Bowling Green."

The generosity of the Hooker family will initially support one student with full tuition for four years. Over time, they plan to expand their investment to support as many as four students. The Alumni Laureate Scholarship program involves close mentorship of each recipient, and requires students to maintain high GPAs, to volunteer in the community, and to become leaders on campus.

"We happened to go there for different reasons, but it served us very well," Paul said. "We're just happy to be able to share God's gifts."

The volunteer and service aspect of the Alumni Laureate Scholarship program was also important, Paul said. Paul and Margo are also active volunteers in their community, having established Challenged Youth Sport, www.cysp.org, a nonprofit that offers team sport and recreational opportunities to children and teens with special needs or disabilities.

Their professional success began when Paul was working as a sales representative and she an elementary school teacher when his brother-in-law suggested they partner in purchasing a small distributor of fine Italian linens. When they bought SFERRA in 1977, the business was netting about $250,000 in annual sales.

Fast forward 35 years. SFERRA boasts annual sales of more than $30 million. Its high-end napkins, tablecloths and bedding are known to be a favorite of celebrity homemaker Martha Stewart, who invited Paul onto her cable television show in 2011.

But the most important part of their lives began when they met at BGSU, they said.

"We're thrilled to be in the position to be able to do it and give back to Bowling Green."They came from similar backgrounds, with both having lost a parent at an early age and working their way through college. Paul was just 7 years old when his mother died, leaving his father, a railroad worker, to raise the brood of five in the rural town of Orrville, Ohio. Margo was 10 years old when her father passed, leaving her mother to raise six children in Loch Arbour, N.J.

Paul attended BGSU because he was looking for a state college with affordable tuition. Margo transferred with three of her best friends to BGSU, where one of their boyfriends attended, because BGSU offered student life and athletic events that were lacking from their all-female private college in New Jersey. It was worth it to give up a scholarship to transfer, she said, and quickly made friends with nearly everyone in her dorm and became involved with St. Thomas More Catholic Church near campus.

"The first thing we saw was the stadium and the basketball arena. And everyone was so nice," Margo recalled of BGSU. "We couldn't look anywhere else."

"I was crazy about her from the minute I saw her," Paul said.

She was due to earn her bachelor's degree in elementary education a year before Paul would finish his degree in business administration, so Paul didn't wait long to propose marriage. They married in August before his senior year.

Margo worked for a year at an elementary school in Haskins until Paul finished and found a corporate job in sales in Jacksonville, Fla. They never planned to purchase a business, he said.

"I was just happy to graduate and be married," Paul said.

Regardless, they decided to partner with Paul's brother-in-law to buy the venture in New York City. The previous owners of SFERRA were struggling, as the textile workforce in Italy was waning. A major boon for the business was Paul's visit to Vietnam nearly 20 years ago, in which he found new small businesses to partner with for embroidery services. Today, his best hand embroidery craftspeople are there, embellishing the world's finest Italian fabrics.

"If you have that entrepreneurial spirit, try something different. Don't be afraid to give it a shot. You're young. The saying goes if you do something you love, you'll never have to work a day in your life. The key is to monetize your passion."Paul and Margo have three children. When the children were young, Margo was a stay-at-home mom and part-time bookkeeper for the business. She calls Paul "the face of SFERRA."

Professional success is the result of trial and error, and consistent efforts to become the best, Paul said.

"My passion, I found out later, was just an entrepreneurial bent," Paul said. "If this was a company that makes screw drivers, they would be the best in the world. I had no affinity for this product as I didn't grow up in a culture of having fine linens. Even today, we don't entertain lavishly. It's provided a living for my family and me."

When Paul is hiring for SFERRA, he recognizes the best candidates as those who stand out for taking a risk or alternative path professionally. He welcomes those with service in AmeriCorps or Peace Corps, for example, because "it screams to their individualism," Paul said.

He suggests that BGSU students "look at alternative paths" as well.

"There are 20 million people looking for jobs, and we're only creating a couple hundred thousand jobs a quarter," he said. "We have to be more innovative. If you have that entrepreneurial spirit, try something different. Don't be afraid to give it a shot. You're young. The saying goes if you do something you love, you'll never have to work a day in your life. The key is to monetize your passion."