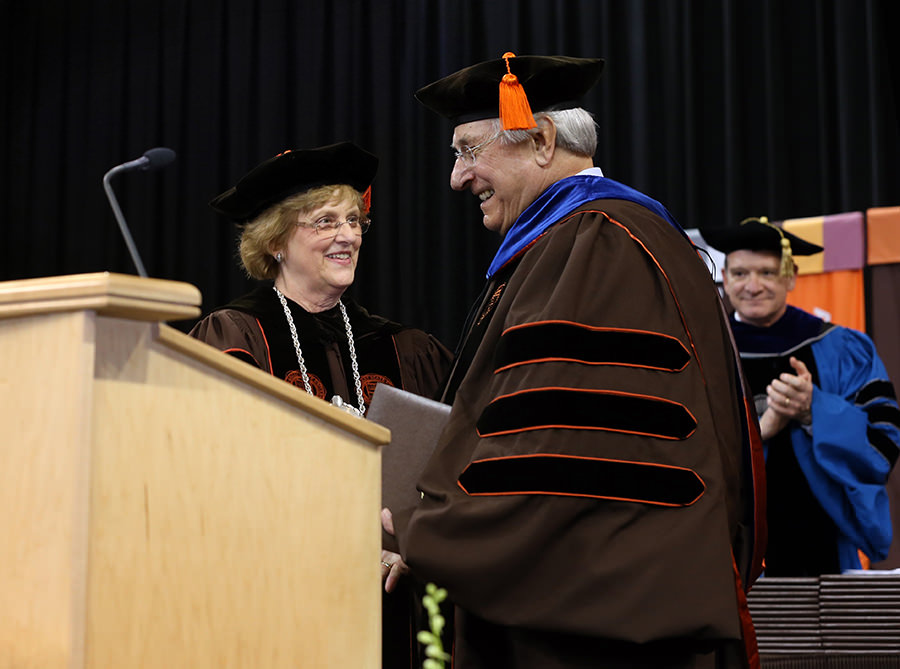 Philanthropist Bob Sebo '58 of Salem, Ohio was surprised and thrilled to be recognized with an honorary doctorate, the highest honor bestowed by the University, during commencement exercises in May.

Sebo is known to be one of BGSU's most generous supporters, investing more than $5 million in BGSU to educate students through athletic and music scholarships, enhance sport with a lead gift to build the Sebo Athletic Center, and foster local business development with more than the 10 years of the Sebo Series in Entrepreneurship lectures. He concluded a nine-year term on the BGSU Board of Trustees in 2011.

His education in business, for which he paid just $165 in tuition each semester, proved invaluable.

"I am a very loyal person to anything that has been significant to me," he said. "Bowling Green gave me some great opportunities and I was able to learn a lot just above and beyond the world of academia."

Sebo credits BGSU for helping to prepare him for a leadership role at then-startup payroll accounting firm, Paychex. The company focuses on mid-size and small businesses, and now serves about 560,000 clients. The company enjoyed a "storybook rise," Sebo said, growing quickly to become the second largest payroll service in the nation. When Sebo retired as senior vice president of Paychex, dozens of managers and administrators he had hired and mentored were enjoying Paychex's success as millionaires. He was inducted into the Dallas Hamilton Entrepreneur Hall of Fame at BGSU in 2008.

"Bowling Green gave me some great opportunities and I was able to learn a lot just above and beyond the world of academia.""I've always believed that the most important attribute of a leader or manager in a company was their attitude," Sebo said. "It is a frustration if you are working with and dealing with people who think negatively. My favorite line relative to that is, 'How do you expect to soar like an eagle if you hang around with a bunch of turkeys?'"

"Probably what I'm most proud of was that I was involved in providing a great service to a multitude of people in the business world," he added.

He continues to help others to achieve success. When seventh and eighth graders visit campus to learn more about managing money during the BGSU Falcon Millionaires program each summer, Sebo goes out of his way to spend time with them and answer their business questions.

Sebo said he remains loyal to the university that gave so much to him as a student, and enjoys any opportunity to interact directly with BGSU students.

"I think students are a heck of a lot smarter today than in my day," he said. "The education process is so much more advanced and I am incredibly impressed with the overall interest level and knowledge of a college student in business."

Sebo said he enjoyed the "surprise of a lifetime" when he learned he would receive the honor, and likes to joke with pals about his new nickname: "Dr. Bob."

"'Doctor' relates to me a very deep commitment to education, to study and working hard," Sebo said. "So from the academic standpoint, it knocked my socks off. Having a doctorate bestowed upon me never crossed my mind."