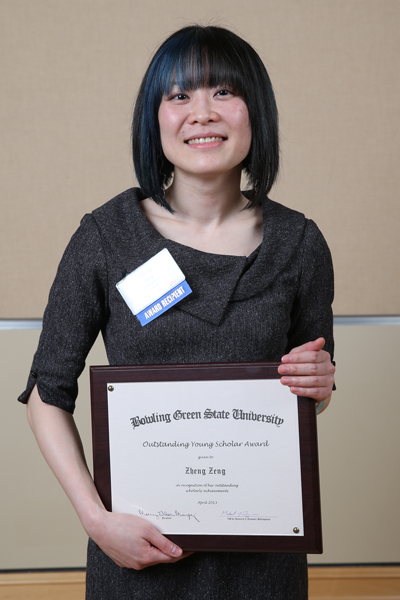 BOWLING GREEN, O.—In the four short years since receiving her Ph.D. from Southern Methodist University and joining the Bowling Green State University economics faculty, Dr. Zheng Zeng has already produced a significant body of work, with more in the pipeline. Her achievement and potential have been recognized with the Outstanding Young Scholar Award, given to enhance the academic career of junior faculty by providing discretionary funds for the support of future scholarly activities.

It brings a $1,000 credit to the recipient's discretionary research account, in addition to a $2,000 cash award. Zeng, an assistant professor of economics, was presented the honor by the Office of Sponsored Programs and Research April 10 at the Faculty Recognition Reception.

A specialist in macroeconomics, applied macroeconomics and time-series econometrics, Zeng has published two papers in prestigious journals and has two more under final review; a fifth, on credit markets, is near completion.

On the basis of that paper, she was accepted for a session at the 2012 American Economic Association (AEA) annual conference. “The conference is the most important for the profession, and the probability of having a paper accepted is very low; sessions are even more difficult to be accepted,” wrote Dr. Mary Ellen Benedict, Distinguished Teaching Professor and department chair. Not only was Zeng accepted, her paper and session were very well-received, Benedict reported.

Zeng is adept at combining fundamental economic models and empirical testing of those models, an unusual and rigorous approach, according to Dr. John Hoag, a professor and former chair of the economics department.

She “knows how to model theory and apply data to test her hypotheses,” Benedict said, adding that her work has already added to the economics literature.

In her current research, Zeng is taking on “difficult but important work” that will result in publications in good field journals, predicted Dr. Timothy Fuerst, a former BGSU Distinguished Research Professor who worked with Zeng when she came to the University.

She has demonstrated a penetrating intellect. Dr. Peter VanderHart, a professor and graduate director in economics, recalled that from the very beginning, Zeng “more than held her own” in meetings with him and Fuerst, carefully examining and questioning their work and seeking their input on her own.

She has shown an unusual ability to do independent work for one so recently out of graduate school and is also able to work effectively as part of a team, observed VanderHart.

“She is in the process of developing a strong network of young researchers with whom she exchanges ideas and writes,” Benedict said, adding that Zeng is raising the reputation of the department. Recently, several interviewees for a macroeconomics position at BGSU expressed a desire to work with her.

Students are also benefitting from her presence and give her high performance reviews, Benedict said. “Zeng is not only an excellent researcher, she has developed into an excellent teacher who has learned to use her research in the classroom.”