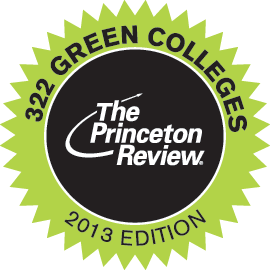 Bowling Green State University has special reason to celebrate Earth Day this year. The University will be included in The Princeton Review's "Guide to 322 Green Colleges," released on April 16. The publication comes as the University is in the midst of an array of Earth Week environmental activities, on campus and in partnership with city and county agencies and organizations.

"Bowling Green State University has established itself as a university sustainability leader with its top-to-bottom commitment to campus life, from employing a full-time sustainability officer to offering a host of environmentally centered student groups to encouraging students to pursue green jobs after graduation," the magazine states.

BGSU's selection is based upon its green rating, which was calculated by Princeton using data submitted to the guide during the 2011-12 academic year, and includes "Green Highlights" and "Green Facts."

"I'm proud of the work that's been done by our BGSU community toward making the University a good steward of the earth and of our resources," said Mazey. "Environmental awareness and the knowledge of how to put it into action is an important part of all citizens' education today, and we're happy to be recognized by Princeton for our commitment and achievements."

Achieving the Princeton green rating takes both a commitment on the part of the institution and dedication on the part of students, said Dr. Nicholas Hennessy, campus sustainability coordinator. It involves collaboration among multiple units, from Campus Operations and Capital Planning and Design to academic departments such as the Department of Environment and Sustainability and Construction Management. Student groups play a major role in supporting and implementing green efforts.

Putting academics into action was a strong factor in the green rating - "in particular, a sustainability internship program is offered jointly between Campus Operations and the Department of Environment and Sustainability, which offers opportunities for sustainability research in waste reduction, alternative energy, recycling, marketing/promotions, transportation, environmental education and other areas," according to the guide.

"Undergraduate majors and concentrations are offered in environmental policy and analysis, environmental science, or environmental health, and a special new minor in sustainability was added to the University's curriculum in 2011."

Brooke Mason, an alumna who completed a sustainability internship, is now the interim campus sustainability specialist for the University of Toledo, which has led to some friendly competition in a local version of the Campus Conservations Nationals - the Falcon/Rocket Energy Conservation Smackdown, Hennessy said.

"I'm proud of the work that's been done by our BGSU community toward making the University a good steward of the earth and of our resources"Mason's brother Lance Kruse, a sophomore majoring in math education, has picked up the banner and has been particularly involved in the Presidents' Climate Commitment movement. He helped with the feasibility study that preceded its signing and now, as an intern with Hennessy, he will be a member of the working group this summer focusing on implementation of two of the various action items BGSU committed to.

Kruse will get to put his math skills to use. "We'll be working on a greenhouse gas emissions inventory that gives an overview of the campus's real-life energy usage," he explained.

Transportation has gotten greener, thanks to campus partnerships. Students working with the Office of Campus Sustainability have been instrumental in putting the Orange Bike program into action, repairing and maintaining a fleet of bicycles for use around campus by those who register. BGSU installed three charging stations for electric vehicles, in collaboration with the city of Bowling Green and funded by Clean Fuels Ohio and the Student Green Initiatives Fund.

Princeton points out that many of the residence halls now have sustainability positions, and a student representative will sit on the Presidents' Climate Commitment committee. The guide was also impressed that the University's common reading experience in 2011 was "No Impact Man," which comprised a number of related activities and a visit from author Colin Beavan - during whose campus visit Kruse was "deputized' by Beavan to help spearhead the climate commitment movement.

BGSU now has three LEED-certified (Leadership in Energy and Environmental Design) buildings: The Wolfe Center for the Arts, the Stroh Center, and Carillon Place dining center. Other buildings, such as Falcon Heights and Centennial Hall, include environmentally conscious features. The Office of Design and Construction is working toward energy sustainability with older campus structures. Olscamp Hall was recently renovated employing "green" features, and the Student Recreation Center is slated for upgrades that incorporate energy efficiency and sustainable materials.

The Energy Conservation Measures (ECM) project at the center of a multimillion dollar lighting, heating and air conditioning project paid for in part with a grant from the Ohio Department of Development allows computer-based control of the lights and temperature in 28 campus buildings, reducing energy usage and costs.

And where there are no machines to handle the job, students step in. On some campuses Friday Night Lights means football, but at BGSU it's a dedicated team of student volunteers who take on the job of shutting off lights in places where it's not automatic. Friday Night Lights was begun by alumnus Dustin Sabo, and to date has saved the University well over $50,000.

Princeton also noted student leadership in initiating the Student Green Fund, an opt-out, $5 per semester fee that creates a pool of money for environmental initiatives on campus. A committee of students reviews applications for projects and makes funding decisions.

Among the many projects funded are human-powered cardio machines at the Student Recreation Center, recycled plastic bike racks, water bottle refilling stations and two electric vehicles. The fund also contributed to the "green roof" on The Oaks dining center.

As BGSU student sustainability leaders like Mason and Kruse graduate, they carry their knowledge and the cause into the wider world. Kruse plans to bring environmental issues into his eventual classroom teaching. "It's important to instill environmental awareness in all students," he said. "Even as a high school math teacher, I can use sustainability questions in math problems to make math applicable to the real world."

Being "green" is not just good environmental citizenship or responsible stewardship of the funds that support a state university, Hennessy pointed out. It also is a proven recruitment point, as a 2011 USA Today story related. Increasingly, college applicants say a school's commitment to environmentalism is one factor they take into account in making their college decision.

"We're really pleased to be included but we don't want to rest on our laurels," Hennessy said. "We want to keep getting better."