Walk a mile in someone else’s shoes, and maybe you’ll understand what their life is really like.

That’s just what Bowling Green State University students have been doing as part of the Parent Professional Partnership (PPP) course in the College of Education and Human Development. The class embeds parents of students with disabilities in the class and requires students to spend time with the family of a child with a disability.

The students and parent volunteers in Dr. Mariana Mereoiu’s intervention specialist class have been on a mutual voyage of discovery this year. Future teachers got a taste of the sometimes-overwhelming struggles faced by parents of children with disabilities such as autism, learning disabilities, cerebral palsy and hearing impairments. The parents learned that teachers really do care about their children.

Since the fall off 2006, this collaboration has shown that parents and teachers working together yield the greatest gains for all. And the state of Ohio is taking notice, which is why it has adopted the PPP course as a model. 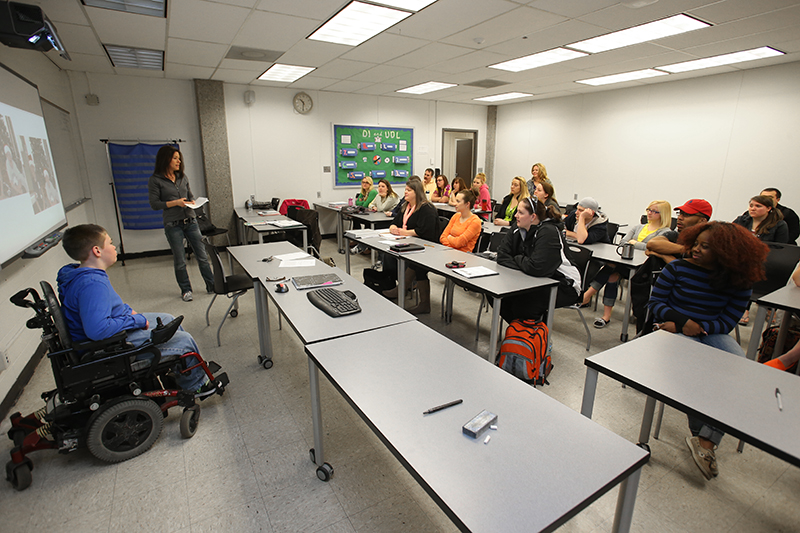 Mereoiu and Dr. Mary Murray, who founded the PPP class with school and community partners, helped the Ohio Department of Education’s (ODE) Office for Exceptional Childrenwrite a grant to implement the program throughout the state over the next five years. Beginning in the fall, Mereoiu, Murray and their team of parents and teachers will train teachers in 16 districts and four institutions of higher education to prepare implementers for the first PPP cohort, which will kick off in the 2014-2015 academic year.

“BGSU was the only university that we were aware of that has incorporated parents of students with disabilities into the learning process for new teachers,” said Jo Hannah Ward, assistant director of the ODE Office for Exceptional Children.

“We believe the concept is strong and the experience is valuable for both the student and the parent. It’s a win-win for each,” added Ward. “Once the parent and teacher are speaking a shared language and share common goals, we believe steps towards achievement will be gained. We feel the model BGSU has developed has data to support our thoughts towards this end.”

Murray and Mereoiu’s research shows that students and parents alike are learning together, practicing effective parent/professional partnerships and achieving empowerment.

“The qualitative and quantitative research shows that when the parents are in the class there are significant gains for students in beliefs, knowledge and skills compared with students that do not have parents in the class,” said Murray.

In response to these positive outcomes, BGSU’s College of Education and Human Development has partnered with agencies and school districts to pay the parents $50 per class to cover the cost of participation in the course. Because of reduced barriers to involvement, and because the class equips parents to be agents of change, the parents are empowered through the course to go back to their school districts or agencies and take on leadership roles.

“The class has been a very enjoyable one and in fact, I almost found it therapeutic at times,” said Patrick Haskett, a parent of a daughter with developmental delays. “One of the things we’ve seen in the classroom is the focus on communication and team-building skills, so I really think the next generation of special needs educators are going to get it right.” Haskett sees a renewed focus on collaboration to determine what students with disabilities need.

Mereoiu believes that the success of this class is due in part to the opportunity for students to exercise collaboration skills. “We don’t just talk about it, we actually pair them with parents so they can get to practice those skills, which are going to be crucial in their future careers.”

Whether a graduate student with life and professional experience or an undergraduate student preparing for a teaching career, students tend to be amazed by the things they learn from families.

“They start without having really any idea, or a good idea, what it means for a family to have a child with a disability – what the day-to-day looks like or the battles the families might have to fight,” Mereoiu explained. But both Mereoiu and Murray agree: “By the end of the semester, they really come out with a whole new understanding of what their role will be as teacher. It’s not just about the academic areas or things you will do by yourself as a professional, it’s about how you partner with a family member to help a student,” as Mereoiu summed up.

According to Murray and Mereoiu, BGSU students who took the class and are now teachers still go back and ask parents questions because they have stayed connected and view one another as resources. This lasting partnership may be attributed to students having walked in a parent’s shoes.