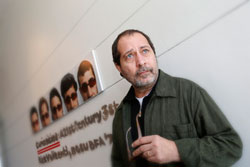 Rick Valicenti ’73 is a celebrated graphic designer who leads an award-winning design firm and is recognized by the White House for his lifetime contributions to his industry. But none of that matters much during the alumnus’s visits to BGSU, because his focus is building the confidence of students.

“Just trust your sensibilities,” Valicenti told budding artists in his recent master class. “I know it’s OK to feel self-doubt on some level, but just know how much can be done in an hour, and how much can be manifest in a couple hours.”

Valicenti has stayed connected to his alma mater throughout his distinguished career as an artist and founder of Thirst, a Chicago-based graphic design firm that creates art with function. Valicenti is a former president of the Society of Typographic Arts, a fellow of the AIGA/Chicago, and has received the highest honor in the graphic design industry: the AIGA Medal. He was also honored by the White House with the Smithsonian Cooper-Hewitt National Design Award for Communication Design.

He spent five days on campus in October working directly with graphic design students. He spoke during a public lecture, led a selective master class for senior students and young alumni, and involved students in the planning and installation of his gallery exhibition, “Curiosities:  Rick Valicenti + the 21st Century Thirst,” at the School of Art.

The on-campus exhibit demonstrated his wide-ranging design aesthetic from architectural-inspired angle or fonts, to abstract elements of human features or faces, to experimental graphic patterns that resemble doodles. Experimentation is a common theme when students ask about his design process. He guided master class students through a relevant game meant to spark experimentation, in which students designed a simple graphic to evoke a specific emotional response. One student designed a scratch-off lottery card with a positive message underneath, while another group offered fliers with a purple elephant that noted the influx of abandoned property in downtown Toledo. Valicenti gave the most points to designs that best evoked the intended response.

“You were able to take an issue or controversial topic and find form to it. If we approach design with a sense of what we want people to do, we can see the response that we want,” he explained to participants after the experiment.

Students frequently asked Valicenti how to overcome the challenges of finding the perfect design job during this difficult economic period. He encouraged students to broaden their expectations, and focus on finding an opportunity to be creative. He told them that he craved a creative outlet during his first two years after graduating from BGSU, when he worked as a steel worker in Pittsburgh. He photographed co-workers with old on-the-job injuries or deformities, and submitted the collection to gain acceptance to graduate school.

“I never imagined that I’d have the opportunity to be creative my whole life,” he said, adding later, “I don’t care if you design the top of cupcakes. Enjoy it.”

Recent art graduate Zach Kraner ’11 took a day away from his full-time job to enjoy a “creative boost” from Valicenti, he said.

Taylor Palumbo ’12 said much of Valicenti’s message resonated with her as a first-time job seeker, especially his advice to schedule informational interviews with experienced graphic designers.

“He said just to go out and ‘do it,’” Palumbo said. “From this whole experience, I’ve become really confident.”

Senior Ashley Lawson, who is president of the student chapter of AIGA, said she learned a lot from his exercise in artistic experimentation during the master class.

“His experimental style of work and probably just his general outlook,” she said. “That’s what I strive for.”