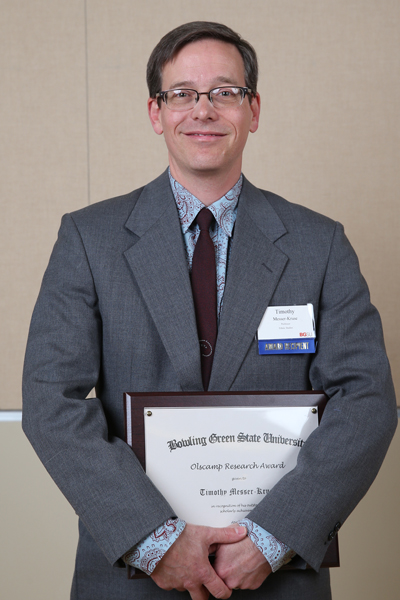 BOWLING GREEN, O.—Bowling Green State University’s Olscamp Research Award is based upon a faculty member’s outstanding scholarly or artistic achievements over the previous three years. For Dr. Timothy Messer-Kruse, those have been banner years in terms of professional accomplishment.

Messer-Kruse was presented the award at the University’s annual Faculty Recognition celebration April 10. Given by the Office of Sponsored Programs and Research, the Olscamp award comes with a $2,000 cash prize and a reserved parking space for a year.

“Dr. Messer-Kruse is an outstanding scholar who has been recognized nationally for his recent contributions to the field of labor history,” wrote his nominator, Dr. Sridevi Menon, an associate professor and interim chair of the ethnic studies department. She described his scholarship as “meticulously researched, richly detailed, and groundbreaking.”

A professor in the Department of Ethnic Studies, Messer-Kruse since 2011 has published two groundbreaking monographs, one edited collection, and several articles in prestigious journals such as Labor History and the Chronicle of Higher Education.

His most recent book, “The Haymarket Conspiracy: Transatlantic Anarchist Networks,” was published in 2012 by the University of Illinois Press as an imprint of its highly regarded “Working Class in America” series.

But it was his 2011 book, “The Trial of the Haymarket Anarchists: Terrorism and Justice in the Gilded Age,” published by Palgrave MacMillan, that thrust him into the public eye. It has been the subject of features in such prominent magazines and journals as The Atlantic, The Progressive, In These Times, The Chicago Tribune and recently in National Review. Over the past year, Messer-Kruse has appeared on numerous national radio programs including National Public Radio’s “Morning Edition,” “Talk of the Nation,” and “On the Media.”

“Choice magazine, the leading magazine of research libraries, recently named ‘The Trial of the Haymarket Anarchists’ an ‘Outstanding Title,’” Menon wrote. “Most significantly, in July of 2012, ‘The Trial of the Haymarket Twelve’ received critical attention in two leading journals in his field: Labor History named it the ‘Best Book’ published in labor history, and Labor: Studies in Working Class History of the Americas commissioned four prominent scholars to review Messer-Kruse’s book as a special roundtable feature in the journal.”

Why all the attention?  The book “overturned a standard interpretation of one of labor history’s most studied and celebrated events, the Haymarket Riot and Trial that occurred in Chicago in 1886,” Menon explained. “For nearly a century, historians have depicted the trial that led to these activists’ martyrdom as a corrupt farce . . .  Messer-Kruse reveals in what one reviewer called ‘a top-notch detective work’ that previous scholarship rested on faulty and inaccurate sources uncritically repeated from work to work.”

Messer-Kruse has “actively engaged the critical attention that his work on the Haymarket trial has received by responding to interviews, sharing his work at conferences, and discussing his research in public venues,” Menon wrote. “In the national arena, he has drawn attention to the productive energies of our BGSU faculty.”