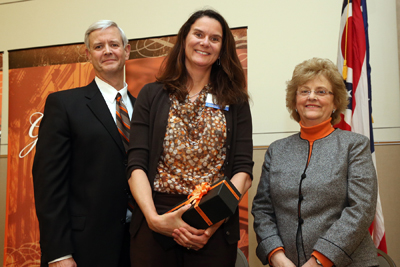 The award recognizes professors who have established outstanding national and international recognition through research and publication or creative/artistic achievement in their disciplines. The BGSU Board of Trustees will vote on the designation at its May 3 meeting.

During her BGSU academic career, Manning has published over 60 articles in leading journals in both her discipline and her specialties, her work cited over 1,900 times. She has co-authored a book, and 16 book chapters. Manning has also co-authored nearly 30 articles and four book chapters with students, helping to jump start the careers of several new scholars.

She is highly praised for her ability to secure extramural grants. During the past 17 years at BGSU, Manning has earned over $15 million in grants - two of them funding two major research centers on the BGSU campus.

"Manning has been a leading figure in both family sociology and demography at the national and international levels," wrote Dr. Gary Lee, chair of the sociology department. "Her research receives so much extramural funding because it is important, of the highest quality, and on the cutting edge in her field."

Manning is regarded by her colleagues as one of the leading authorities in the country on the consequences of cohabitation for adults and children. Dr. Sara McLanahan, the William S. Tod Professor of Sociology and Public Affairs at Princeton University, calls her "the top family demographer in her generation."