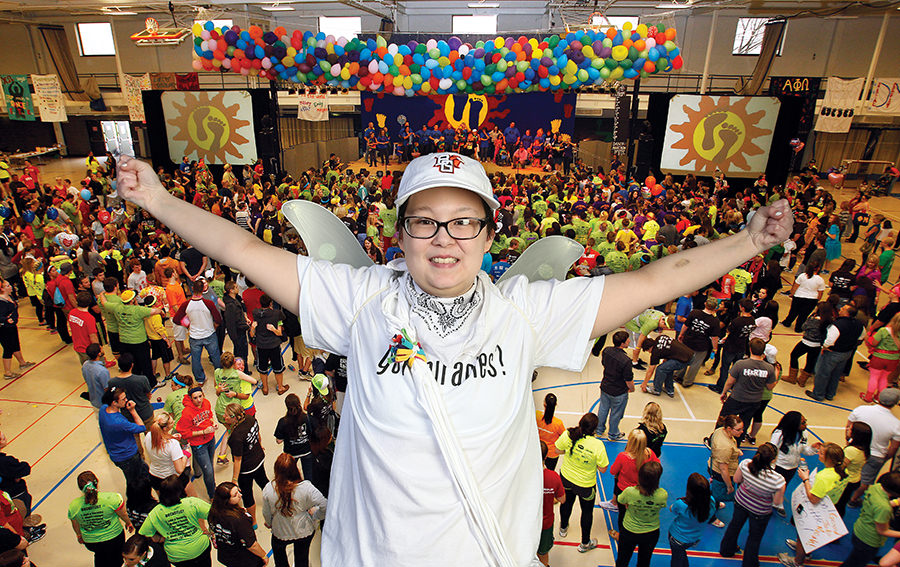 "I want to be one of them!" said 11-year old Natalie Swiecicki in awe as she experienced Dance Marathon for the first time. She remembers walking into the Student Recreation Center and watching people screaming and dancing. She also remembers being drawn to the stage and looking up at "those crazy people" with superhero admiration. Currently a junior at Bowling Green State University majoring in Human Development and Family Studies, Swiecicki's wish has come true. Her first experience with Dance Marathon was as a miracle child; but now, having come full circle, she leads the dance event as one of those crazy morale captains.

At six years old, Swiecicki was diagnosed with Common Variable Immune Deficiency. This condition means that her immune system is unable to fight infection resulting in frequent illness. Even now, she travels to St. Vincent's Medical Center in Toledo, Ohio, every four weeks and spends the better part of the day receiving an Intravenous Immunoglobulin (IVIG) treatment. The IVIG is a plasma protein replacement therapy for immune deficient patients, that helps Swiecicki's immune system produce enough antibodies to fight off infection. She fondly recalls one treatment when her dance marathon friends showed up to sing Christmas carols, "sung badly, but still sung," laughed Swiecicki.

Playing out in the snow for hours and staying up all night at slumber parties are just a few childhood activities many children take for granted. Swiecicki has never been able to participate because it leaves her body susceptible to illness. As a student, Swiecicki is unable to experience the nightlife of downtown Bowling Green or live in the residence halls because of being exposed to germs. She didn't have a normal childhood and doesn't expect to have a normal adulthood, but that doesn't stop her from living life to the fullest.

One of the nurses at St. V's was responsible for telling Swiecicki and her family about being a miracle child. The Children's Miracle Network raises funds to help families of children with serious illnesses in a number of ways. A major contributor to the cause is the annual BGSU Dance Marathon, which is one of the five founding Dance Marathons in the U.S. and has raised more than $2.7 million with over 400 student participants each year.

"The committee works year round, from the day after Dance Marathon until those balloons drop, they are putting their heart and soul into this organization"One of the highlights of the campaign, and also the most well-known, is the 32-hour dance finale held each spring in which the student dancers stay on their feet the entire time, aided by morale captains, security members, gamers and runners. At the end of the 32-hours, the amount of money raised is revealed. This year's Dance Marathon Director, Megan Leiss, wants people to know that you don't have to be able to dance to be a part of the fun. While many students assume you are dancing the whole 32-hours, the committee only asks that you stand the whole time. It's called Dance Marathon because of the line-dance you learn in increments throughout the event.

"It's not your typical line dance; it's a mix of YouTube, movie clips and songs," Leiss said. "It's something that is quite fun and does not require any dance experience to learn."

Swiecicki became involved with Dance Marathon early in her freshman year. She went to one of the first fall semester meetings and was surprised with the number of options for getting involved. Still recalling her childhood memory of the morale captains on stage and her wish to be one of them, she approached former morale captain Lindsay Boyd and told her that she was interested in the position but knew that she could only participate in a limited capacity because of her illness. Boyd had an idea that evolved into the creation of the White Miracle Child Morale Captain position, to join the other color-coded morale captains, for which Swiecicki applied and was selected. This is essentially a morale captain for the miracle children.

Morale captains are each assigned a color which is always a big deal and the morale captains "flair out" in their respective colors and lead their color team. Their job is to get their group excited as well as make sure they stay on their feet, eat with them, give them foot rubs, back rubs and offer encouragement. Swiecicki's main responsibility is to keep the committees updated on the health of the children. In addition, she works closely with the Family Relations Committee at the event and assists with the children's mini line dance and talent show. She has served in this role for three years and last year raised $1,000 of her own to support the children she has grown so close to over the past 10 years.

Being on the other side of Dance Marathon made Swiecicki realize all of the preparation that goes into the event.

"The committee works year round, from the day after Dance Marathon until those balloons drop, they are putting their heart and soul into this organization; and now, being a student, I understand that," she said. The students work hard together all year long. "These people they aren't just your friends, they aren't just your committee, they are your family."

The Dance Marathon experience at BGSU has fostered such a loyalty to the event and what it means to the families and children that Swiecicki is using her experience as the foundation in which she hopes to build her career. She plans to pursue her master's degree in College Student Personnel and go on to start a Dance Marathon at a university that doesn't have such an organization.