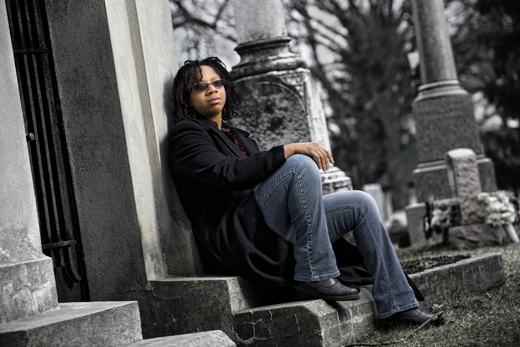 BOWLING GREEN, O.—African Americans over the past 200 years have not needed to read stories about ghosts and haunted mansions to experience horror. Their own lives have too often been the source of true terror, said Dr. Maisha Wester, an assistant professor of English and American culture studies at Bowling Green State University. But a number of African American writers have embraced the gothic genre of literature to express the madness and danger of black people’s existence.

A new book Wester by analyzes texts from each of the major literary periods by African American writers who have employed the gothic style. “African American Gothic: Screams from Shadowed Places,” published in November by Palgrave MacMillan, begins with slave narratives and continues to contemporary writers, covering such authors as Charles Chestnutt, whose career spanned the late 1800s to early 1900s, Richard Wright, Ralph Ellison, and Toni Morrison and Alice Walker, writing today.

Gothic literature is marked by characteristics such as haunted and ruinous landscapes and houses, family curses, hidden or illegible manuscripts, vampires and the presence of the “Other,” Wester said.

These early narratives, usually written by freed slaves, were taken up again in the 1970s by African American writers who, using the conventions of the gothic, “revised the genre quite substantially to portray the peculiarities of being an African American,” Wester said. Their writing tends to critique American gothic literature’s representation of African Americans as servile bodies, evil and villainous monsters. Another trope of gothic literature is the “unspeakable,” and certainly the horrors visited upon African Americans, such as incest, are real-life examples of events that must have remained hidden.

Madness is another feature of gothic literature, but in the African American version it is often the paranoia that results from the inability to correctly perceive the world through the distorted lens of one living in a society that tells you you are not human and turns normal feelings upside down.

Whites’ perception of black people caused whites more anxiety about racial miscegenation, or mixing of the races, than anything that black people did among themselves, Wester writes. Miscegenation was considered more deviant than homosexuality or incest, and African Americans were portrayed as not having normal sexual desire or the ability to be monogamous.

“Blacks have assimilated to the tropes of horrors in trying to assimilate to the heteronormative ideal of white America,” Wester said, and continue to inflict violence and oppression on one another.

“For African American gothic writers, what is horrible and truly terrifying is not the haunted but the national ideology and social circumstances,” she said.