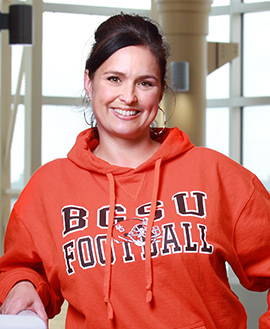 After years of part-time study, the Mruk Family Scholarship is helping this non-traditional student to earn dual degrees from BGSU Firelands within the next year. Katia faced several challenges that threatened her plans to finish her college education. She was a first-year BGSU student 25 years ago when she discovered she was pregnant. Later as a young mother she struggled with an abusive partner. "Rather than have this be a nightmare and a bad part of my life, I thought I would show other women that you can survive," she said. She expects to earn her bachelor's in social work in December, 2013, as part of the first cohort in the program. Her ultimate goal is to continue her education to earn her master's degree in social work, in order to support other survivors of domestic violence.

Why BGSU?
"I started in 1987 as a voice performance major, was accepted into the program and wanted to work with the music instructors at the time. I was hoping to eventually go into music therapy, so I knew social work was in my blood. I wanted to do something in the helping professions."

How do you spend your time out of class?
"When I'm not studying or spending time with my four children, I'm volunteering as a victim's advocate at Safe Harbour, a domestic violence shelter in Sandusky. Last year, I earned a Feminist Falcon Award for helping to organize the first benefit performance of the Vagina Monologues at BGSU Firelands."

Advice for first-year BGSU students?
"Get involved, because the college experience is much more than just academics and the degree. Love learning and embrace the journey."