"I guess I've come full circle," said Rhonda Sewell, adjunct instructor in the Department of Journalism and Public Relations, School of Media and Communication, and faculty adviser to the student Association of Black Journalists. "I was actually raised in the Alpha (Alpha Phi Alpha Fraternity, Inc.) house at BGSU during my dad's undergraduate career during the 1960s.

"My mother says I might have been the first African-American baby to be born at Wood County Hospital. There just weren't that many African-American families living in Bowling Green at that time," she said. 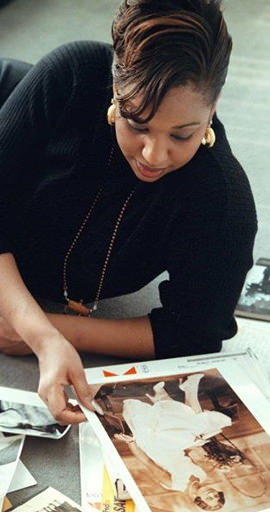 Now Sewell has received the fraternity's Drum Major Award, given to people or organizations who have served the community in the spirit of Dr. Martin Luther King Jr. Even though she has received many awards for her community work over the years, for Sewell, this one was special. "I was so moved. Those guys helped raise me. There was a familial feel to the event. I admire these men so much-they are devoted to community service and education and they're family men. It also touched me that the award is named for Dr. King and encourages us to take up that torch and carry it forward but also to dream new dreams and create our own destiny."

She was presented the award on behalf of the Alpha Xi Lambda Chapter, the alumni chapter in Toledo, at the annual breakfast, on Jan. 19. Addressing the gathering was Rev. Kevin Bedford, senior pastor of Third Baptist Church in Toledo and president of the Toledo branch of the NAACP.

"Rhonda Sewell has been a beacon of light in the Toledo community as her service goes back many years," wrote one of her nominators. "In 2012 she was named by the African American Legacy Project as an Emerging Leader. She was also appointed to the Board of Directors of the Toledo Children's Hospital Foundation. Rhonda helped plan Toledo's first TED (Technology, Entertainment, Design) conference by serving on the Logistics and Strategy team."

In addition to teaching at BGSU, Sewell is media relations coordinator for the Toledo-Lucas County Public Library, where she has worked the last seven years, and for 18 years was a reporter for The (Toledo) Blade.

"We're excited to have her teaching for us," said Dr. James Foust, School of Media and Communication. "She has a good rapport with the students and she brings great professional experience in print, public relations and other aspects of journalism."

"It was a natural fit for me," Sewell said. "I feel I can present real-life issues and questions to the students. And I love them-they are wonderful and eager to learn."

This is Sewell's second stint teaching at BGSU. She also taught ethnic studies classes in the 1990s.

Sewell is a dedicated community volunteer, serving on numerous organizations' boards and committees, including the Northwest Ohio Chapter of the Public Relations Society of America, Inc. board and the editorial board for Your Health, a ProMedica publication. She has also been a board member for YWCA Northwest Ohio, Toledo Ballet, the Art Tatum African American Resource Center, and the American Heart Association of Greater Toledo. She is an active member of the Toledo Press Club; The Links, Inc.; Alpha Kappa Alpha Sorority, Inc., and Jack and Jill of America, Inc.

In 2008, she was named by the Toledo Jack and Jill chapter as "Distinguished Mother of the Year," and received the Rabbi Morton Goldberg Community Service Award, presented by the city of Toledo's Board of Community Relations. She is a multiple award-winner of the Ohio Newspaper Women's Association and the National Association of Black Journalists.

She graduated from Michigan State University with a bachelor's degree in journalism and attended the City University of London (England), where she studied international journalism.

Sewell is at work on several book projects, including a children's book about her late cousin Willa B. Brown, the first black female licensed pilot in United States history. Sewell plans to complete the book project with celebrated Toledo portrait artist Leslie Adams.