A 'super' weekend in the big easy 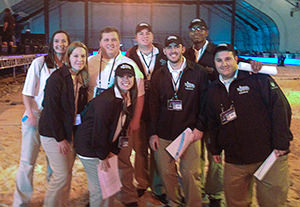 The students are all members of the Sport Management Alliance (SMA) an undergraduate student organization that put together the trip. Senior Hunter Haas, vice president of the SMA, started the planning process last fall.

"I just sat down and said I wanted to do something to leave my mark, so I sent out a few emails," said the Perrysburg native. "I heard back from the Super Bowl volunteer coordinator, who happened to be the nephew of a sport management faculty member. It evolved really quickly. He said 'we'll get you into something if you can get down here.'"

Sport management students were encouraged to join the SMA and apply for the chance to go on the trip. After reviewing the questionnaires, faculty members selected 12 people to interview and then narrowed the group down to the eight students they felt would best represent the program in New Orleans.

Students didn't waste any time once they arrived in the Big Easy. On Feb. 1, they worked a shift at the NFL Experience - an interactive event that features punt, pass and kick games. But it was what they did Feb. 2 that still has them in shock.

"It was just a regular Hollywood party. We were wondering 'How did we get into this?'"All the students were assigned celebrities for the day and were in charge of getting them into the event, getting them gift bags, getting them on and off the field and assisting their family. Some of the notable names included NFL superstars Deion Sanders, Desmond Howard and Terrell Owens, rappers Snoop Dogg and Lil' Wayne and actor Neil Patrick Harris.

"It was pretty amazing," Haas said. "You got to see how the celebrities acted with each other. Some of them were very star struck, while others were good friends. We also had a great experience learning about crisis management. Things went wrong and we just had to adjust."

According to junior Lori Raudio, the walk-through before the event ended up being nothing like the event itself. "During the walk-through they told us one thing and the next day that didn't happen. We had to jump in and follow the flow as best we could. You just went with it and saw what other people were doing and jumped in."

Their hard work paid off later that night. During dinner they received a message from the event coordinators thanking them for their efforts and inviting them to a private party that night featuring a concert by Justin Timberlake.

"It was like nothing I've experienced," said junior Adam Sehlmeyer. "People dancing, celebrities everywhere, we walked past (Dallas Mavericks owner) Mark Cuban. It was crazy and the Justin Timberlake concert was just awesome."

"It was just a regular Hollywood party," said Raudio. "We were wondering 'How did we get into this?'"

Raudio thinks they got the coveted invitation because they were one of the few volunteer groups to respect the no cell phone rule during the match. "Our group wasn't taking pictures and wasn't interacting with the celebrities. At the end, everyone had their cameras out except for us."

The group spent Super Bowl Sunday working an NFL tailgate, once again surrounded by VIPs and celebrities. The students helped them get in and out of the area, answered questions, gave directions and managed crowd control. They also helped solve a problem with that quintessential New Orleans party favor - beads.

"Basically we weren't able to give everyone beads because they were all tangled," explained Haas. "Two of our students sat down and fixed it and then they were handed out successfully."

Haas says that's just one example of the problem solving that went on all weekend. "We had to think quickly on our feet, use our common sense and what we'd been taught in class. Being respectful, but also letting these celebrities know that they had to be somewhere at a certain time. Our students stepped up and really represented the school well."

Sehlmeyer says watching the people handling volunteer credentials on Super Bowl Sunday showed him the value of keeping a cool head in a crisis. "They lost a bunch of them. We sat in line for hours while they were looking for them and they ended up handing us wristbands for our credentials. They were staying calm and trying to figure out what to do - trying some options to resolve the situation and looking at different options to keep everyone happy."

Haas, Raudio and Sehlmeyer all agreed that it was amazing to see the sheer volume of work that goes into making an event of this magnitude successful.

"From what people are going to eat, to putting up signs for where people have to go - lots of things go wrong with an event, but the main thing is that the public doesn't see that," said Haas.