Project Learning Around the World hopes to expand 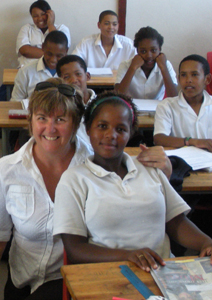 Since 2005, with the help of graduate students in the school-psychology program in the College of Education and Human Development and colleagues from the School of Intervention Services, Ellenwood has been able to bring much-needed supplies to rural schools in South Africa each year.

The mission of the charity is to alleviate some of the difficulties the children face in the rural townships, where most are orphaned and limited to one meal a day, and about 80 percent of schoolchildren have AIDS. The project hopes to remedy the children’s educational needs by providing books and other supplies for the schools.

In 2008, the project began to work with Alan Winde, the South African minister for finance, economic development and tourism, to bring educational supplies such as books and calculators to rural schools in Knsyna, South Africa. Graduate students also began bringing personal-hygiene supplies to an abused women’s shelter and donating playground equipment for the children.

Project Learning Around the World is made possible by Ellenwood and nine others on the board of directors in the United States, along with South African educators and community organizers.

Ellenwood hopes to expand the project beyond BGSU in 2010 and reach out to new organizations, student groups and schools. Those would like to donate, become involved or learn more about Project Learning Around the World, may visit http://www.platw.org. For more information, contact Ellenwood at aellenw@bgsu.edu.