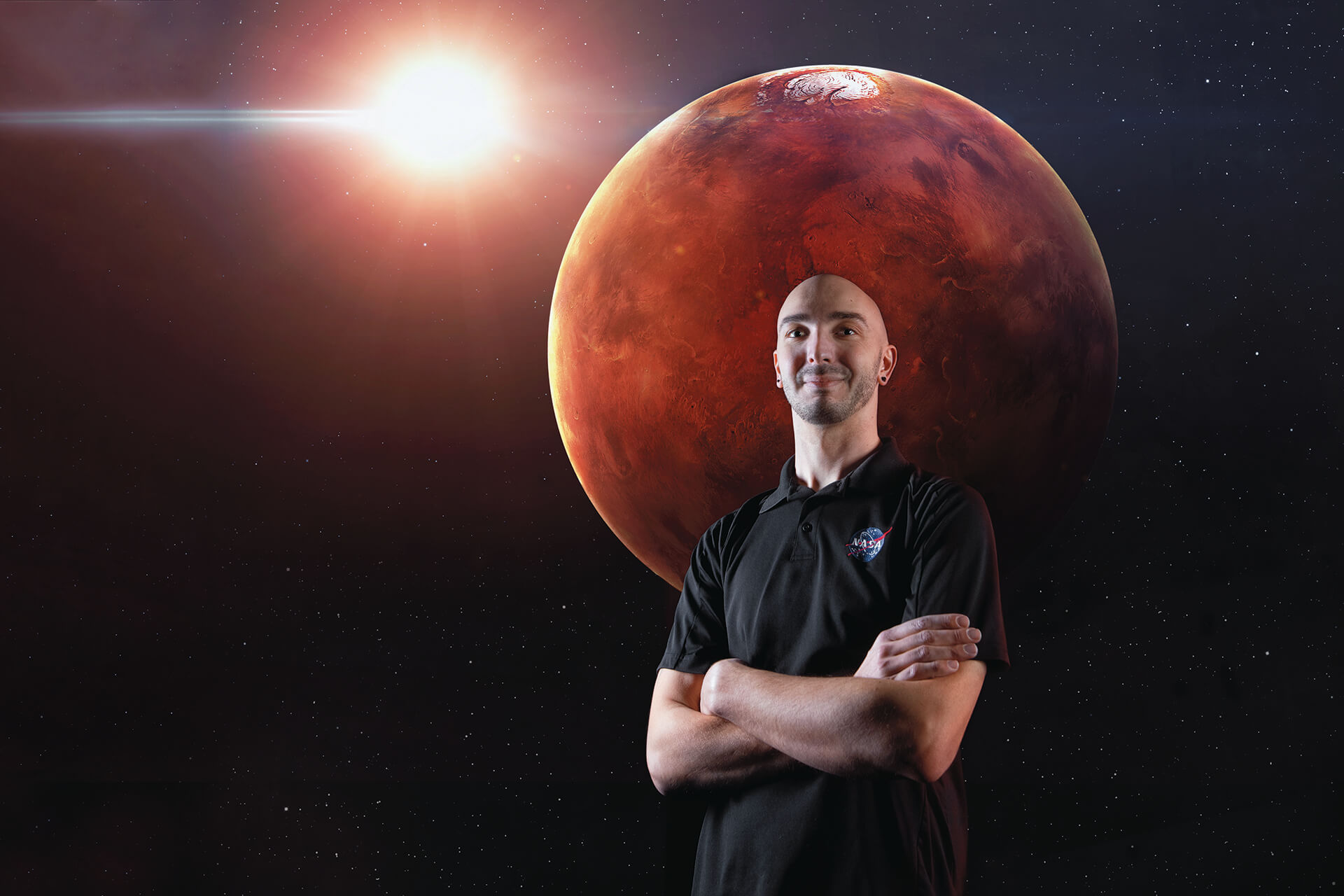 Whenever the United States sends a manned mission to Mars, it will take 300 days to get there. Matthew Burmeister, who is majoring in electronics and computer engineering technology (ECET) with a minor in computer science at BGSU, spent almost as much time away from his family last year as an intern with NASA. Burmeister, a former Marine who is married with four young children, worked toward the goal of realizing a Mars mission in two different co-ops — at the Johnson Space Center in Houston and at the Kennedy Space Center in Florida.

Matt Burmeister used to think that his chances of excelling as a nontraditional student were about the same as sending a man to Mars.

Now, neither of those scenarios seem so far fetched.

Not only is Burmeister on the cusp of graduating from Bowling Green State University, he very well may be employed by NASA by the end of summer. He is majoring in electronics and computer engineering technology (ECET), and has a minor in computer science.

And when NASA does send a manned mission to Mars, it will do so thanks to the important work he undertook during his two co-ops last year, one at the Lyndon B. Johnson Space Center in Houston and the other at Kennedy Space Center in Florida.

“All the work we did was to get ready for the next manned missions that are getting launched,” Burmeister said. “The work that I’ve done in Texas and Florida will be used for the manned mission to Mars, which is really cool.”

In high school, he lost his passion for learning and dropped out. Burmeister then decided he wanted to join the Marine Corps, so he had to go back to school to get his diploma in order to enlist in the armed forces.

After serving in the Marine Corps, Burmeister, 30, decided to attend BGSU Firelands in his hometown of Huron, Ohio.

“At first, I thought I’d go for an associate degree, but after I got going I thought, why stop there?” he said. “I was going to school with the G.I. Bill, so I wanted to get as much as I can out of it.”

Even then, he thought he might have missed his chance and maybe was too old to capitalize on his education. Burmeister’s wife, Sarah, however, encouraged him to apply for internships that could help pave the path for his ECET degree.

“I always had an interest in space exploration, so I applied to Glenn Research Center in Cleveland and Plum Brook Station in Sandusky because they were close to home, as well as the others, but then when the Johnson Space Center said yes, I couldn’t exactly say no,” he said. “Getting accepted to that co-op made me realize I hadn’t missed my chance and this is something I could really do for a profession.”

Resmi Krishnankuttyrema, an instructor in the College of Technology, Architecture and Applied Engineering (CTAAE), can attest that Burmeister had the right stuff to intern at NASA.

“I noticed Matthew as an observing and hardworking student,” said Krishnankuttyrema, who had him in two ECET courses. “He typically asked questions that went deep into the subject and into the real-world applications of the topic at hand. I believe that these analytical and problem solving skills are what industries and institutions such as NASA expect out of our graduates.”

Dr. Sri Kolla, an ECET professor, is Burmeister’s faculty adviser. He interacted with him and his NASA supervisor during the co-op.

“Matthew is an excellent student in our ECET program,” Kolla said. “He has taken several courses with me for his ECET degree and his performance has been outstanding in those courses. He participates very well during class lectures, always stepping forward with answers to questions. He has exceptional hands-on experience and works well independently and also with others in a group during our class lab experiments. It has been a delight to know him professionally.”

During Burmeister’s co-op in spring 2018 at the Johnson Space Center, he mostly used his computer science minor when he worked at the Risk and Reliability Analysis Branch within the Space Exploration Division. His co-op work involved completion and deployment of a central database to collect and categorize every component — more than 120,000 — of the International Space Station with relevant failure data, taxonomy map and material tags for the use in future crewed space missions.

After the spring semester, Burmeister was selected for NASA’s Pathways Internship program at Kennedy Space Center in the summer, where he applied the skills and knowledge he has gained in the ECET program. It is a comprehensive study of diverse areas such as computer hardware and interfacing, computer-based instrumentation and process control, digital communication and networking, and electric motors and controls.

“At Kennedy, I worked on all of the networks, servers and switches — all that fun stuff that’s involved in rocket launches,” he said. “I worked in the server rooms and did all of the hardware components and running lines, creating new sets and fixing diagrams.”

Through NASA Pathways, Burmeister also has been selected to complete another internship this summer at Kennedy, which, in all likelihood, will lead to a full-time job with NASA.

“The internships were a lot of work,” he said. “In the Pathway program, it’s more intense and I wanted to make a good impression. When I was in Texas, I got to meet a lot of astronauts. I attended their lectures, talked with them and even played kickball with them. I feel like it was an experience of a lifetime.”

Still, even though Burmeister was gaining valuable experience that he couldn’t get most anywhere else, he dearly missed his family.

“It was really hard not being with my family,” Burmeister said. “I mean I barely saw them for eight months. It was really tough, from being there for the kids their entire lives and then jumping away, and that made me feel bad for a little bit. But the whole time, my wife had my back. She said, ‘It’s totally worth it; you have to do this. It’s rough now, but things will get better.’”

Now that Burmeister is near the end of his collegiate journey, and his career path appears to be aligned with the stars, all of his dedication and sacrifices are about to pay off.

“It’s hard, especially when you have a life outside of school,” he said. “You have to worry about work and family. I have four kids, so whenever I’m not here, I’m taking care of them. It was a lot of hard work, but now I can see all of the opportunities in front of me because I will have an ECET degree from BGSU. That makes it all totally worth it — especially for my family’s future.”