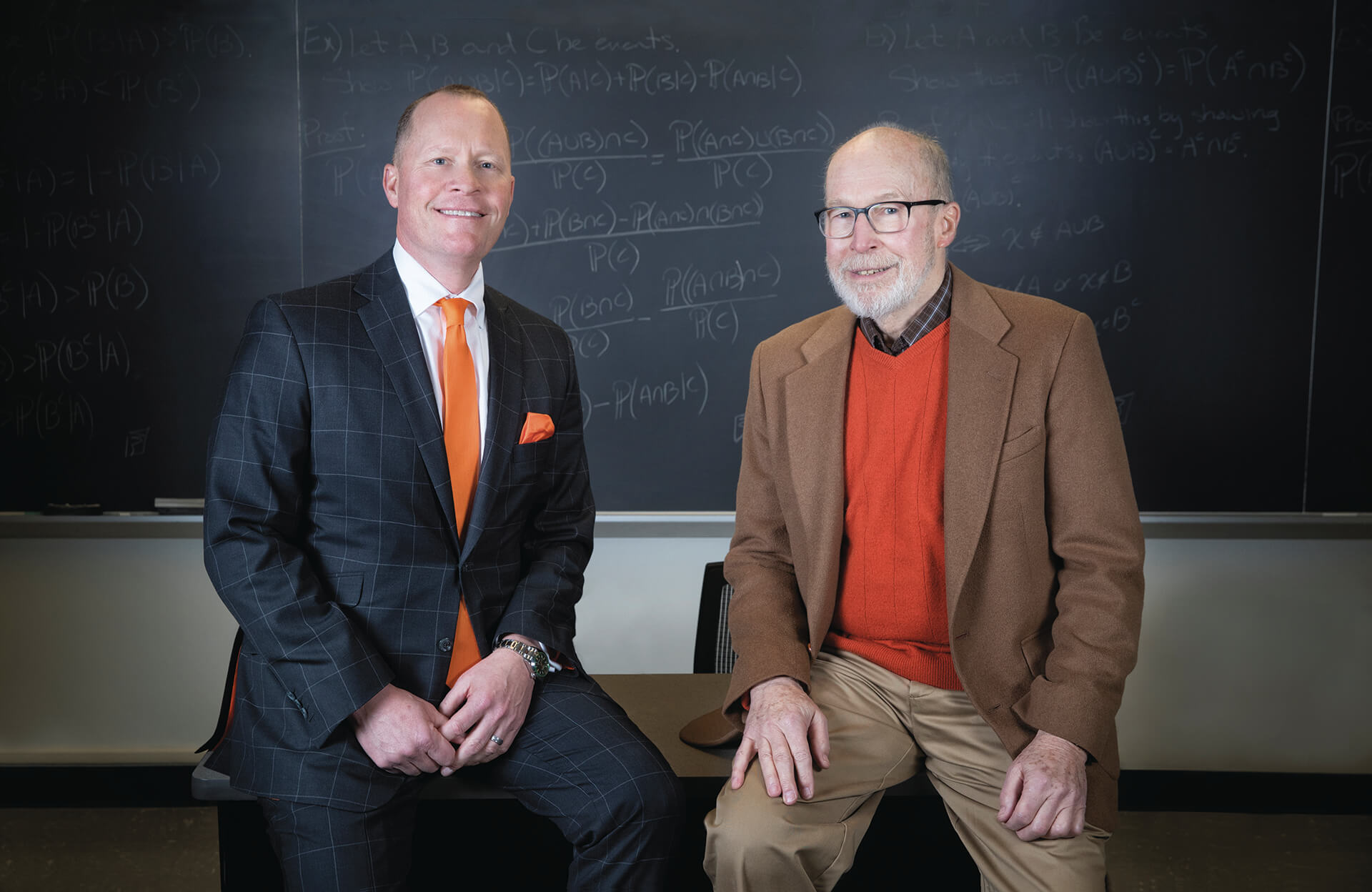 O’Brien Professorship is the product of lessons learned at BGSU

IT WAS MORE THAN 45 YEARS AGO that a Bowling Green State University freshman walked into calculus class in his first fall term on campus, and sat down to listen to an instructor whose knowledge, delivery and zest for the subject would leave a lasting impression on the young student.

Dr. Thomas O’Brien presented mathematics in an interesting, oftentimes exciting, and always passionate manner, and that unique approach had considerable staying power with Rob Armstrong, who would go on to become a 1977 graduate with a degree in accounting.

“An excellent instructor to us silly freshmen coming in,” is how Armstrong characterized his impression of Dr. O’Brien. “Patient, mild-mannered and really able to connect. I remember his smile because it was not a big smile and it arrived slowly when it came. He and I got along very well.”

David O’Brien was all of 7 years old at the time his father was taking Rob Armstrong and that collection of “silly” freshmen through the foundational nuances of calculus. But that note from one of the multitude of students who toured the world of mathematics in his father’s classes, and David O’Brien’s personal observations of his father’s lifelong commitment to education and unravelling the myriad mysteries of numbers, leave the son filled with pride and respect for that unwavering devotion to teaching others.

Today, David O’Brien serves on the BGSU Board of Trustees and has endowed a professorship in the math department in his father’s name. He fondly recalls the email message that arrived from Armstrong at the time David was appointed to the board.

“I remember receiving that note, from someone I didn’t know, but he had been in my dad’s class more than 40 years ago and he still felt strongly enough about the experience that he had to write to me,” David O’Brien said. “I think that speaks to the impact that a college professor can have on a student, and a lot of times it is likely something the student won’t realize until many years later. That said a lot to me about what kind of instructor my dad was.”

Tom O’Brien taught mathematics at BGSU for 30 years, impacting the lives of many students as he brought them math with enthusiasm, and with the fervor of an evangelist of differential equations.

“He loved math and he was a very serious guy who wanted serious students,” David O’Brien said of his father. “He was tough, as most math professors are, but that was because he cared a great deal about teaching and having the students learn.”

David O’Brien said it was clear to him early on that his father loved what he did, and he wanted to share that enthusiasm for mathematics with these students who took his classes. Sometimes their appreciation surfaced after much time had passed, but Tom O’Brien said he didn’t mind the delayed reaction.

“I really enjoyed the classroom and academic life,” he said. “And it certainly was rewarding having successful students — those students who maybe didn’t appear to appreciate you as much at the time, but then you would get notes from them years later. It doesn’t take a lot of those to make you feel good about the work you did.”

Tom O’Brien was quite familiar with the impact a great teacher could have on students, since it was just such an association that put him on the path to his career as an instructor of mathematics. He was a high school freshman getting his first concentrated dose of algebra when that light came on.

“I think my interest in mathematics very much traces to my high school algebra teacher, who was not only a very good teacher, but also a very personable individual,” he said. “Besides being an excellent teacher, he was an interesting guy who spoke French and Latin, he was a good athlete and a charming individual. His classroom was a comfortable place to learn, and that got me interested in mathematics, and I’ve been interested ever since.”

Professor O’Brien’s fascination with math and physics only grew from that ignition point, and he went on to attend Xavier University for his undergraduate work in those areas of specialized study. He was encouraged by his instructors at Xavier to pursue graduate work, and, after graduation, he received a master’s in math. O’Brien went to Syracuse for his doctoral studies and completed that degree while a visiting student at Northwestern.

After spending five years on the faculty at Marquette, Tom O’Brien was considering several options to advance his career, including a position at BGSU, which turned out to be the most appealing. He arrived on the Bowling Green campus in 1969, and after two years as an assistant professor he was promoted to associate professor.

When he came up for consideration for a full professorship, an internal document created at the time by his superiors recommended him for the post, citing what they called “the relaxed and spontaneous atmosphere” in his classroom. They also noted that his “contribution to the teaching function of the department is commendable.”

Tom O’Brien was also lauded for his work in actuarial mathematics, and for providing the basis for graduate and undergraduate studies for those students interested in the actuarial profession. His research and work in actuarial mathematics was cited in several highly respected professional journals and referred to as “ground-breaking” as it had “attracted a considerable amount of attention in the field,” his recommendation for promotion said.

The teaching post that will carry his name remains true to that core area of Tom O’Brien’s expertise. It will be called the “Dr. Thomas V. O’Brien Distinguished Professorship of Actuarial Mathematics.”

The actuarial program at BGSU has been very successful since its inception, and the endowed professorship will guarantee that this success will continue.

“We are grateful for Dr. Thomas O’Brien’s faculty service for three decades. Through his teaching and research, he has impacted the lives of thousands of our students,” BGSU President Rodney K. Rogers said. “Trustee David O’Brien’s endowment of a professorship in his father’s honor showcases our promise to our current and future students to attract and retain the same caliber of world-class faculty. It is endowed professorships that position BGSU to educate and prepare our students to live meaningful and productive lives.”

Dr. Raymond Craig, dean of the College of Arts and Sciences, sees the endowed position as having a far-reaching impact.

“The Dr. Thomas V. O’Brien Distinguished Professorship not only honors Dr. O’Brien, but also honors the tradition of strong engagement between faculty and students that helps our students succeed,” Craig said. “This professorship ensures that our faculty will continue to provide the strong theoretical foundation for students who will immediately transition into a changing workplace.

The collaboration with the College of Business required of the distinguished professor in this position also ensures that the theoretical and practical meet — that too will lead to student success.”

David O’Brien also relishes the dual role the professorship carries, paying tribute to his father and at the same time strengthening the faculty.

“I wanted to do something to honor him and formally let him know that I was impressed with the work he did,” David O’Brien said.

“I also wanted to give back to the University and honor what my dad accomplished while he was on the faculty. I’m extremely proud of how seriously he took his job.”

He earned a Bachelor of Science in business administration from the University in 1989, with a double major in finance and risk management/insurance.

“His actuarial math program is essentially what got me into this business,” David O’Brien said of his father’s cutting-edge studies. “His efforts and accomplishments served as a springboard for my life’s work.”

Tom O’Brien said that from the beginning of his time on campus, he thrived in the active learning environment at BGSU.

“I think I was fortunate to come to Bowling Green at a very good time,” he said. “There were quite a few young people who came into the math department at about the same time, so it was growing and there was a lot of energy — a lot of social energy in addition to mathematical energy. I also had the luxury of working with colleagues that I really enjoyed.”

Tom O’Brien said he hopes so see the endowed professorship help keep the mathematics department at BGSU on an upward trajectory.

He and his wife, Barbara, have continued to live in Bowling Green following his retirement, and he regularly meets with his fellow retirees from the University.

“I didn’t come here with the intention of staying for 50 years, but this turned out to be a great place to raise a family, and to teach,” he said. “We like Bowling Green, that’s why we are still here.”