The Life of J.P. Scott 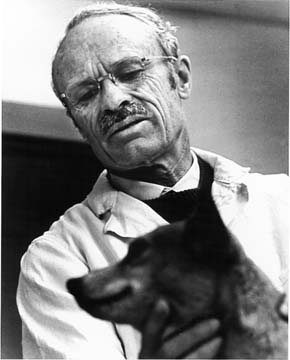 With the passing of John Paul Scott, the field of animal behavior and the Animal Behavior Society lost a major figure who did much to help establish, develop, and promote the field.

Paul was born in Kansas City, MO, the son of John W. Scott, who soon became the long-time chair of the Department of Zoology at the University of Wyoming and a distinguished researcher in the field of parasitology. Late in his career, the elder Scott described the lek system of sage grouse. Paul's mother was a housewife with two years of study at the University of Chicago. He was the second of six children in the family. Paul graduated from the University of Wyoming after just three years of study with letters in football and track and a B. A. in zoology with minors in English and psychology. After his sophomore year, he spent a summer at the Marine Biological Laboratory at Woods Hole. He then received a Rhodes scholarship to attend Oxford University, where, in 1932, he took a first class in the honor school of natural science. After two years at Oxford, he attended the University Chicago, receiving a PhD in Zoology under Sewall Wright in 1935. Wright, a prime developer of the synthetic theory of evolution, had major influence on Scott's thinking. Scott's dissertation dealt with embryology in guinea pigs, where he encountered the concept of critical periods that would be important in his later work. At Chicago he began research in behavior genetics, working with fruit flies in association with another major influence on his approach, W. C. Allee. Following graduation, during the depression, he took a job as chair of the Department of Zoology of Wabash College.

In 1945 Scott moved to the Jackson Laboratory in Bar Harbor, ME, where he was the founding head of a new Division of Behavior Studies. He remained there until 1965. He built the program into a group of eight staff members and post-doctoral fellows. Wanting to return to academic work, Scott moved to Bowling Green State University as the Director of Graduate Studies in Psychology and Research Professor, later Ohio Regents Professor. At Bowling Green, Scott established a Center for the Study of Social Behavior. He retired in 1980 as a Regents Professor Emeritus of Psychology. He was also a fellow of the Center for Advanced Study in the Behavioral Sciences during 1963-64 and a Research Professor at Tufts University during 1981-82.

In 1933 Scott married Sarah (Sally) Fisher, daughter of novelist Dorothy Canfield Fisher. They had two daughters and two sons. Sally died in 1978. Paul married Mary-Vesta Marston in 1979. She had degrees from Harvard and Yale, had earned a PhD in social psychology from Boston University, was a professor in the School of Nursing there, and earlier had been a research assistant with Paul.

Scott's research interests were always informed by the great world events of his time and his concern with conducting research that might reduce violence, foster peace, and improve economic prosperity. His primary interests were in behavior genetics, development, and social behavior.

A major accomplishment in Scott's career was the development of the behavior program at the Jackson Laboratories. He organized a Summer Investigator Program, in which numerous scientists and students could spend their summer in Bar Harbor conducting research. In 1947 Scott was joined at Bar Harbor by John L. Fuller, who would collaborate with him on much research. The program began with behavior-genetic studies of the many inbred strains of house mice maintained in the laboratory there. Aggression and audiogenic seizures were primary topics. He came to believe that aggression was not innate but was the product of complex interactions between genetic and environmental factors. Scott and Fuller then developed a program of research on dogs, concentrated on five breeds maintained at the Behavior Station near Bar Harbor. An extensive series of studies on genetics and development led to Scott and Fuller's classic Genetics and the Social Behavior of the Dog (1965). The book has been reprinted several times. They found evidence of both important genetic and environmental influences on the behavior of dogs. The dog research was definitive, was important within the field of animal behavior, and also influenced many outside of the field who worked with dogs and with human development in various capacities.

The developmental research led to a classification of the development of behavior of dogs and other species into stages: neonatal, transition, socialization, and juvenile. Scott used the critical periods concept, that organizational processes are most easily modified when they are proceeding most rapidly, to develop general theory about the role of experience in development. As a practical consequence, he was able to recommend the period of approximately 8-12 weeks of age as the ideal time to move puppies from their mothers to human homes.

Scott organized two key conferences at Bar Harbor, one on "Genetics and Social Behavior" in 1946 and the other on "The Effects of Early Experience on Mental Health" in 1951; they were pivotal in coalescing developing interest in animal behavior in North America into a coherent sub-discipline.

More than any other single person, John Paul Scott was responsible for the formation of the Animal Behavior Society. At the 1946 conference, he, along with comparative psychologists C. Ray Carpenter, T. C. Schneirla, and Frank A. Beach, established an ad hoc for Committee for the Study of Animal Behavior Under Natural Conditions; this committee was brought under the auspices of the Ecological Society of America (ESA) in 1952. A 1948 "Conference on Methodology and Techniques for the Study of Animal Societies" at the New York Zoological Society was organized in 1948. Scott began organizing annual paper sessions on "Animal Behavior and Sociobiology" at the joint meetings of the AAAS, ESA, and American Society of Zoologists (ASZ). In the process, he coined the term "sociobiology," though he used it in a different sense >from that which later became widespread. The group became organized more formally as the Section of Animal Behavior and Sociobiology of the ESA in 1956 and as the Division of Animal Behavior of the ASZ in 1958. Paul Scott served as the first Chairman of the Section, the antecedent of the Animal Behavior Society. He also served on Nominating Committee (1957-1961) and the Committee on an Independent ABS (1962-1964) of the Section/Division and the Policy and Planning Committee (1965-68) and the Public Policy Committee (1970-1973) of the ABS. When the decision to form an independent Animal Behavior Society was finalized at the 1964 meeting of the AAAS in Montreal, it was Paul Scott and Nicholas E. Collias who presented the founding constitution and bylaws. The openness to all, right of all members including students to present papers, and minimization of administrative structure and cliques are all parts of that legacy. He was among the first group of elected ABS fellows in 1966. In 1990, the ABS honored Paul as the first recipient of its highest award, the Distinguished Animal Behaviorist Award.

Scott's Animal Behavior (1958) was an important early textbook in the field. Among his other books were Aggression (1958), Early Experience and the Organization of Behavior (1968), Social Control and Social Change (with wife Sarah)(1971), The Physiology of Aggression and Defeat (with B. Eleftheriou)(1972), Separation and Depression (with E. Senay)(1972), Guide Dogs for the Blind (with C. J. Pfaffenberger)(1976), Critical Periods (1978), and The Evolution of Social Systems (1989). He published more than 237 articles.

Scott received many honors. He was a fellow of the AAAS, the Animal Behavior Society, the American Psychological Association, and the New York Zoological Society and a member of both Phi Beta Kappa and Sigma Xi. He served as Chairman of the Section on Animal Behavior and Sociobiology of the Ecological Society of America (1957-58), President of the Maine Psychological Association (1953-54), Vice President of the Ohio Academy of Science (1969), President of the International Society for Developmental Psychobiology (1972-73), Co-founder and President of the International Society for Research on Aggression (1973-74), and President of the Behavior Genetics Association (1975-76). He received the Jordan Prize of the Indiana Academy of Science in 1947, the Dobzhansky Award of the Behavior Genetics Association in 1987, a Special Achievement Award from Bowling Green in 1974, and a Distinguished Alumnus Award from the University of Wyoming in 1976 and their Outstanding Achievement Award in 1990. Bowling Green has named its new research center the J. P. Scott Center for Neuroscience, Mind, and Behavior.

I first met Paul Scott when I was an undergraduate participant in the summer program at Bar Harbor in 1961. I valued our contacts over the years. Paul was rather quiet and lacked the flashiness of many of his contemporaries. Rather, he was a quiet builder of organizations and structures that advanced the field of animal behavior and a solid researcher and systematizer whose social conscience drove much of his research effort.

An autobiographical chapter can be found in the volume: Dewsbury, D. A. (Ed.) Leaders in the Study of Animal Behavior: Autobiographical Perspectives, Lewisburg, PA: Bucknell University Press, 1985 and reprinted as Studying Animal Behavior: Autobiographies of the Founders by the University of Chicago Press in 1989. International Society for research on Aggression, and served as president of several professional societies.