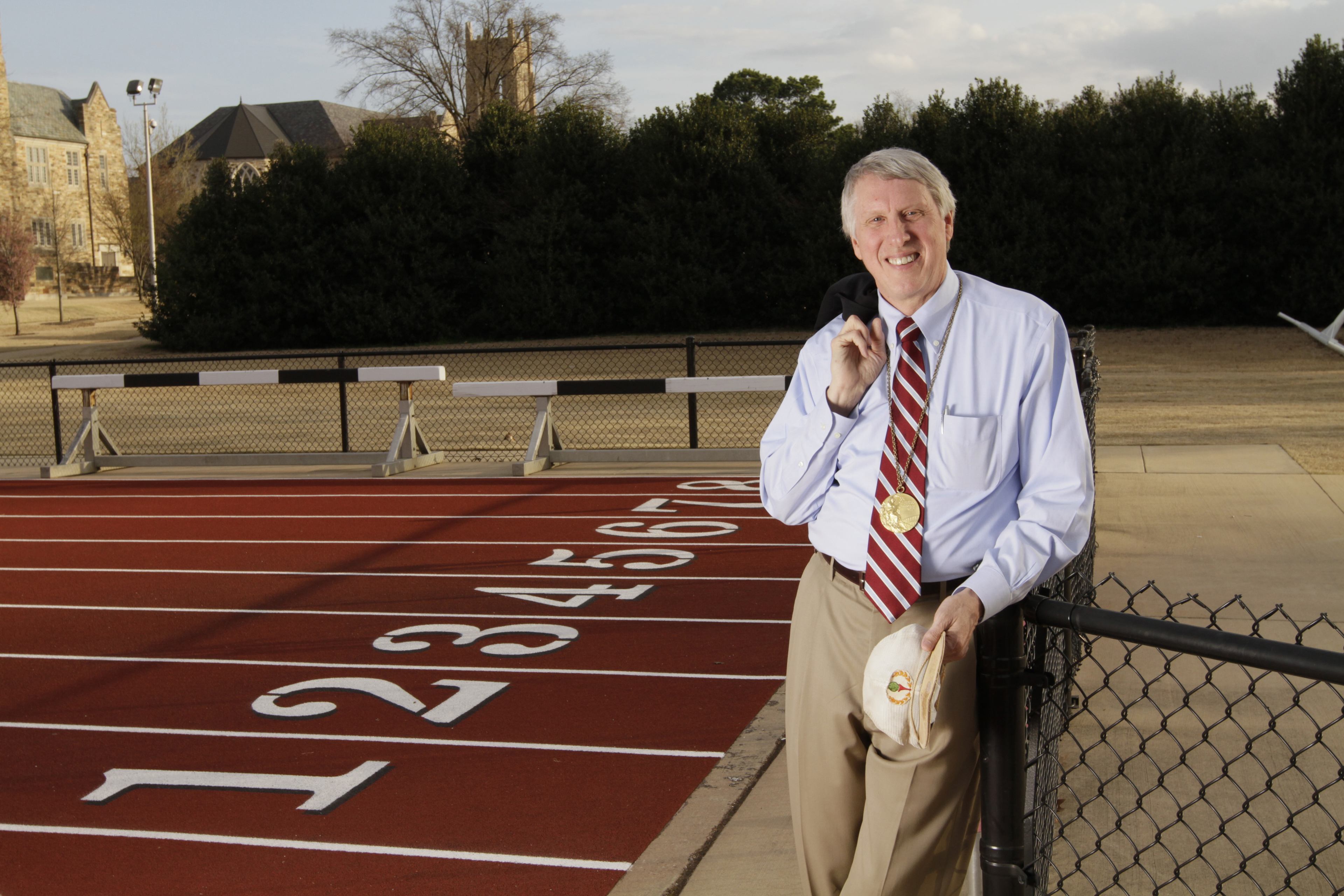 Wottle, whose legendary comeback netted him the gold medal in the 800-meter race in Munich, will kick off Freddie & Frieda 5K and hold a meet and greet on Sept. 17

For most of his athletic life up until the spring of 1972, Wottle considered himself to be a ‘miler’ – so in Olympic settings, the 1,500-meter race was the event that captured most of his attention.

It wasn’t until Wottle came to Bowling Green State University that he found his way into the event in which he would become a world champion.

Wottle, who won gold in the 800 at the 1972 Olympic Games in Munich while he was a student at BGSU, will return to campus in celebration of the University’s 100th Homecoming and the 50th anniversary of his Olympic win.

Wottle, who was known for wearing a white cap during his races, will officially kick off the Freddie & Frieda 5K at 8:30 a.m. on Sept. 17. At 11 a.m., Wottle will be present in the Bowen-Thompson Quadrangle for a meet-and-greet open to the public, during which a limited number of white caps celebrating his gold medal anniversary will be distributed. 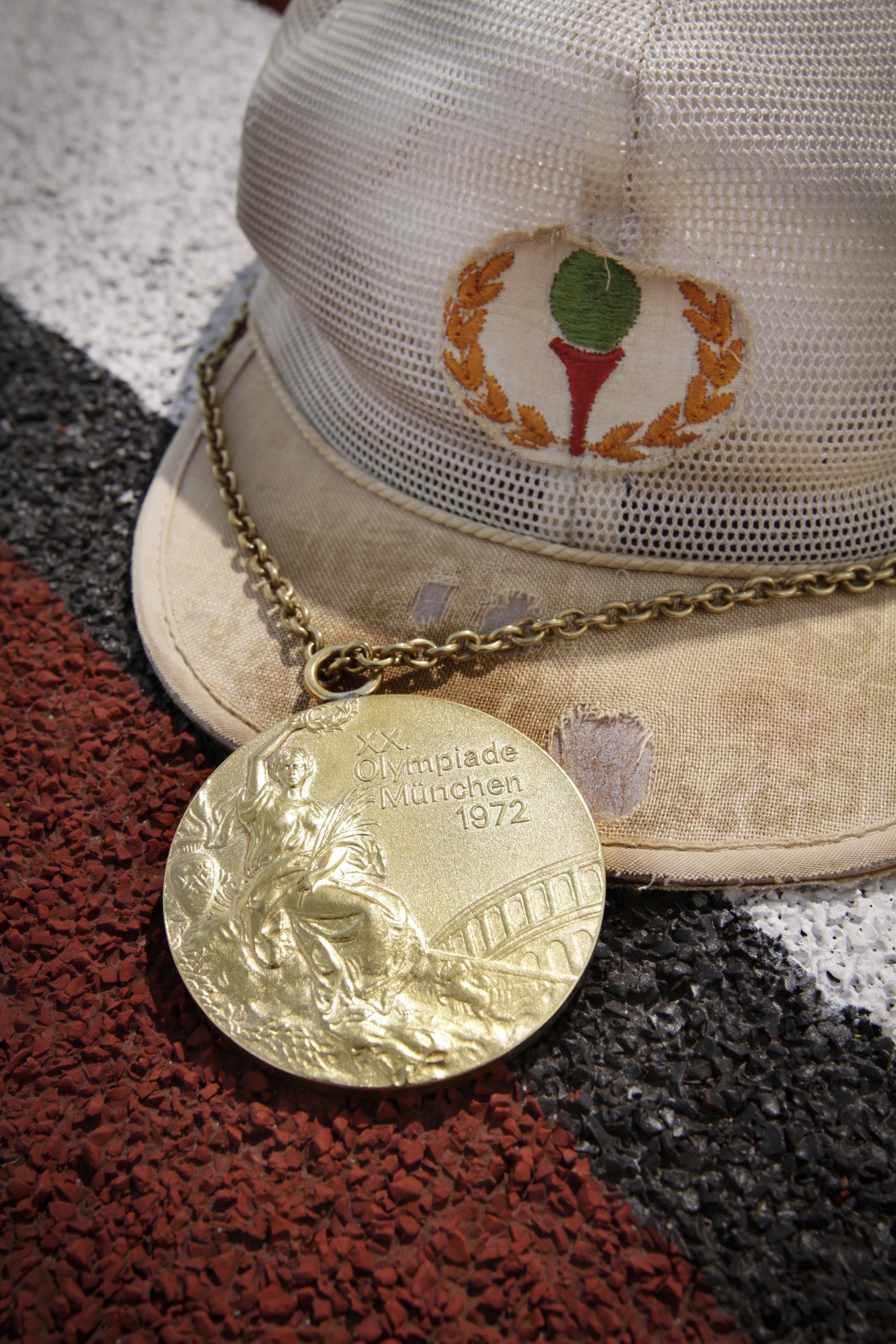 Dave Wottle '73 was known for donning a white golf cap during his races.

For Wottle, BGSU remains a special place where he made lifelong friends, obtained a degree and refined his athletic prowess all at the same time.

“The synergy that I developed during those four years in Bowling Green was exactly what I needed to achieve what I did,” Wottle said.

During Wottle’s tenure at BGSU, the Falcons had one of the top running programs in the country, but Wottle nearly missed being part of the golden era. In the fall of 1968, Wottle was already enrolled at what was then called Mount Union College.

“I had a room, a roommate, all my courses were scheduled – everything,” Wottle said. “But two weeks before I was scheduled to go, I got cold feet.”

Wottle saw Mount Union’s school record for a mile was just a few seconds faster than his personal record in high school and thought he might break it by the end of his freshman year. Plus, he liked the pacing of the education degree at BGSU better.

Additionally, BGSU and legendary track coach Mel Brodt had shown interest in Wottle from the beginning, and the Falcons had the makings of a great team with the likes of Sid Sink, who was coming off being named an All-American in the steeplechase. So, after one more visit, Wottle changed his mind and decided to become a Falcon.

With the help of Brodt and his nationally ranked teammates, Wottle continued to improve every year at BGSU. But it wasn’t until between his junior and senior years at BGSU that the 800 and Wottle became forever linked.

Brodt suggested that Wottle fly to Seattle and compete in the 800 in the Amateur Athletic Union national championships in June 1972, which the pair believed would accomplish two things. First, a good time at the AAU championships would allow Wottle to qualify for U.S. Olympic Trials; second, by qualifying in the 800, Wottle would have the benefit of going to trials early and competing in high-quality races, all of which would prepare him for his “real” event, the 1,500.

The plan didn’t exactly work out that way. 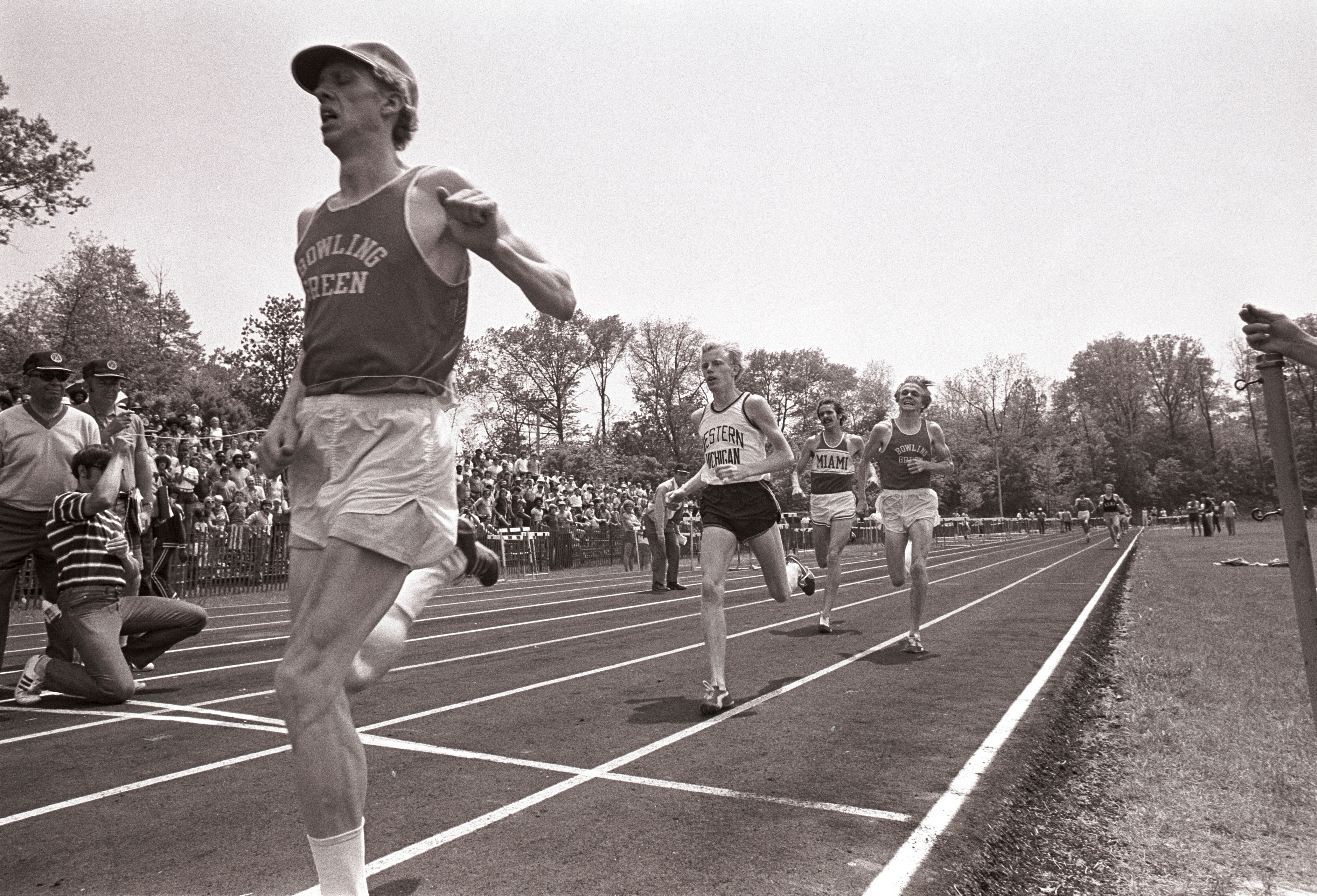 In addition to leaving a lifelong impact on BGSU as one of the University’s greatest athletes, the University likewise left Dave Wottle with experiences he cherishes to this day, he said.

Wottle won the 800 at the AAU championships, and in the U.S. Olympic Trials, he won again – and tied the world record in the process.

Despite being a notoriously difficult race to run – runners often take years learning how to strategize the intricacies of an event too long to be a sprint, but too short to be run like a distance race – the 800 became Wottle’s event overnight.

After the Olympic Trials, when sports reporters asked Wottle how he was able to run so fast, he answered honestly. He told them he had no clue.

“If you ever look back at the newspaper articles from after the Olympic Trials and see my quotes, there is a lot of me saying, ‘I have no idea how to run this race!’” Wottle said with a laugh. “I was shocked that I was able to do it.”

Months later, Wottle ran what many track enthusiasts consider to be among the great Olympic races of all time in the 800-meter final.

While Wottle had believed he did not possess the leg speed for the sprint elements of the 800, his great strength came through on a world stage. Normally, the third 200-meter section of the race is a runner’s slowest, but Wottle was able to reach and maintain his top speed for virtually the entire race, keeping his pace as the others waned.

Trailing for most of the race, Wottle stormed into the picture during the final 15 seconds, moving from fourth place into third place, then into second. In the final few meters, Wottle began creeping up on Yevhen Arzhanov, a Ukrainian selected for the Soviet Union’s team who was the heavy favorite to win.

Just as both runners strode for the finish line at the same time, Wottle inched in front. Broadcaster Jim McKay, who called the race for the American audience on ABC, shouted, “I think he did it!”

Indeed, he did: 1:45.86, three-hundredths of a second in front of Arzhanov, to claim a gold medal. 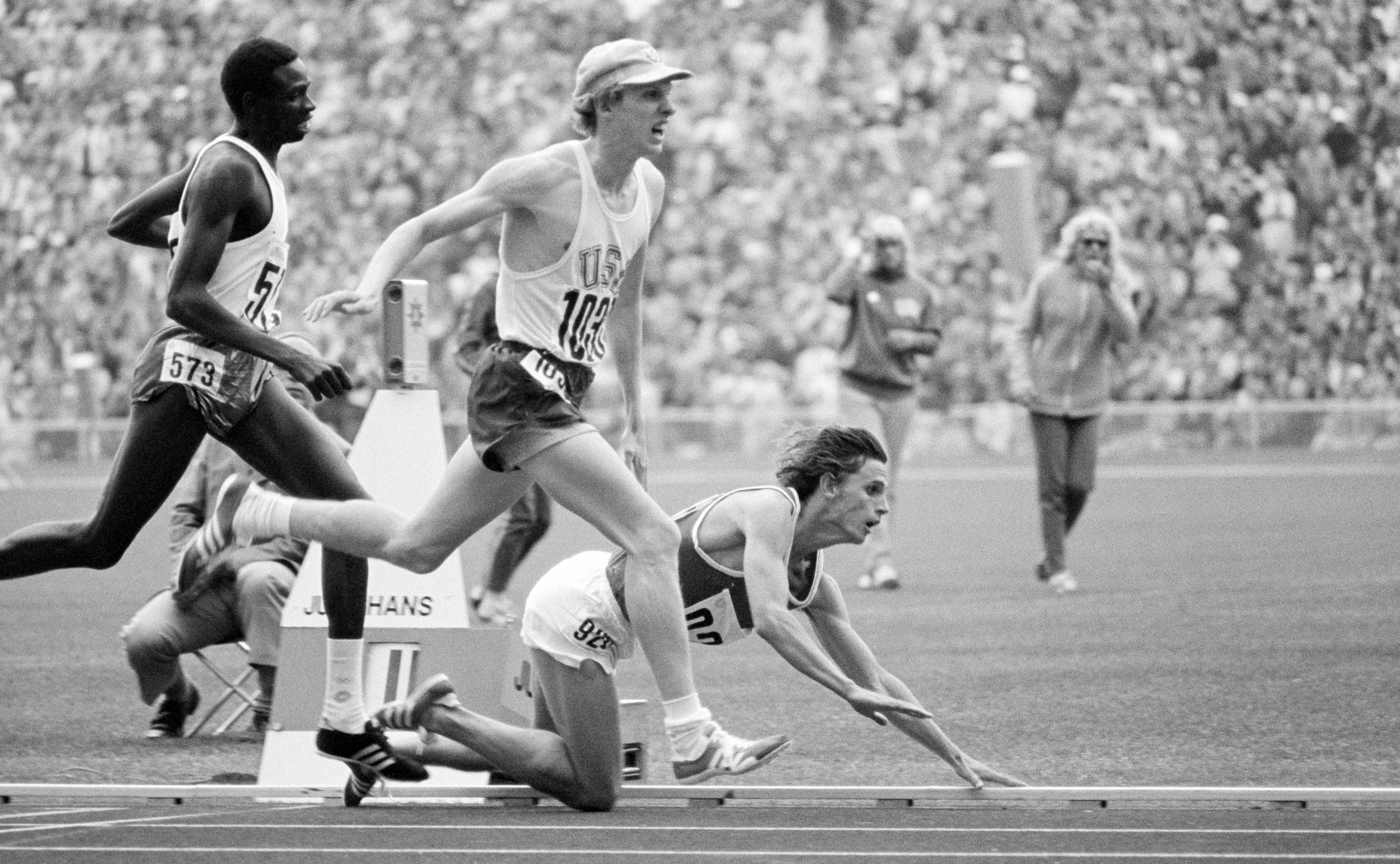 Dave Wottle (#1033) of the United States (center) en route to finishing in first place to win the gold medal in the final of the Men's 800 meters event, beating silver medallist Yevhen Arzhanov of the Soviet Union (right) who stumbles and is about to fall, and Mike Boit of Kenya (left) in bronze medal position during the 1972 Summer Olympics in Munich, West Germany on Sept. 2, 1972. (Photo by Ed Lacey/Popperfoto via Getty Images)

It was a storybook race, just months after Wottle had tied the 800-meter world record and not even realized it.

“Tying the world record in the 800 meters was just as much a shock to me as anybody else,” he said. “I never would have dreamt that I could have run that fast. In fact, I’m not even sure it registered to me what the 800-meter record even was. That was so far out of my reach that I never thought I could run that fast.”

Following his win in Munich, Wottle returned to BGSU for the fall semester of his senior year.

When Wottle came back to the U.S., he declined many appearance requests and speaking engagements, and for a good reason: He was completing his student teaching and swarmed with doing lesson plans.

An education major, Wottle was placed in Ethel Hayhurst’s history class at Bowling Green High School. Wottle said the experience of going from the high of winning Olympic gold to a novice teacher is one for which he remains grateful to this day.

Wottle said the experience of working alongside Hayhurst as a novice learning a new profession grounded him.

“It was interesting because as soon as I got back from Munich, classes started at BGSU and I was student-teaching,” Wottle said. “I always kid around and say that I’m not sure she ever knew I won a gold medal because she worked my butt off. It was a blessing in disguise. She made sure I wasn’t standing on any pedestal and got me grounded very well.

“I look back at that now and I really look at that as a blessing.”

Wottle spent most of his career in higher education administration, including 29 years at Rhodes College in Memphis, Tennessee, from which he retired in 2012.

In addition to leaving a lifelong impact on BGSU as one of the University’s greatest athletes, the University likewise left Wottle with an experience he cherishes to this day.

Wottle’s teammates remain some of his closest friends, and he regularly corresponds with fellow Falcons like Sink, Steve Danforth, Bob McOmber and Rick Schnittker, who was the best man at Wottle's wedding.

Fifty years after his senior year at BGSU, Wottle said still he cherishes the friendships he made as a college student.

“I had a group of guys there that were like my brothers. I never joined a fraternity because I didn’t need to,” Wottle said. “Fifty years later, we’re still very close, which means a lot to me and I know means a lot to them.”

For someone who reached the pinnacle of the athletic world, Wottle said his decision to come to BGSU was the perfect choice at the perfect time.

“I really felt I got a great balance of academics and athletics,” he said. “I loved my time as a student at BGSU.” 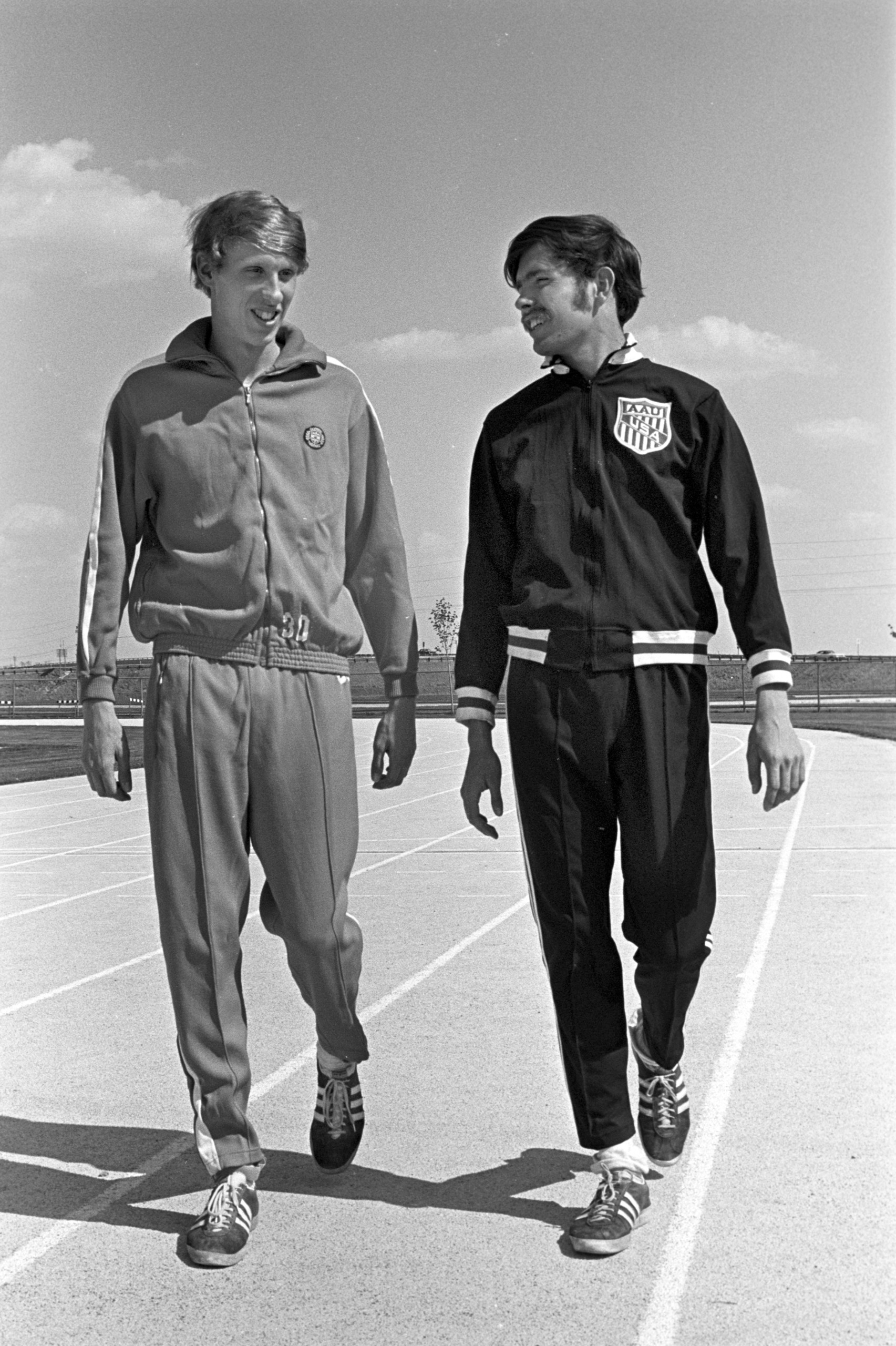 BGSU track stars Dave Wottle and Sid Sink walk and talk on the track in 1971.