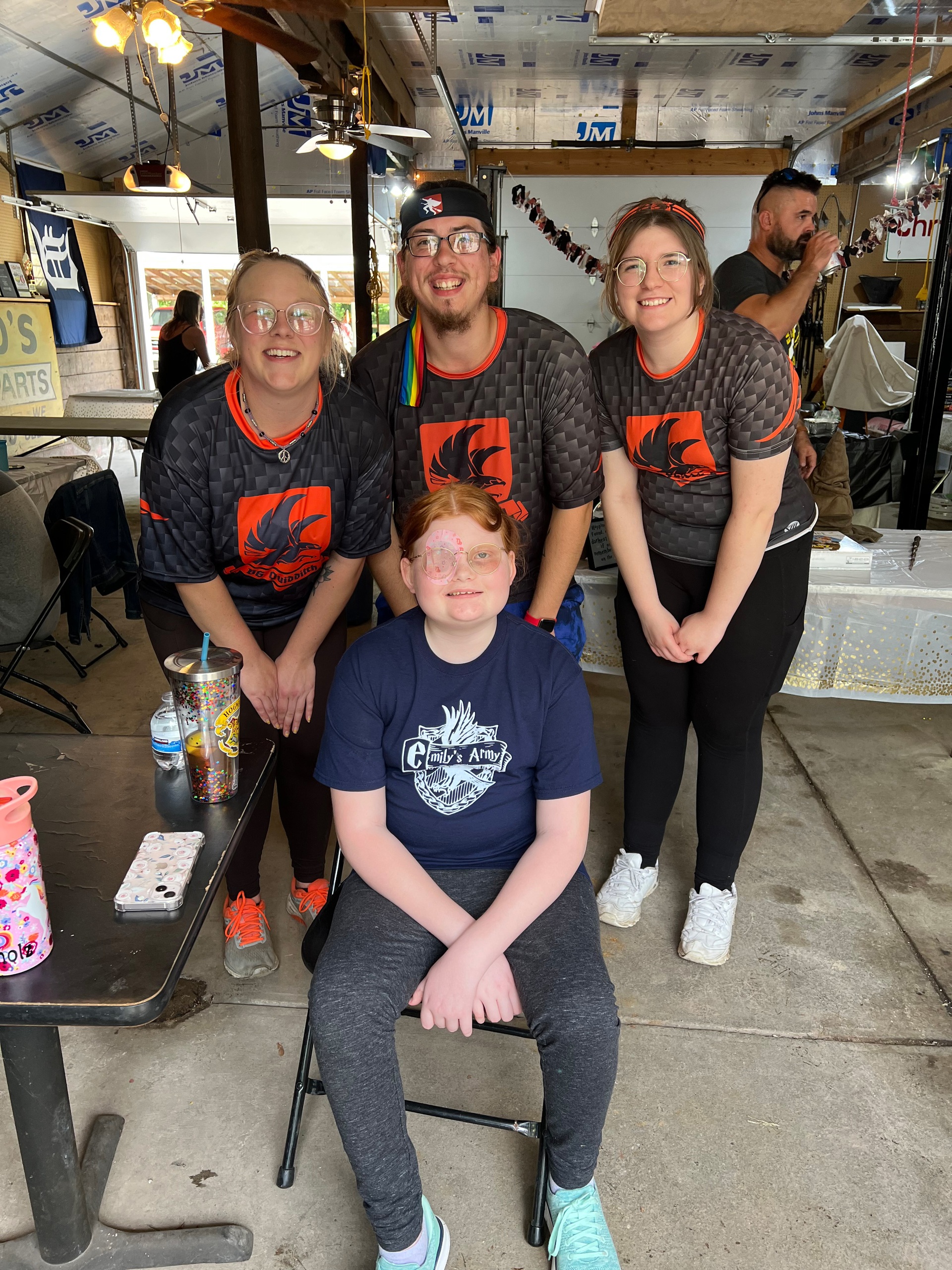 Members of the BGSU Quidditch team surprised 11-year-old Emily Scholz at a party marking the end of her radiation treatments for DIPG, a rare form of brain cancer.

When 11-year-old Emily Scholz completed radiation, a celebration was in order.

Deciding on a theme for the surprise party, however, was the easy part.

“She’s a big reader, and Harry Potter is the one franchise she has fallen head-over-heels for,” said Emily’s mother, Sarah Carnes. “She’s read all of them many times over and we’ve seen all the movies.”

Emily was undergoing chemotherapy after being diagnosed with diffuse intrinsic pontine glioma (DIPG), an uncommon and currently incurable form of brain cancer that begins in the brain stem and occurs mostly in children.

The treatment required drives to and from the family’s Monclova, Ohio, home to Ann Arbor, Michigan, every weekday in addition to other appointments. So to celebrate the end of a difficult chapter, family, friends and well-wishers began to plan a Harry Potter-themed celebration for Emily.

The idea brought party organizers directly to a group of Bowling Green State University students whose club sport fits the theme to a ‘T’. The BGSU Quidditch team plays a live-action, competitive version of the fictional game described in the J.K. Rowling series, so when asked about Emily’s party, the club jumped into action.

An email chain later, BGSU Quidditch players were headed out to the surprise party to set up hoops, bring their equipment and serve as guides for anyone who wanted to learn about the sport, or even try it out.

Raeann Barnes ’22, who graduated as a double major in film production and digital arts and was the BGSU team captain last school year, said the group felt a personal connection with Emily’s party and the cause behind it.

“It meant a lot to me because I was really, really interested in Harry Potter when I was her age, so I got attached to it because I wanted to give her something special,” Barnes said. “We didn’t have the numbers (for a full game), but we had the equipment and I wanted to do something to make her day a little brighter.”

The BGSU Quidditch team also gave Emily a book commemorating 10 years of Quidditch that they had won at this year’s national competition in Salt Lake City.

Though the event took place during the summer, when most students are not on campus, the team saw a chance to use their sport for an act of public good.

“It was just something fun that we were able to do for Emily, and we got a chance to share the sport of Quidditch,” said Rob Beaton, a senior studying Visual Communications Technology who is a member of the team. “There were probably about 100 guests there, and we had so many people coming up to us and asking about the rules and what kind of game it was. They were really intrigued by it and thought it was so fun to watch, and Emily loved it, which was great to see.”

The willingness of so many people to offer their time and support for Emily has been a heart-warming experience, Sarah said.

“It’s just been such an amazing outreach of support from anybody who has heard about this, which has been wonderful,” she said. “That’s what gets us through every day.”