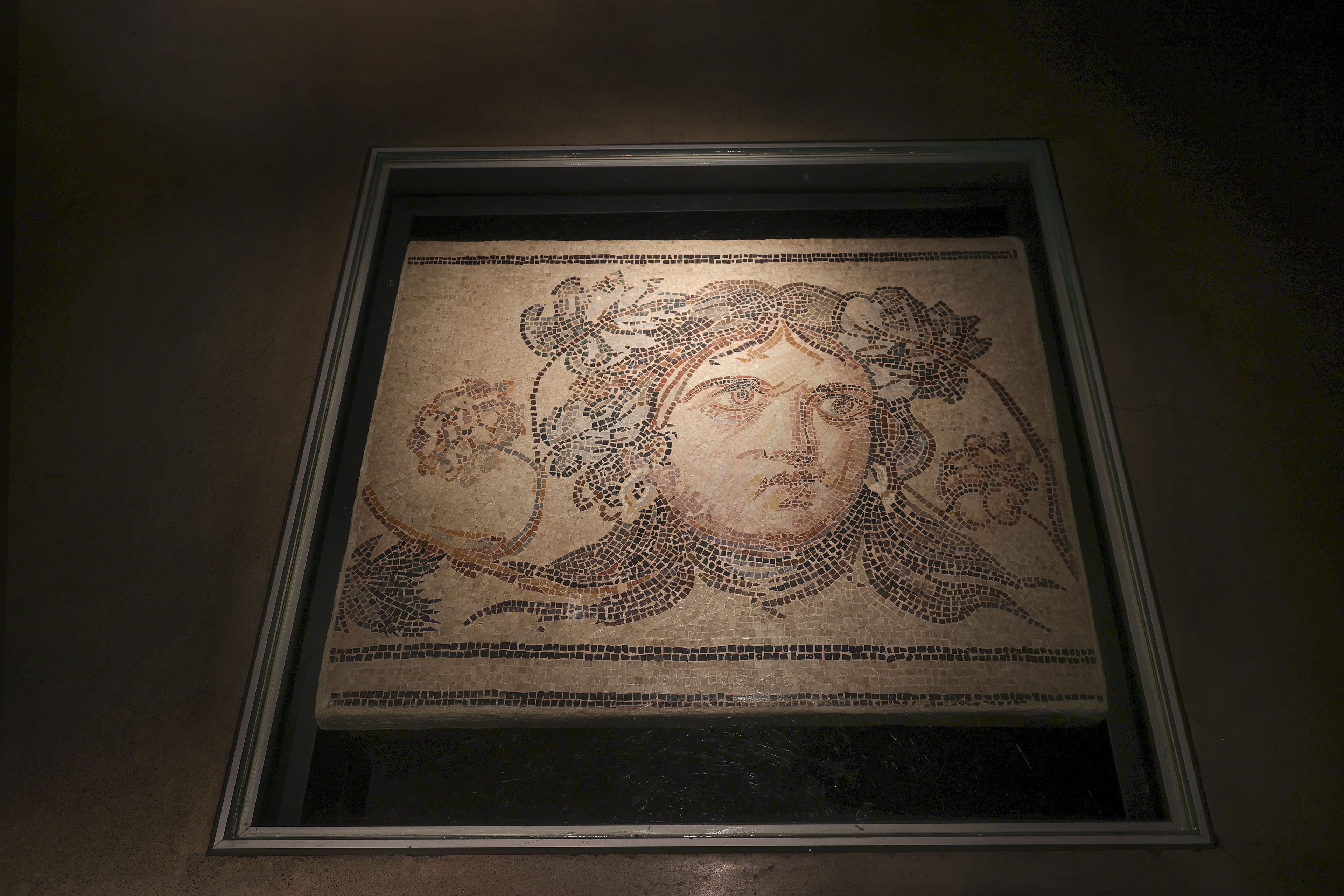 Back at BGSU: Ancient mosaic tiles return, as replicas

Bowling Green State University has welcomed back the Gypsy Girl, Dionysus, the god of festivity and theater, and 10 additional mosaic tiles from the Turkish government.

The 12 mosaic tiles are replicas of the original ancient tiles the University acquired in 1965 that were later determined to have been part of an unauthorized excavation, and rightfully returned to the Republic of Turkey in November 2018.

In recognition of the University's commitment to the stewardship of cultural history and vitality, Turkish officials agreed to provide replicas of the mosaic fragments as part of the negotiations when BGSU returned the original tiles.

On June 3, the University hosted the Turkish Consulate General of Chicago, Engin Türesin, for a special ceremony to recognize the arrival of the replicas, which have been installed at the Wolfe Center for the Arts, where the originals had been on display from 2011-2018.

"As a public university, our obligation to create good and steward cultural vitality extends to a global community," said BGSU President Rodney K. Rogers. "We are grateful to the Republic of Turkey for the collaboration in the permanent installation of the ancient mosaic tile replicas, representing our original intent of connecting significant cultural heritage to the present.” 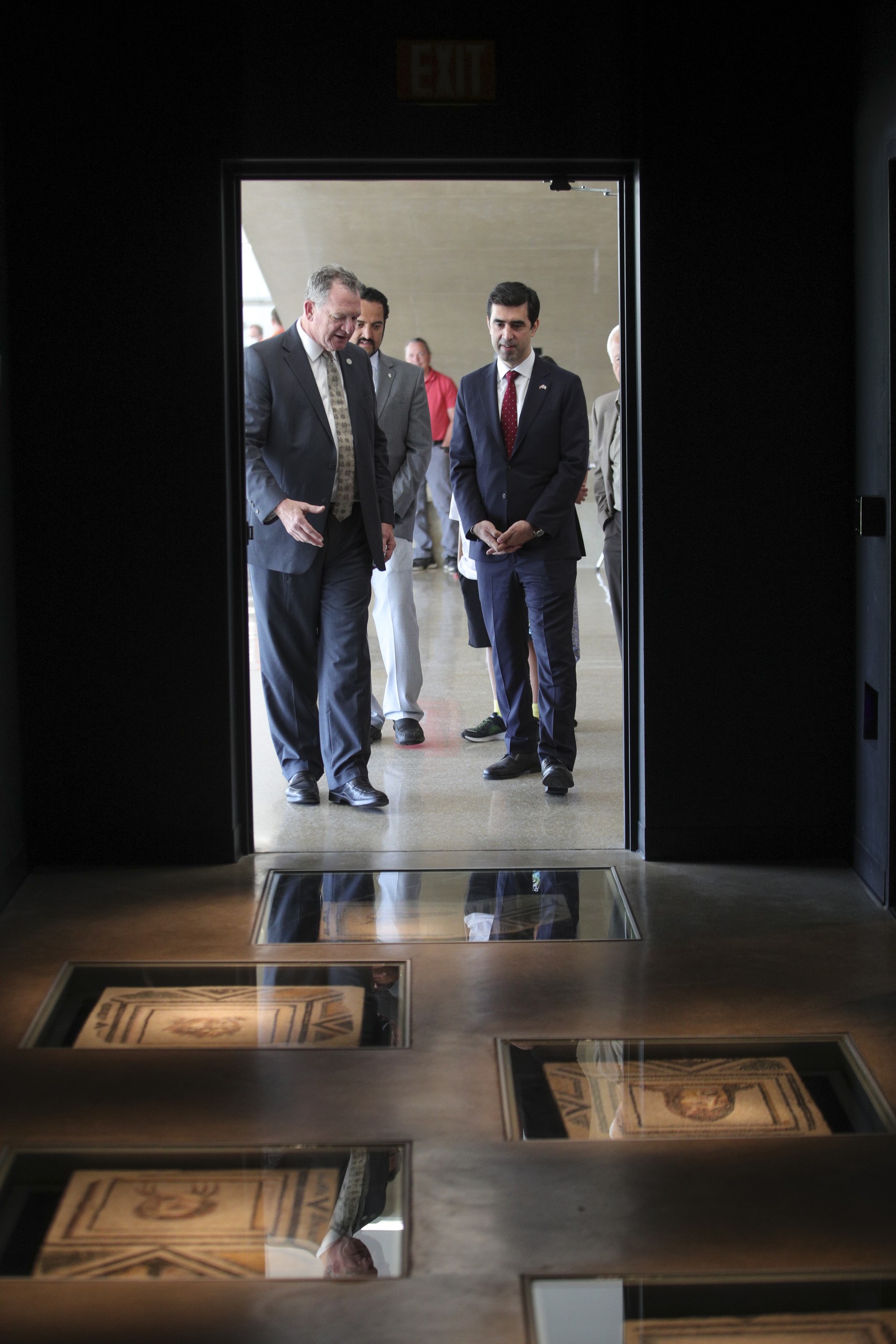 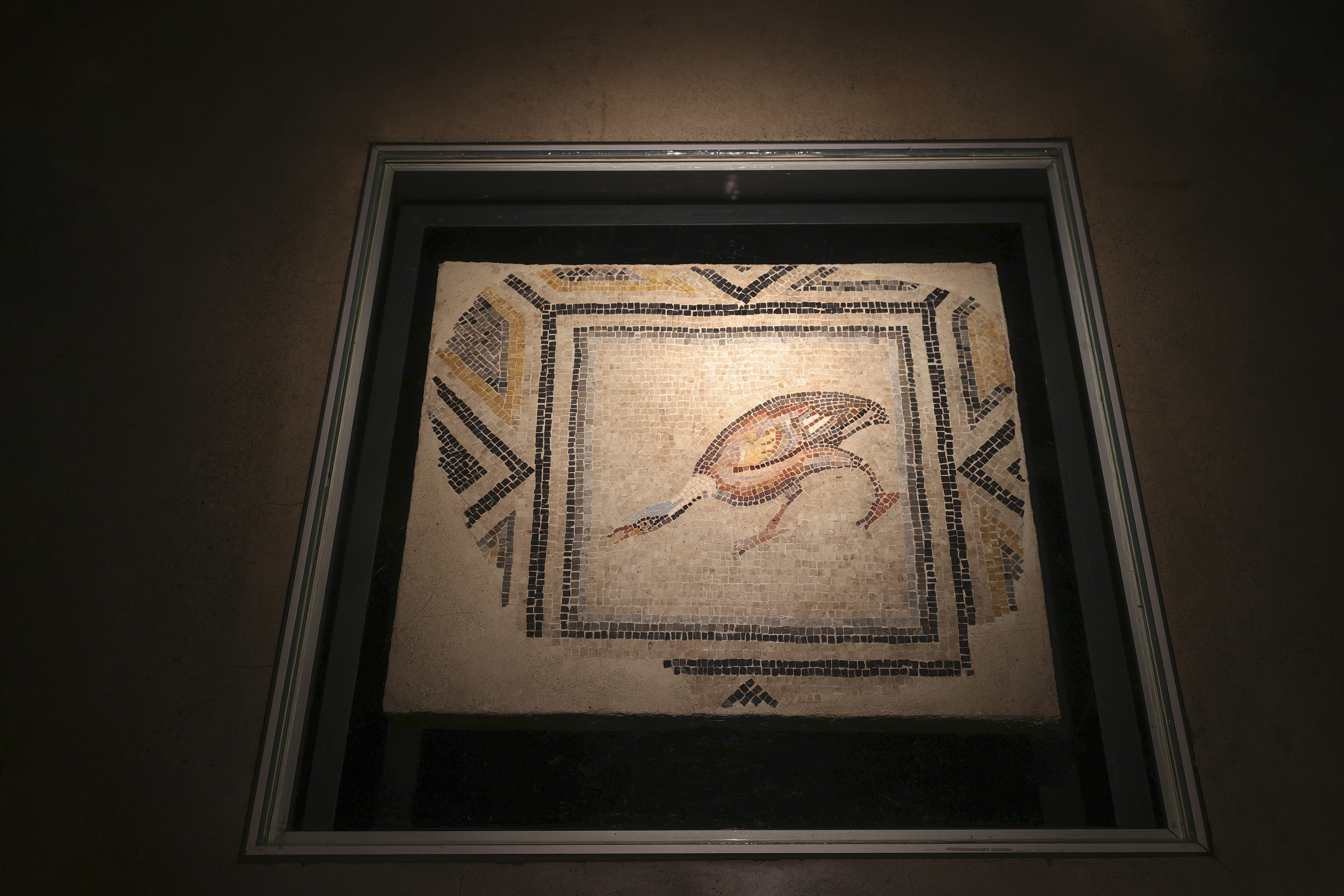 In 1965, under the leadership of then-President William Jerome III, BGSU was beginning an era of major expansion in buildings, programs and cultural expressions.

“One result of our rapid growth is a tendency to become so absorbed by contemporary architecture and design that a feeling of relationship with the past is lost,” Jerome said about the University’s decision to display the mosaic tiles on campus.

The mosaics represented the importance of cultural heritage within the academy. Jerome and faculty in the BGSU School of Art acquired the mosaics for about $35,000 from Peter Marks of the Peter Marks Works of Art gallery in New York. At the time, the acquisition was made in compliance with the law and in good faith. 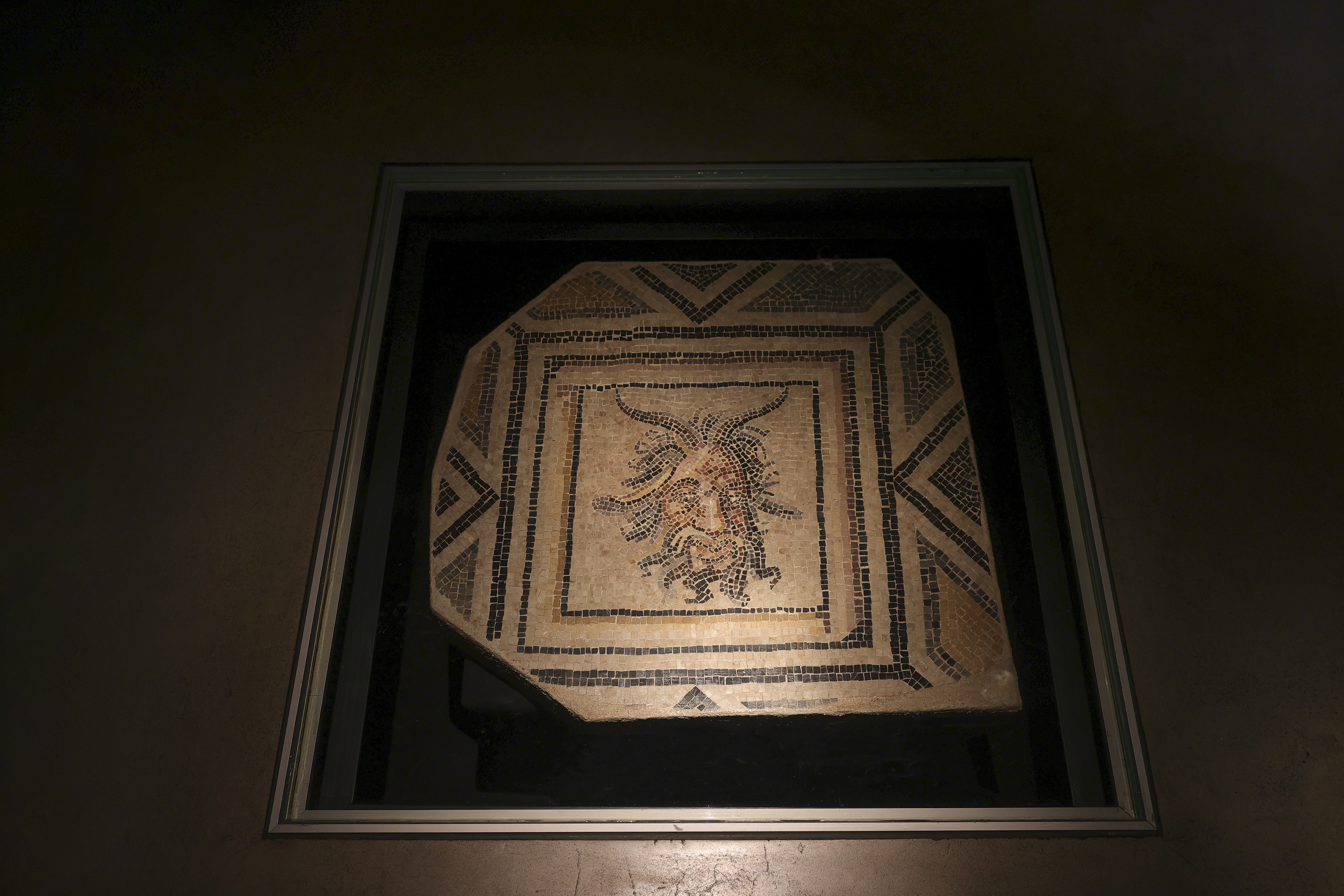 For more than 50 years, the preservation and care of the mosaics was a priority for BGSU. When the Wolfe Center was built in 2011, the mosaics were restored and protected under air-tight glass in the lobby of the Eva Marie Saint Theatre. 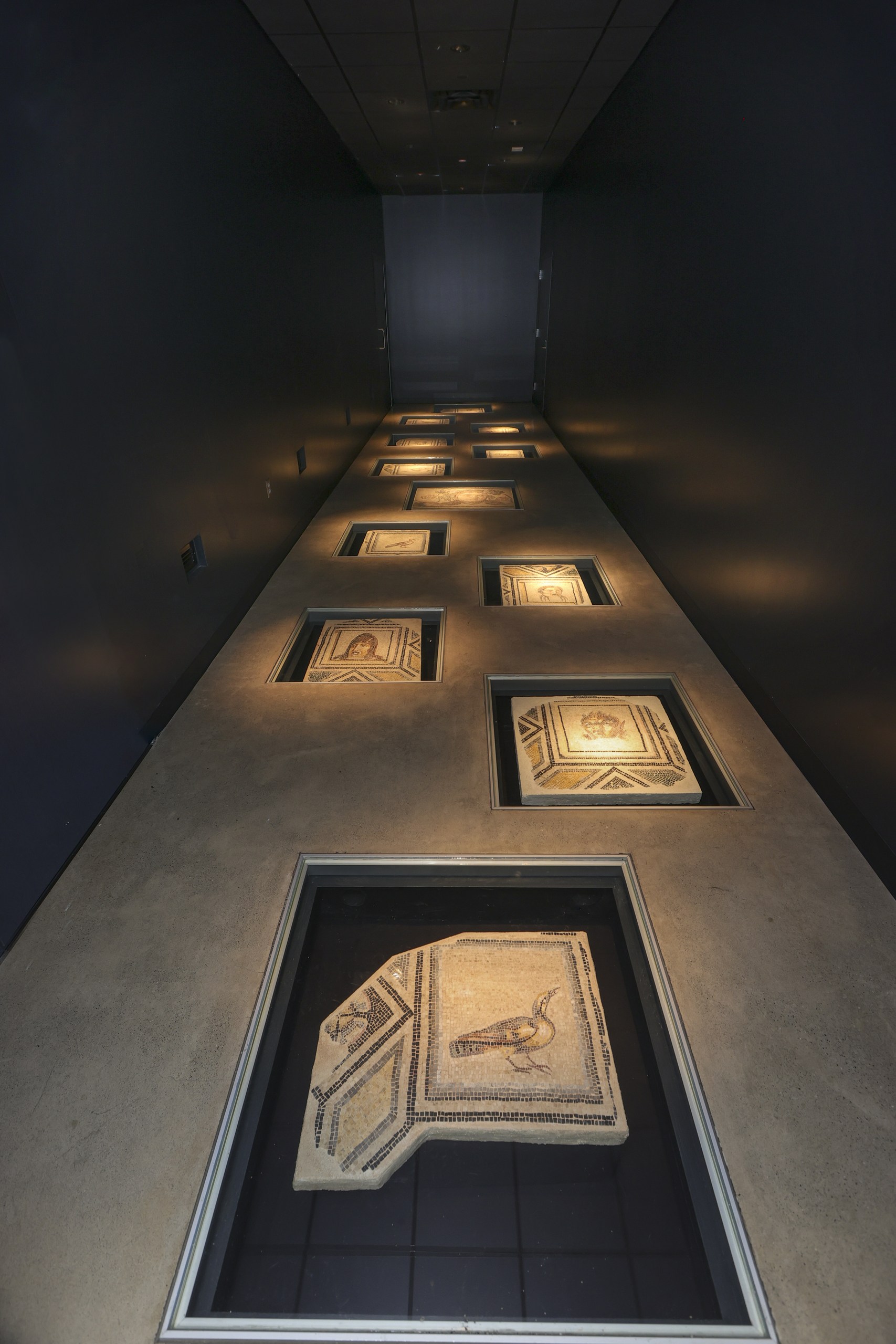 …Or so we thought

When the mosaics were purchased, they were thought to be from a second or third-century A.D. building in the city of Antioch, modern-day Turkey. In 2012, research by then-BGSU faculty member Dr. Stephanie Langin-Hooper and Dr. Rebecca Molholt of Brown University raised questions about the origin of the mosaics and the circumstances of their excavation prior to BGSU’s acquisition. They suggested the mosaics were likely from the ancient city of Zeugma, also in Turkey.

According to Langin-Hooper, who is now an assistant professor and Karl Kilinski II Endowed Chair of Hellenic Visual Culture at Southern Methodist University, the roughly 2,000-year-old mosaics were from a wealthy Roman family’s home in Zeugma, near the banks of the Euphrates. Their luxurious villa featured intricately tiled mosaic floors throughout, with designs chosen from a pattern book but custom created to be one-of-a-kind. For their dining room, the family chose themes appropriate to the lavish dinner parties they planned to host. The floor mosaics featured theater masks; faces of the Maenads, the followers of the god of wine; and colorful, exotic birds that might have been living nearby.

The Roman-era stone and glass pieces were buried over time before they were “wrenched from their concrete substrate” through unauthorized excavation and eventually sold on the international antiquities market, Langin-Hooper said.

Additional research and consultation with scholars, art experts and representatives from the Republic of Turkey confirmed the mosaics had similarities in the color spectrum, depictions and frameworks of those in Zeugma.

After the origin and history of the mosaics were confirmed, BGSU and Turkish government officials worked together to finalize plans for the return of the mosaics to the Republic of Turkey. 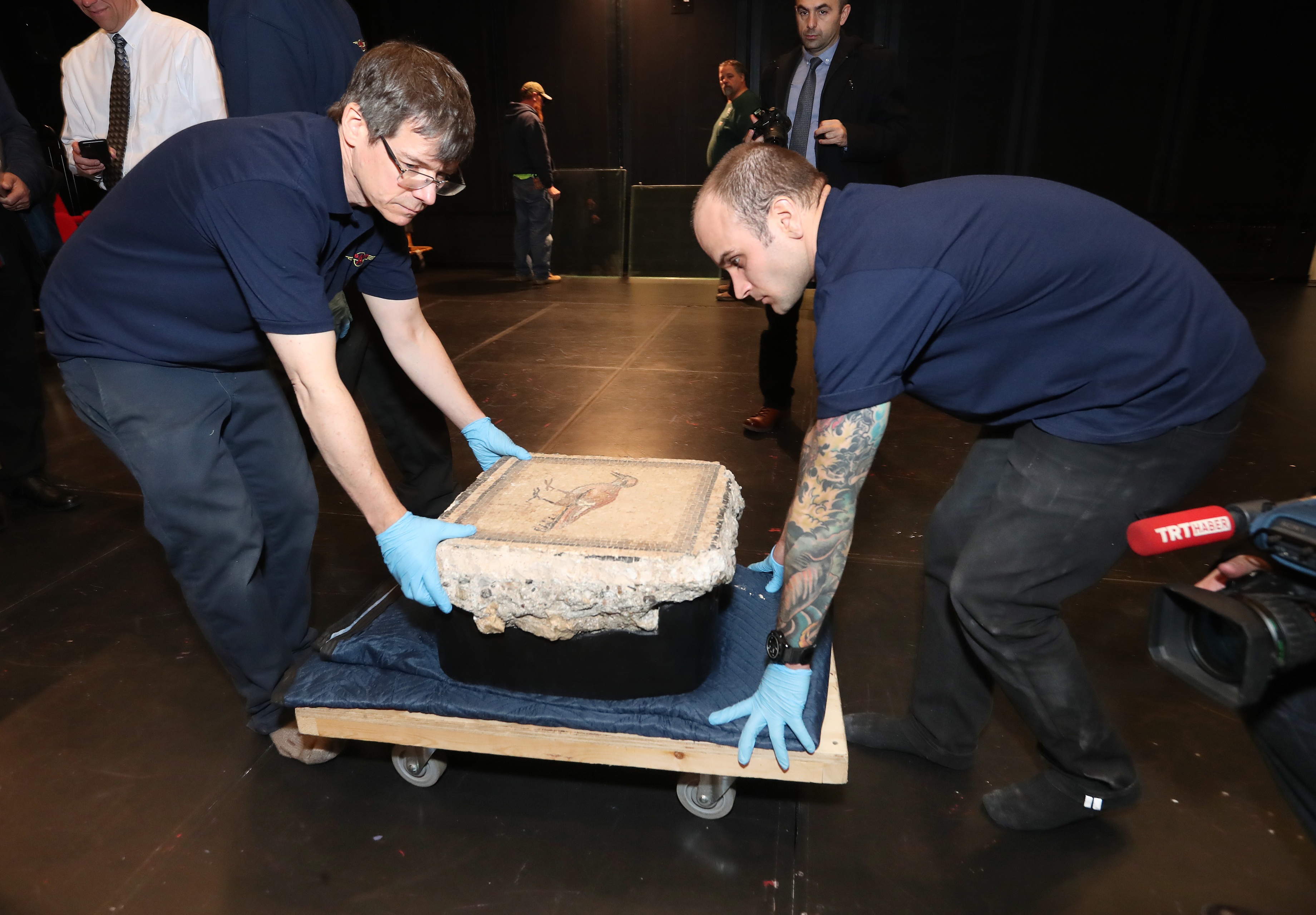 On Nov. 18, 2018, BGSU hosted a press conference with state and Turkish officials to celebrate the official triumph of the mosaics going home. The 12 mosaics were crated and sent to the world-renowned Zeugma Mosaic Museum in Gaziantep, where they are on permanent display. 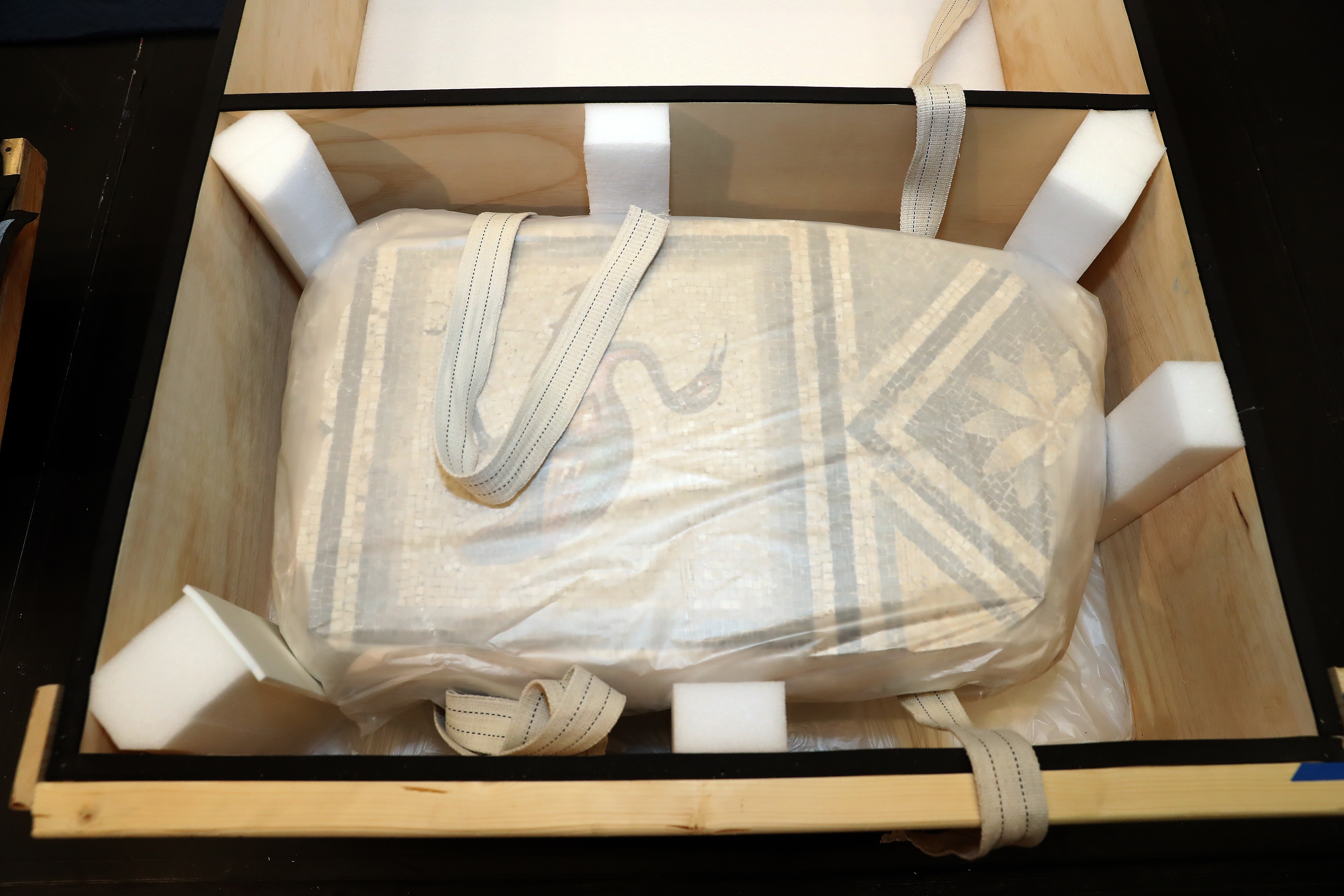