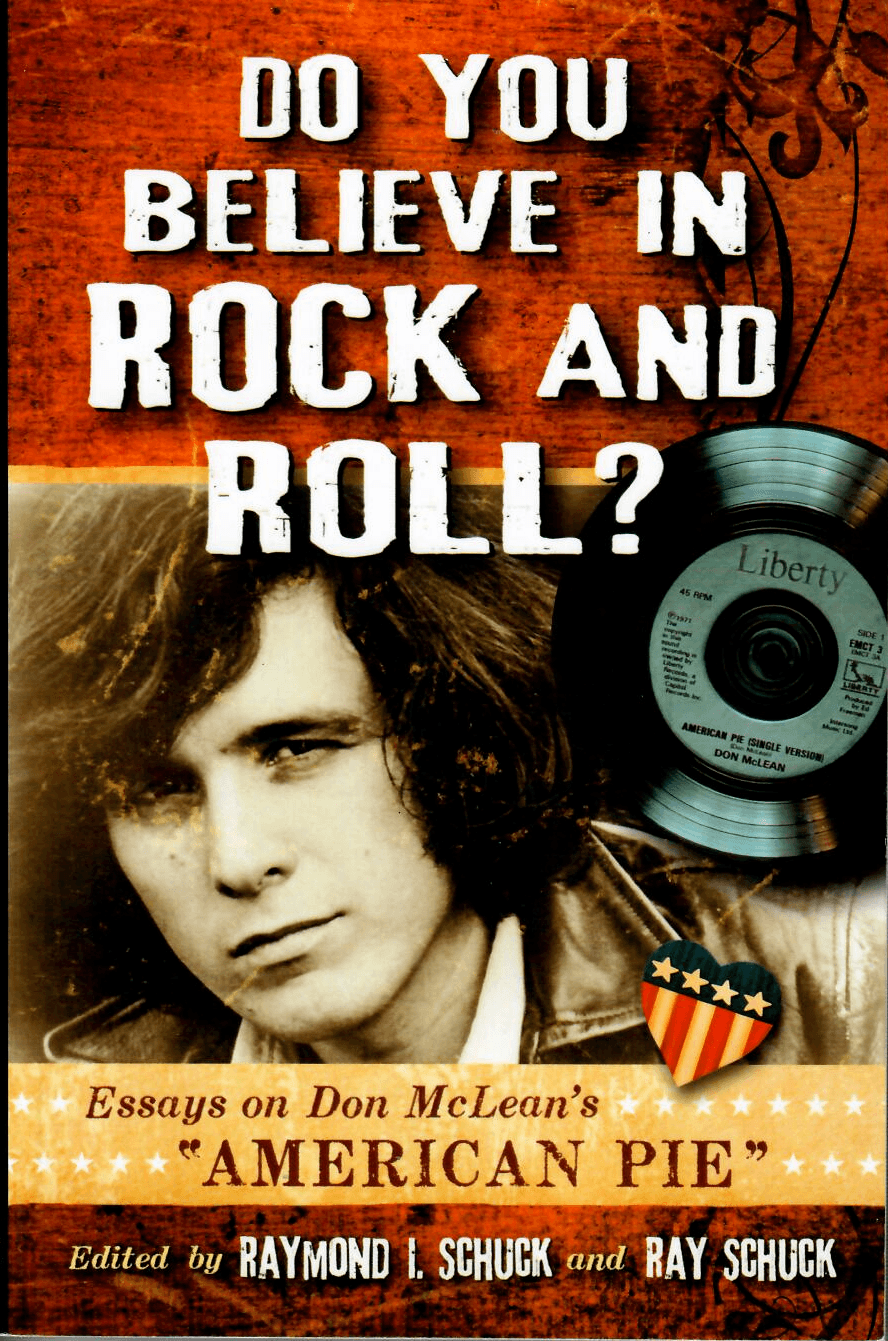 There are love songs, and there are anthems. There are hot hits, and golden oldies. And then there is "American Pie".

The iconic 1971 ballad that was written and recorded by Don McLean became a treasured piece of Americana that was filled with poignant connections to the troubles of the day, some direct and many others cloaked in ambiguity. The meaning of some of these veiled references has been debated intensely during the 50 years since “American Pie” spent a month as the No. 1 song in the U.S. in January 1972.

As that anniversary approaches, BGSU Firelands professor of communications Dr. Raymond Schuck could sense that the buzz over the much-celebrated piece would rekindle.

“Every few years it seems like something happens and brings the song back to the forefront of discussion,” he said. “There is just so much in there. Don McLean wrote something that was not made up of your standard lyrics — there is a lot of symbolism in the song. It clearly took him time to compose this song and capture so much in the lyrics, and you can go off on countless tangents trying to figure it all out.”

'Do You Believe in Rock and Roll?'

In 2012, Schuck and his father, Ray – a professor of history at Ohio Northern University – took that very adventure, probing the depths and intricacies of “American Pie” and its role as a parable of troubled times. The duo published a book called “Do You Believe in Rock and Roll,” a collection of eight scholarly essays that was a creative dissection and exploration of McLean's cryptic lyrics.

“The more you looked around, the more you saw references to the song and McLean's lyrics,” said Schuck, citing dialogue in television shows that mentioned the song, and other real-life ties. As his father taught public history courses, songs with social meaning were part of the curriculum and questions about the deeper connections woven throughout “American Pie” inevitably came up during discussions.

“He would play it and then look at what McLean was trying to do and trying to say with this song," Schuck said. "My questions were more from a popular culture angle: What does this song mean to society? We saw it as a very entertaining song, but also one that could benefit from a scholarly examination and have a prominent place in our classrooms.”

Schuck said their book was meant to be entertaining enough that people would read it and enjoy it, but also serve an educational role.

“At the same time, absolutely, it is a scholarly book, so these are essays that could and, we hope, will be used in classrooms,” he said.

The search for meaning

Besides its multiple connections to “The Day the Music Died” that was a clear reference to the 1959 plane crash that took the lives of rock and roll stars Buddy Holly, Richie Valens and The Big Bopper, the song also steps into more shrouded lyrics about “bad news on the doorstep,” a “widowed bride,” “helter skelter” and “Satan laughing with delight".

Schuck, who also serves as the chair of the Department of Humanities at Firelands, said the mysteries behind the lyrics took on lives of their own throughout the decades, as McLean declined to shed much light on what the lines in the song meant.

“Although there are some very clear parts, like the plane crash reference, Don McLean has always been very coy about the whole thing and what he was attempting to say in the song,” Dr. Schuck said. “He has embraced the mystery and the dialogue, rather than make it definitive.

“But with the way it has captured the interest of so many people over the years, you start to see how this has become a significant piece of American culture. 'American Pie' helped define a generation of Baby Boomers.”

For nearly 50 years, the song had the longest run-time of any song to make the Billboard Hot 100 list at eight minutes and 42 seconds, until Taylor Swift's 10-minute version of “All Too Well” broke the record in December 2021.

Schuck happily acknowledges that while his book contains eight essays on various interpretations of “American Pie,” there are likely countless other explanations of the rock saga. He anticipates seeing the discussion hit another high note and hopes that his book contributes additional in-depth perspectives on the song.

“It's exciting, and it puts the song and our book back out there,” he said. “It was a joy working on the book with my father and seeing how we came at it from different perspectives. He's a Baby Boomer, so it meant certain things to him, and since I'm from a different generation, I had different cultural touch points.”

“American Pie” gained fame and popularity across the world when it was first released, and to celebrate the song's 50th anniversary, McLean has scheduled a 35-date tour through Europe for 2022.

“I think the 50th anniversary of its extended time at No. 1 in January will just energize things again, and not every song gets that kind of reaction,” Schuck said.