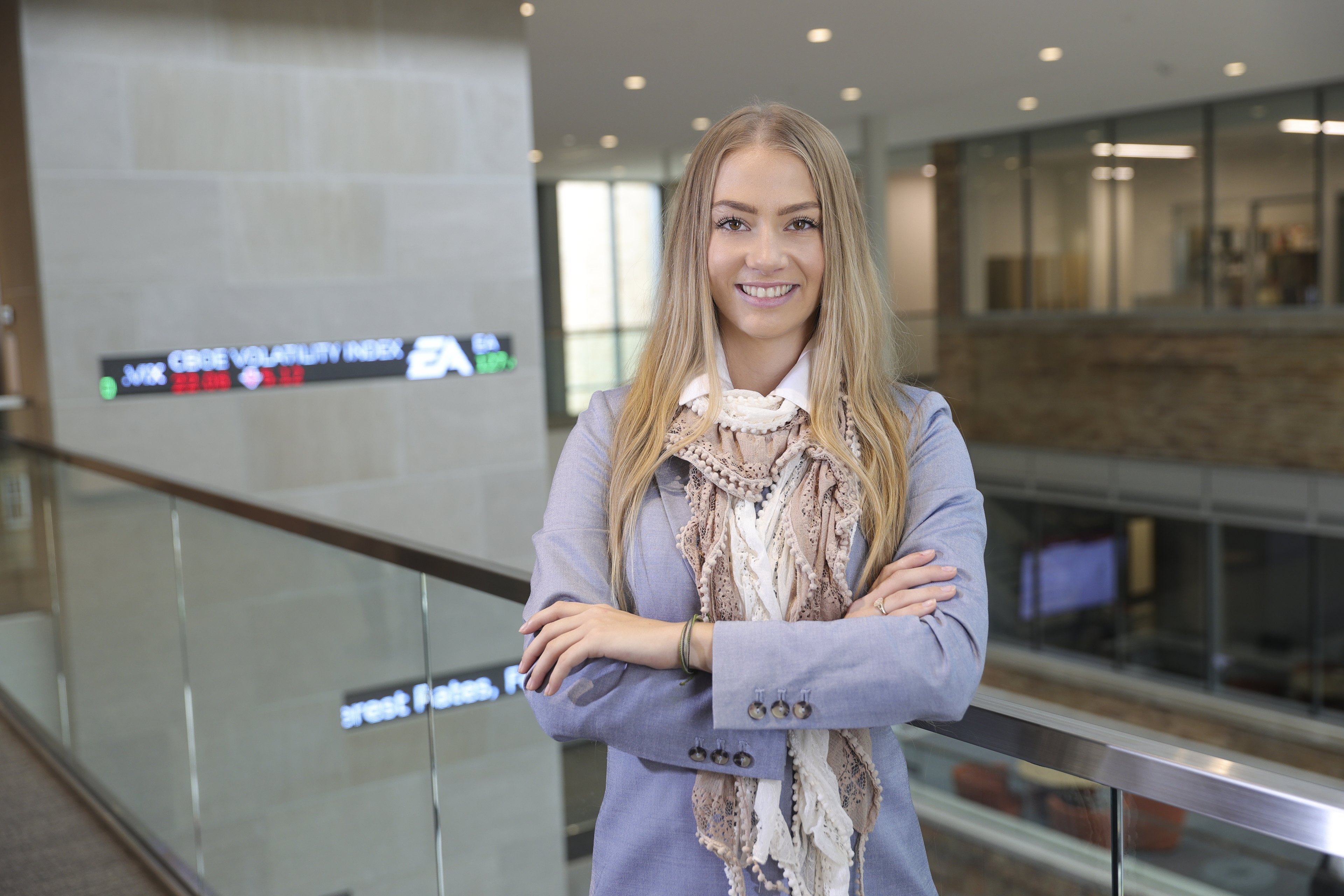 Caption: Dagmar Chapin graduated from the Schmidthorst College of Business as a triple major. She accepted a job with Gartner before graduation and plans to move to Dallas in the coming weeks.

Once Dagmar Chapin chose to attend Bowling Green State University, she figured she ought to make the most of her time here — and wasted no time doing so.

After earning her associate’s degree while at Buckeye High School in Medina, Ohio, and enrolling at BGSU, she had been on campus for just a couple weeks when she wandered to the Student Organization Fair and saw a giant globe that caught her eye. The globe represented BGSU’s Education Abroad program, which Chapin learned included a yearlong exchange program.

She said, "Why not?" and within a week was signed up for a life-changing experience that already has proved valuable on the job market.

As part of her education at BGSU, Chapin completed a one-year, dual-degree Bachelor of Arts in European Management in Strasbourg, France. It is one example of many during college that she pushed herself to step out of her comfort zone, only to have a rewarding experience as a result.

Chapin also graduated from the Allen W. and Carol M. Schmidthorst College of Business as a BGSU triple major in sales, marketing, and international business. She chose from a host of pre-graduation job offers to accept a position as a Dallas-based global technology sales account manager at Gartner that will begin next month.

She joked that she couldn’t pick one area to study, so she just picked all of them, but said her time at BGSU showed her the value of being ambitious and taking chances on something new.

“I’m a firm believer in taking opportunities as they come,” she said. “I never knew that I was going to live in France for a year and travel all over Europe and meet my best friends there. I never knew I could pull off taking three majors when I originally didn’t even want to go to college. I never knew I’d graduate with honors and a high GPA.

“I picked as I went, and I’m really thankful that it paid off.”

Living in a new country without being fluent in the native language provided a series of adventures for Chapin — a treasure hunt for new shampoo ended successfully thanks to a helpful French grocer – but also gave Chapin both cherished lifelong memories and a clear idea of what she wants for her career.

Though the experience of going alone to a new place felt overwhelming at times and the coursework was challenging, she said she couldn’t be happier that she went through with the program.

“On my first day, they made us all stand up and give a presentation about ourselves for 30 minutes, and I’m like, ‘Oh my God, how am I going to talk about myself for 30 minutes?’” she said. “As the 30 minutes went on, I kept getting more comfortable, and that’s how a lot of the classes were. It wasn’t just about taking this exam and getting an ‘A’ on your tests, but also about interacting with your peers and learning how differences among multiple ethnic cultures work in a business sense.”

After the experience, Chapin said she saw herself in a new light. She previously had been apprehensive to speak in front of large groups or see herself in a leadership role, but said she returned to the United States ready to take on just about anything in the business world.

Chapin left with a keen awareness that she wants to travel the world through international business during her career, and sought employers who could make that happen.

“I just think every time I said yes to an opportunity or yes to something that made me nervous, I always came out on top or learned something from the challenge,” she said. “It might sound corny to say, but I was always comfortable with being uncomfortable because I knew that’s what growth feels like.”

Though she did not spend her entire college career in Bowling Green, Schmidthorst College of Business Dean Raymond W. Braun ’80 said that Chapin still made the most of her time here — and employers noticed.

Braun said the college implores its students to take risks, be willing to try new things and show confidence in their ability to adapt — all things that Chapin demonstrated by getting involved right away.

“She wasn’t here a full four years, but during the time she was here, she took full advantage of many opportunities, including being involved with the Student Ambassador Program in our college and studying abroad in Strasbourg to obtain a European Management and a BGSU dual degree,” Braun said.

“It makes employers aware that she’s willing to take on new challenges in a different cultural environment, go there and succeed.”

Chapin said she returned to the U.S. from France to a surge of recruiters regularly reaching out by phone and on LinkedIn, allowing her the freedom to chase opportunities that truly matched what she wanted within the workforce.

Saying yes to new opportunities at BGSU proved to be an invaluable decision, and one that Chapin said shaped her worldview and gave her confidence that she is ready for whatever comes next during her young career.

“Every time you say no, it closes a door. Every time I said yes to something, a door opened,” Chapin said. “I didn’t always know where the door led or what would come next, but I knew that if said yes and tried things that were out of my comfort zone, I was going to learn things.”