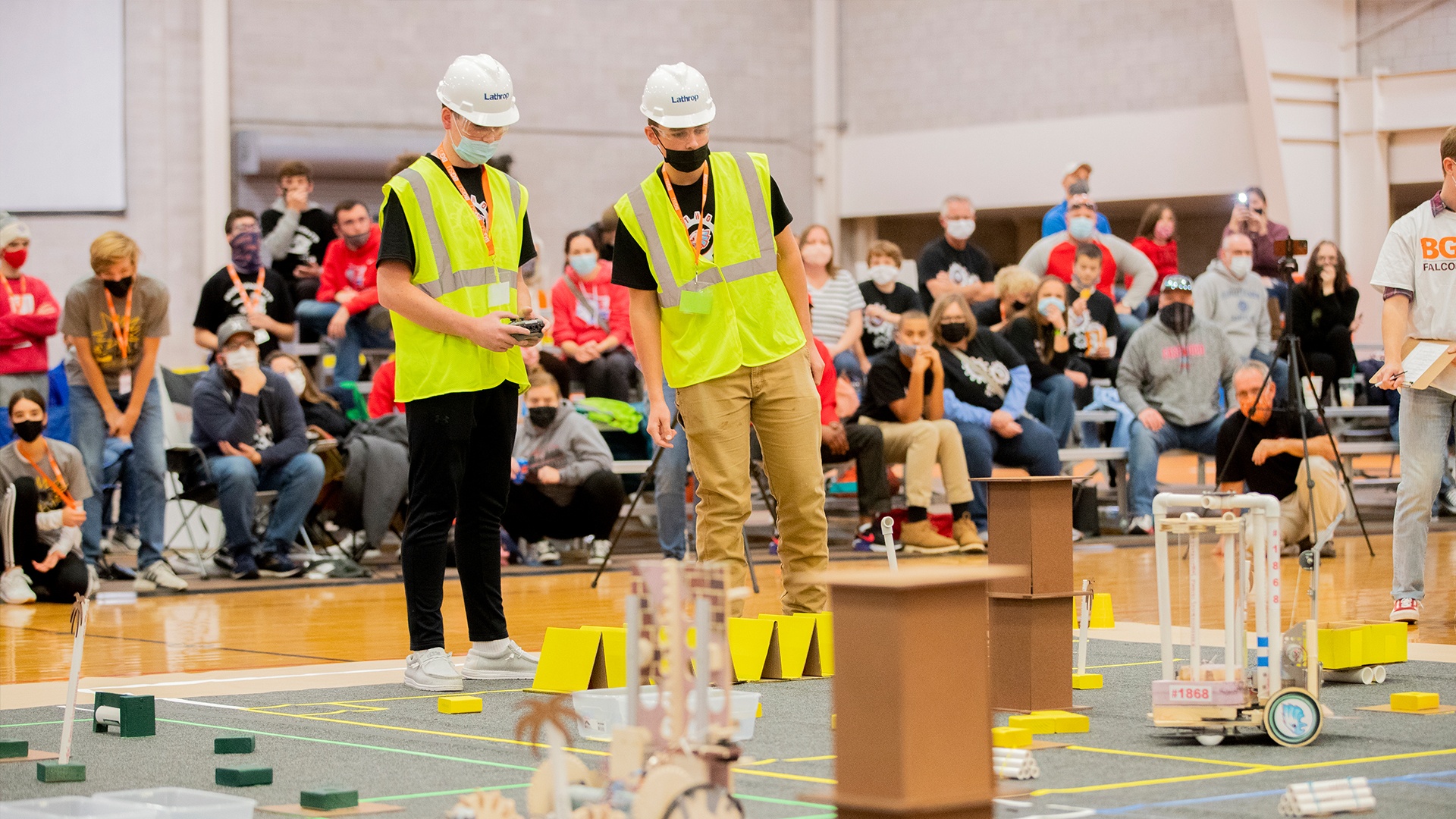 The event — the only one of its kind in Ohio, Indiana or Michigan — featured high school student-led teams who were challenged to design a remote-controlled robot, ultimately competing against one another at Falcon BEST — Boosting Engineering, Science and Technology. 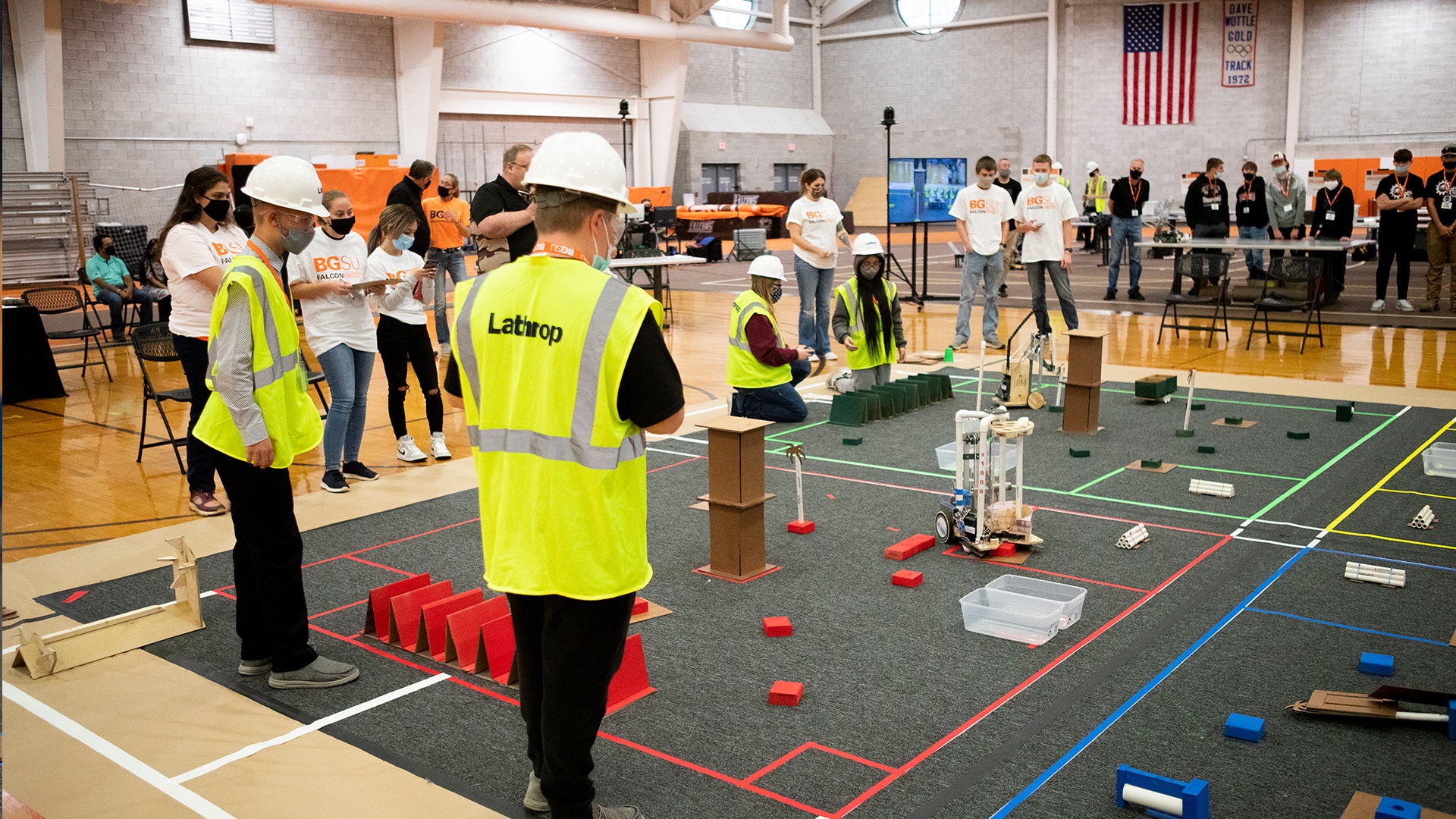 Those teams also were judged on their marketing presentation, project engineering notebook, team entrepreneurship interview and additional categories such as video and website design and robot modeling.

More than 150 students from northwestern Ohio high schools competed in a sports-like atmosphere on the Bowling Green campus. Last year’s competition was held virtually because of the COVID-19 pandemic. While Falcon BEST returned to an in-person event this year, teams had to follow protocols, which included limiting the number of fans per team member at Perry Field House and wearing face coverings. 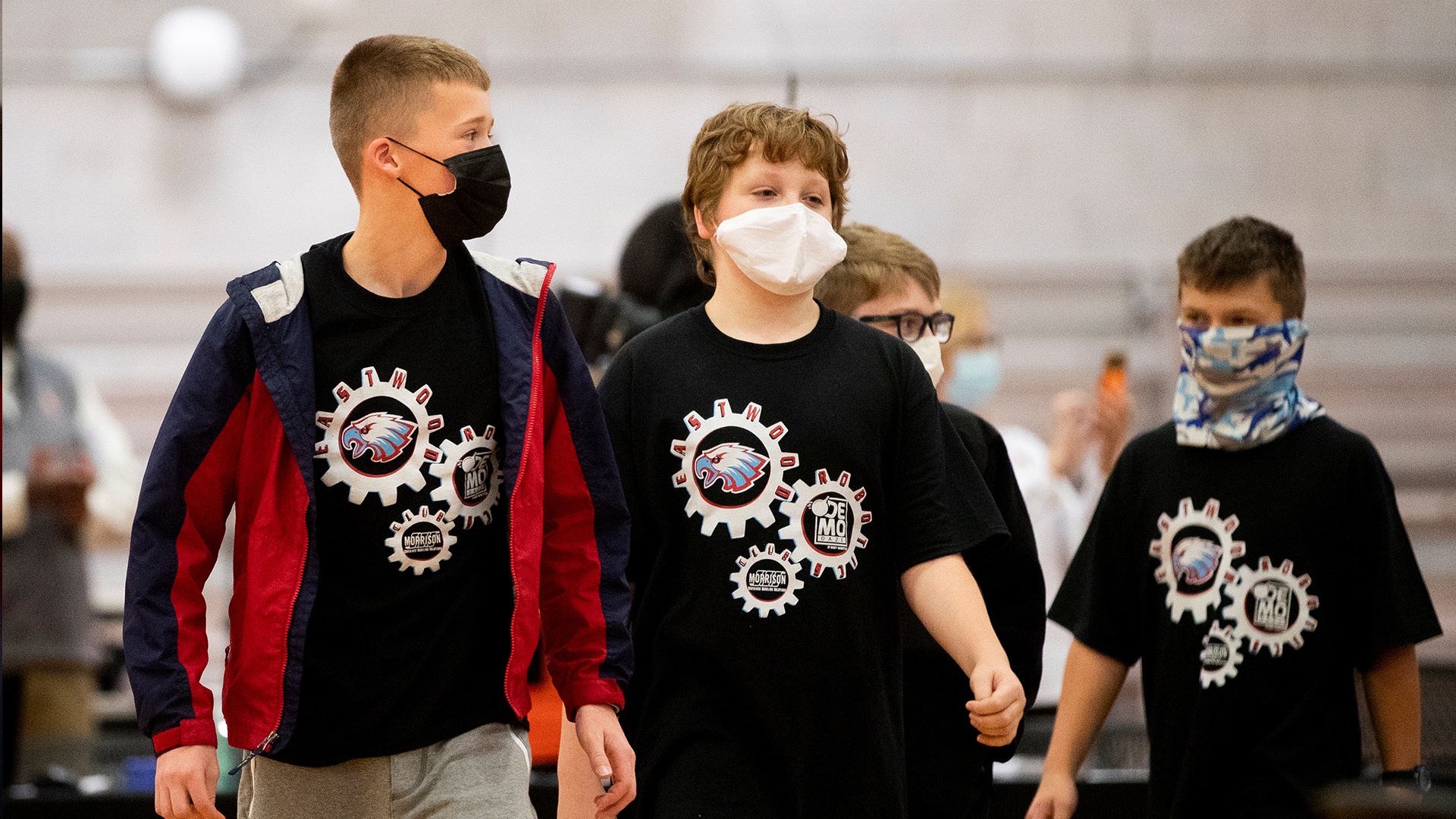 Maumee Valley Country Day School of Toledo was the Falcon BEST overall winner, followed by Eastwood of Pemberville in second place and Wayne Trace of Haviland in third place.

“In spite of the challenges we have been facing for the last couple of years, we are so glad that we were able to host an in-person event this year,” said Resmi KrishnankuttyRema, Falcon BEST hub director and assistant teaching professor in the College of Technology, Architecture and Applied Engineering. “All the teams’ participants appreciated an opportunity to compete in-person, build the robots and get the hands-on experience this competition is known for.

“The students were really excited and enthusiastic to get an opportunity to come together as a team, show their team spirit and expertise and participate — the energy in the building was very high. We are also hoping that the students will continue their interest in engineering, science and technology and will choose BGSU for their future collegiate career.”

The nationally ranked mechatronics engineering technology program at BGSU is an interdisciplinary field that prepares students to work with emerging technologies in robotics and advanced manufacturing. This in-demand field includes the design, development, implementation, automation and management of robotics system technologies such as industrial robotics manipulators, automated guided vehicles, navigation and inspection, assistive robotics, device technologies, human-robot interaction and many other exciting applications. 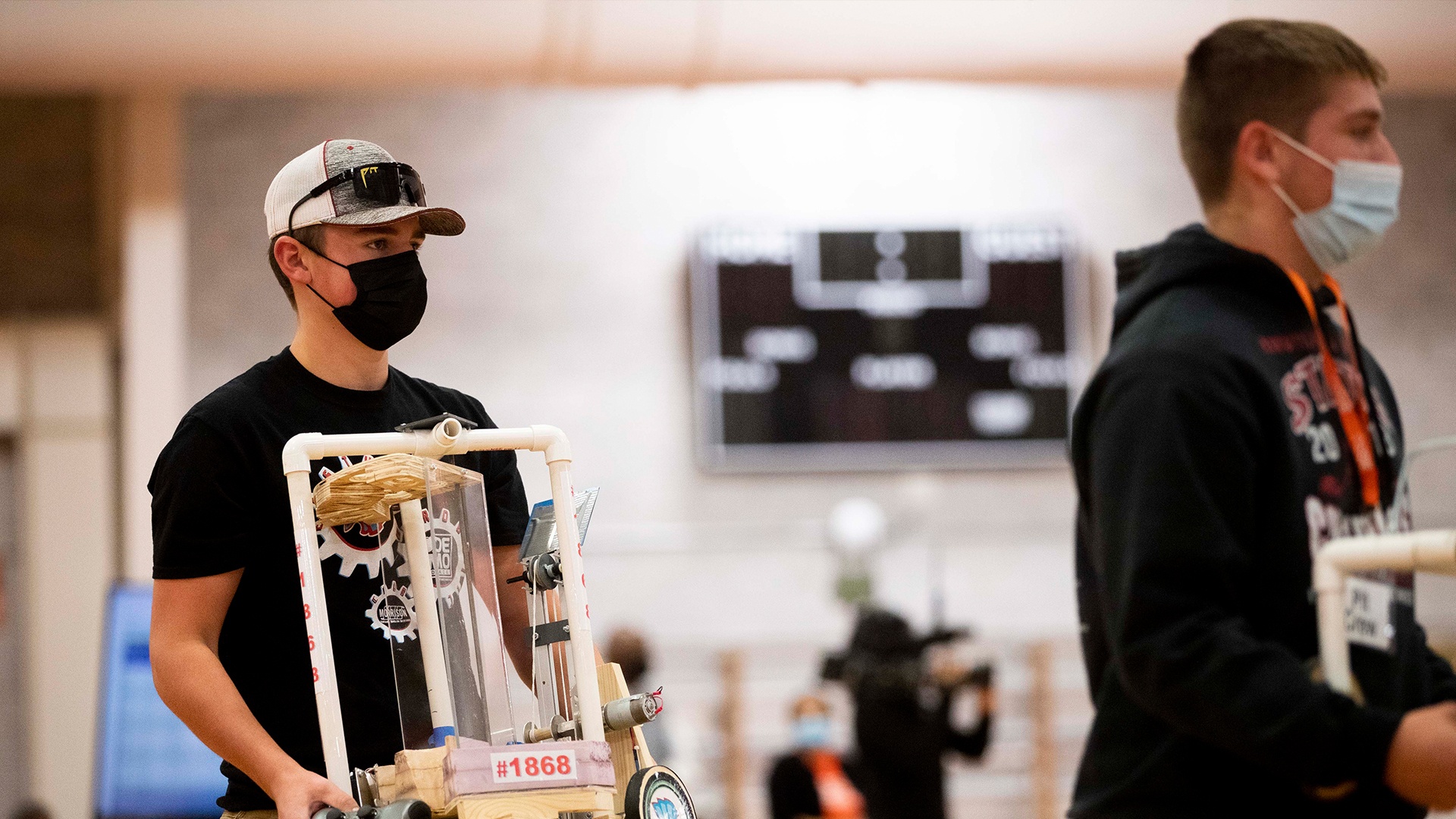 “The Falcon BEST program reflects exactly what the students are interested in, especially the robotics part of it,” KrishnankuttyRema said. “They design and build a robot as a team. This year's theme was ‘DEMO DAZE,’ which means the teams had to design and build a construction-site, demolition robot. 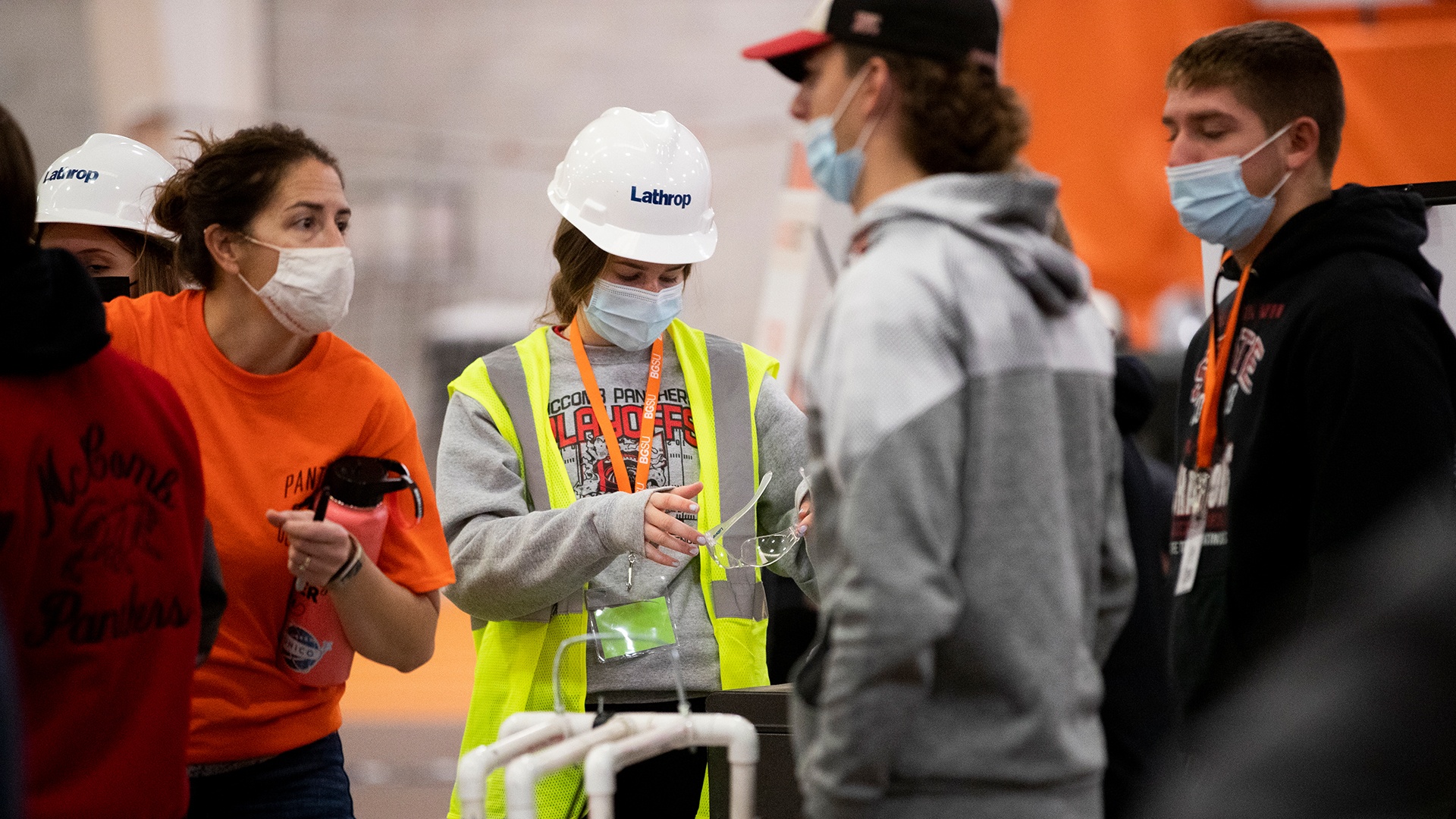 “Our mechatronics program also highlights college students’ ability to design and build programs for the automation side of industry. As faculty in the mechatronics program and someone who teaches several classes in the program, it’s great to see the synergy between what we are doing in the classroom and the Falcon BEST competition.” 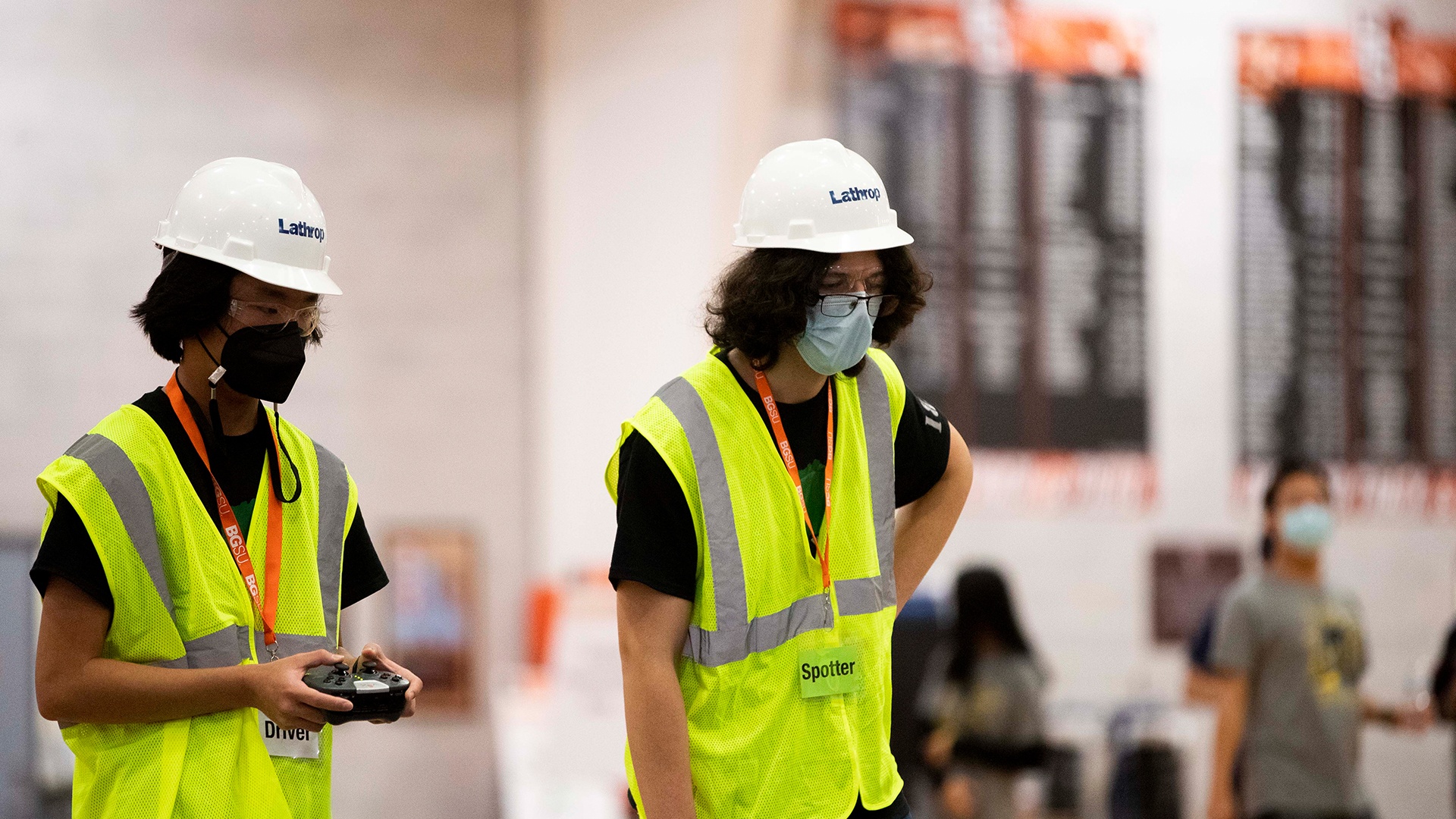 KrishnankuttyRema said some of her students didn’t have the opportunity to participate in robotics competitions when they were in high school, so they were happy to volunteer to help with the event. It was their way of “participating,” but also a chance to pay it forward and help guide the future mechatronics majors. It also served as a great networking opportunity for the competitors.

“For some, this was the first time they got to see the event and capture the essence of the competition,” she said. “So, they stuck around. I had a few students who came at 7 in the morning and stayed until 4 in the afternoon helping us run the event. 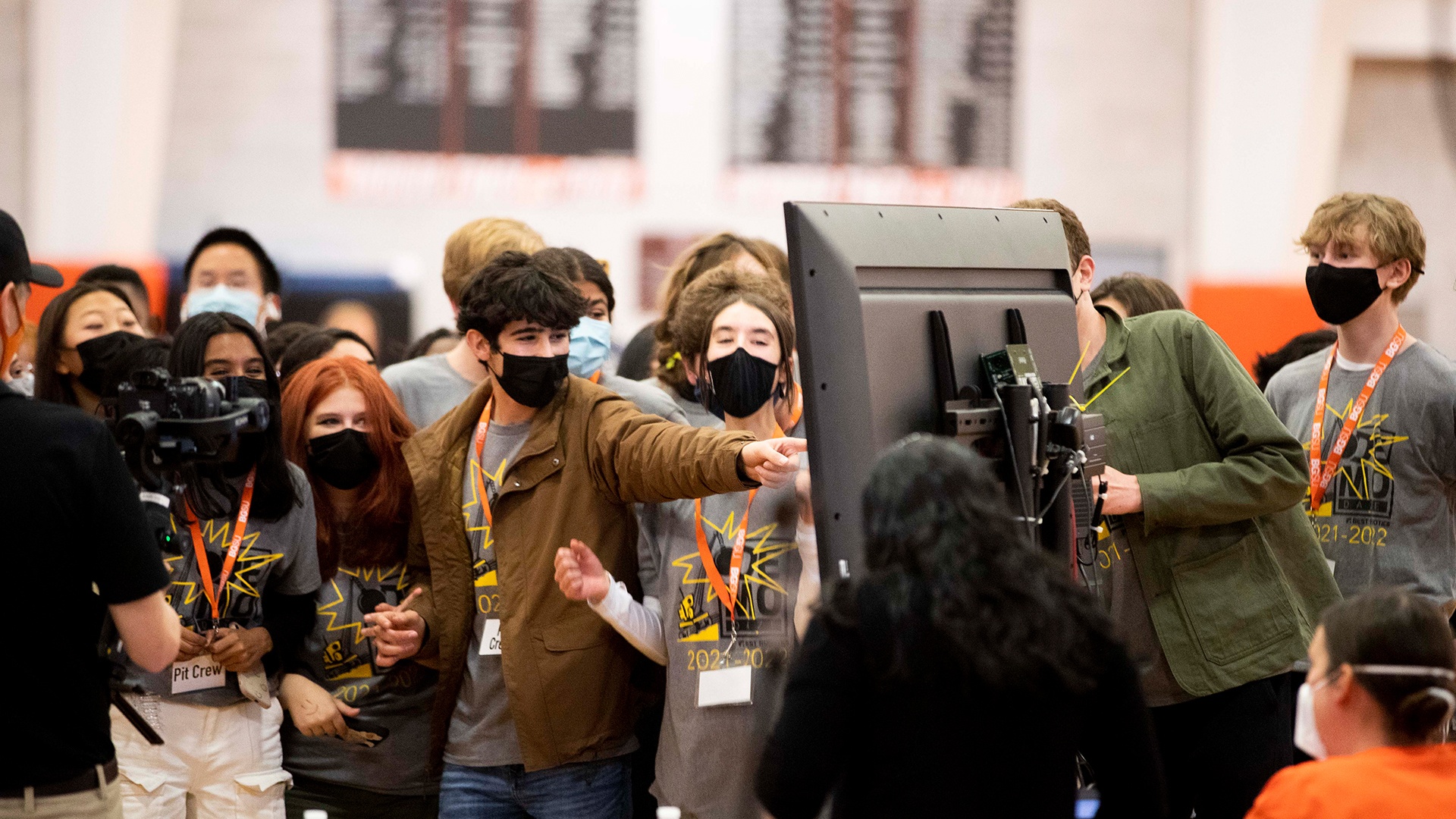 “The Falcon BEST robotics team, including our program coordinator Kari Wilson, field coordinator Lisa Schaller, technical coordinator Benson Ezea and outreach coordinator Melissa Partin-Harding, all worked tirelessly to organize the event. It was a complete team effort to make all of it happen and we thank Dean Jennie Gallimore, Assistant Dean Jared Tuberty, Chair MD Sarder, all the student volunteers, and college administrative staff Linda Leimgruber and Kristi Brandeberry for helping us out.”