Alumnus helps those in need pay their bills with new app 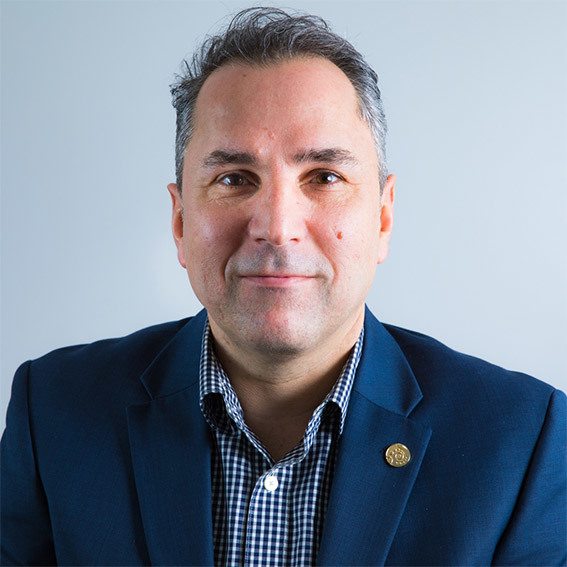 If you ask Gus Hashem ’94 about his life’s priorities, he’ll say family, charity, cycling — and conquering the world’s problems.

Hashem is co-founder and chief information officer of T-CETRA, a business-to-business financial technology company based in Dublin, Ohio. His journey into the world of technology started when he came to Bowling Green State University as a transfer student in the Management Information System program in what is now known as the Allen W. and Carol M. Schmidthorst College of Business.

“BGSU had a very good reputation, and it was a program where I would be shown a full range of management systems,” he said. “That wasn’t the case at all schools.”

He credits that experience and the support of professors and advisors for what he sees as three career transition periods. The first was landing a job even before graduation as a consultant with EDS.

“One of my professors understood what I was trying to do and steered me toward a consulting position where I was exposed to different skill sets, experiences and clients,” Hashem said. “Finding a mentor like that is just as important now as it was then.”

The next phase of his career revolved around the concerns about Y2K when he took a job as a developer for a large company in the travel and hospitality industry. While he beefed up his developer skills, it wasn’t quite what he wanted.

“I felt like I had reached a personal growth limit,” Hashem said. “I tried to see the problem to fix but couldn’t quite put my finger on it.”

It was the next step that really pulled it all together for him, when he started working with a small company, again as a developer, but this time becoming much more involved, and he started learning what it takes to run a business.

This is where creating public good comes in. He and his colleagues saw a market in need of a solution, and people in need of help.

They founded T-CETRA, which converts cash payments into cashless transactions benefiting retailers, but also those people without access to a bank and live on a cash basis. Since so many services such as utilities, transportation and cell phone services are paid for on a cashless basis, paying for them without a bank account can be problematic.

“It used to be that a person would go to a store and pay cash for a card,” Hashem said. “They’d scratch off the coating on the card to get a number they could then enter into their phone to make cashless payment. What T-CETRA does is eliminate the need for the card, which solved the need for costly inventory for small businesses and reduces the risk of cards being lost or stolen.”

It’s this technology solution that has led to Hashem’s newest project — NeighborRelief — a way for people to directly assist those in their own community who are in financial straits.

“Something special can happen over just a cup of coffee,” he said. “I was at a meeting with Tony Wells of the Wells Foundation, and we sat down afterwards to bat around a few ideas. What we came out with was the beginnings of NeighborRelief.”

NeighborRelief allows nonprofits to tell the story of specific neighbors in need of help to pay for things such as gas, electric, phone, water, grocery or internet and connect them to potential donors who can make payments directly to the service provider.

Just after their conversation, the COVID-19 pandemic hit, which put more pressure to move quickly.

“We knew there were people who really needed assistance just then,” Hashem said. “We also knew there were people who wanted to help. With our platform, donors helping a neighbor in need get a confirmation that their tax-deductible gift was transferred directly to the appropriate provider to avoid service shutoffs. It is a secure, fast and efficient payment process that allows nonprofits to spend more time on their core missions.”

This all comes back around to what he learned at BGSU and what he hopes students now are doing as well — defining both short-term goals and long-term missions.

“As a student, you have to pick up skills left and right and not waste any time doing it,” he said. “You want to learn from people who have done different things in life and surround yourself with people who can advise you. But you have to see yourself beyond school. Think about what is important to you, whether that is a greener environment or an improved efficient electric grid, you need some big goals. But make sure it is something you enjoy.”