Maggie's House: A labor of love and a lesson in social impact 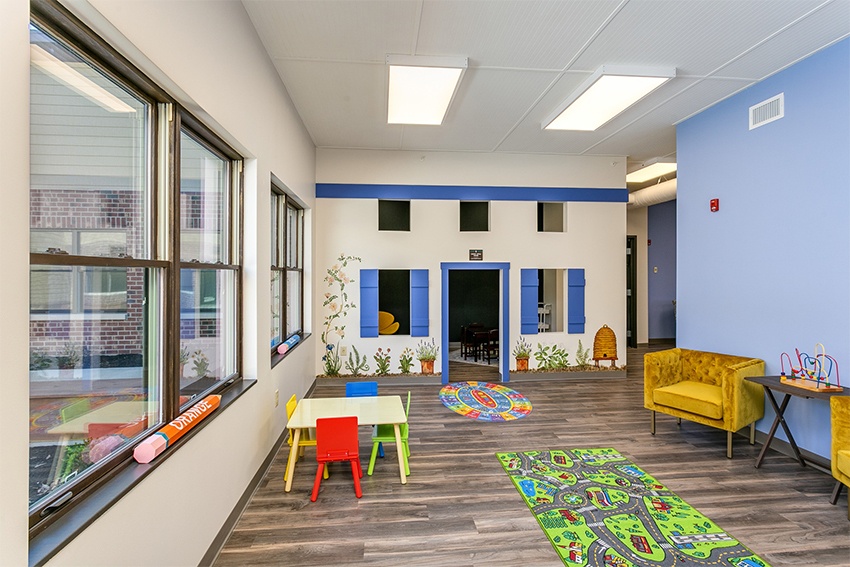 Patrick Hansford never met his birth mother, but one of the last projects of his architectural practice is dedicated to her.

Hansford’s design of the Franklin House, a shelter for domestic violence survivors and homeless individuals in Troy, Ohio, became a true labor of love for the 1983 Bowling Green State University graduate and current assistant teaching professor in the University’s architecture and environmental design program in the College of Technology, Architecture and Applied Engineering.

Throughout his successful 35-year career as a full-time architect, Hansford worked on many projects that have impacted communities. A life-changing discovery during the planning, constructing and completion of the Troy project made this story even more heart-warming than the comfort the Franklin House provides to its residents.

Hansford started working with the shelter in 1995 when he helped them get a community development block grant to upgrade their mechanical system. That started a 25-year relationship with them. He helped with other projects, including refurbishing a downtown building to serve as a retail component for the shelter and converting a duplex into a men’s homeless shelter.

Since the shelter was started by Barbel Adkins in 1979, the population of Miami County has grown and the demand for shelter space has changed. Now under the leadership of Adkins’ daughter, Barbara Holman, the shelter’s client base has gone from 25% homeless and 75% domestic violence to 50-50.

The change in population also impacted the design of the space, Hansford said. The design is driven by the needs of each population and the funders — Housing and Urban Development for homeless projects and Department of Justice for domestic violence projects.

“We had to think about how to provide common areas. Survivors of domestic violence need a quieter space and a sense of security, and to not be around some of the frenzy that homeless residents bring to the space,” Hansford said. “One of the features of the project is an interior courtyard so they can be outside in an area that their abusers can’t find them.”

Initially they were going to expand an older church they had previously purchased and used for anger management counseling for abusers, but, ultimately, the cost was prohibitive. Instead, they decided to renovate and expand a former medical office building. They renovated the 5,000 square-foot building and added 8,300 square feet at the Crescent Drive site.

Now, instead of housing 22 women and children, the shelter can hold 40 individuals — 20 beds in the domestic violence wing and 20 beds in the homeless wing.

“The project is a shining example of focusing on what’s important. The building is designed and intended for the people who will use it,” Hansford said. “It won’t stop abuse or homelessness, but it provides a safe space and the shelter they need.”

Designs for the children’s play space — his personal favorite spot — and the dining room help create a sense of community. The children’s space within the shelter looks like a two-story house with windows and interior walls with chalkboard paint and a plethora of books. The space, which plays on the imagery of an affordable housing project created in the 1930s by Troy’s Hobart family, is named for matriarch Lucia Hobart Bravo. The dining room has a lot of windows to let in natural light, but the windows are frosted to keep people from seeing inside.

For Holman, executive director of the Family Abuse Center of Miami County that runs the shelter, “This has been a long-term dream and need in our community. We had outgrown our existing facility and this new shelter expands our ability to shelter individuals in need.

“Patrick has always been a champion and a big ally of our mission. He has always encouraged us to think outside the box and pursue other funding opportunities,” Holman said.

In addition to grant-writing assistance, he offered in-kind services to provide drawings that are necessary when requesting grants.

“He has opened quite a few doors for us. I can’t say enough about what he has done for our agency,” she said.

“He likes the work he does, but he also likes making a positive impact in the community. I think that’s really at the heart of who Patrick is.”

With the project completed and the services transitioning into the new space, Holman can see first-hand how Hansford's designs make a difference for the residents.

“Our new, big courtyard is designed in a way that we are able to actually have people sit outside, feel comfortable and be able to enjoy the fresh air without compromising their safety,” she said. “I knew it sounded great when Patrick was designing it, but when I see it, I can see what an impact his design has and how it is going to make what we do even better.” 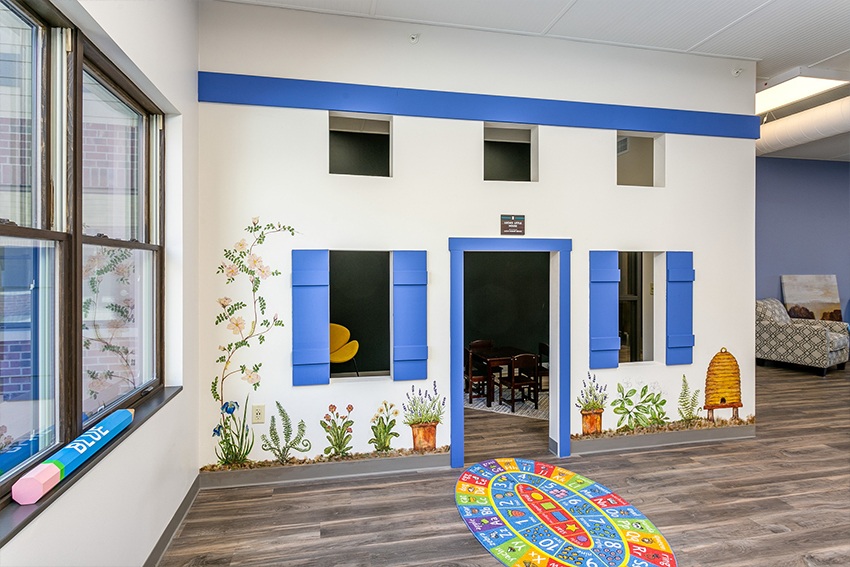 The backstory and the connection

The shelter project intersected with a personal journey for Hansford. While he was working on the project, the State of Ohio opened adoption records from 1964.

“I always knew I’d been adopted, but when the records were opened, I decided to search it out. I learned a lot more than the welfare caseworker ever told my (adoptive) mother,” Hansford said.

As he researched the internet for more information than the records provided, he discovered his birth mother, Maggie Bishop, had tragically died in an automobile accident not long after he was born. Her obituary gave him another tidbit of information that led him to connect to a biological cousin and eventually to an aunt, his mother’s younger sister.

Through those conversations, he discovered not only that the shelter project would take on new meaning, but also that his birth family never knew what happened to him because of the circumstances when he was born.

Maggie’s life was anything but easy. The man she married would often clean out their bank account, run off and leave her with nothing, yet come back and repeat the scenario. He was arrested for theft and sent to prison. During his incarceration, she met someone new and decided to divorce her husband.

“It was such a misogynistic society at the time, that when the caseworker found out my mother was pregnant with someone else’s child while she was married, they threw my mother in jail,” Hansford said.

During that era, when the State took a baby at birth from its mother, their babies were put in a windowless nursery so that family members could never see them, Hansford was told. “When my mother’s sister, Sue Lowry, called me, one of the first things she said was, ‘You were born at 5:30 in the morning on May 6 and I’ve been looking for you ever since.’”

The more he learned from his aunt, the more he realized that his mother was in an abusive relationship.

“That’s when this project became personal for me. I had a code name for the project: Maggie’s House,” he said. “I realized her life might have been different if a shelter like this had been available to her in the 1960s. I dedicated the project to her, and my in-kind services are donated in her memory.”

All of the previous work he’d done with the shelter was more about having social impact.

“This time was something different. I thought a lot about what’s changed in how we treat survivors of domestic violence in the last 50 to 60 years,” he said. “What would it have been like for my mother and her three children? Instead of being taken away from her, they could have sought shelter and started a new life.”

Hansford’s decision to become an architect in the first place was born out of strong relationships he had with his adopted families. His adoptive mother and father created a close-knit family environment. When his adoptive father died about two years later, his mother married Wayne Hansford, who adopted Patrick and gave him the Hansford name.

“Doing the right thing came from him. He told me he worked hard because he wanted to be an example for his children,” Hansford said. His father also worked in a slaughterhouse, which gave Hansford the perspective to make factories more humane for the people to work in and for the work being done.

“I thought architecture was a way for me to affect people’s lives, that it was more than a profession,” he said. 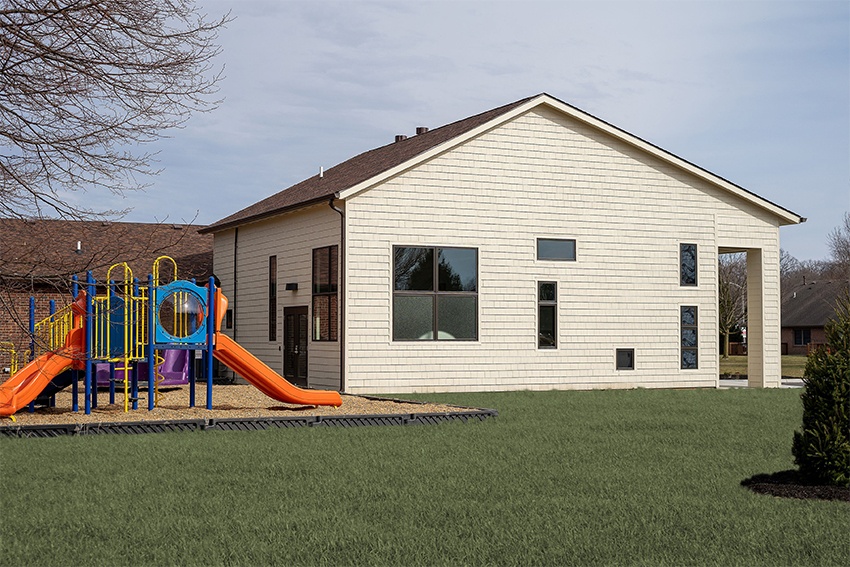 Hansford credits his adoptive families for setting him on his successful career journey.

“My fathers gave me family and opportunities,” he said. “I was able to afford college and attend BGSU because of the Ohio War Orphan Scholarship” for children of deceased or disabled Ohio veterans who served during a period of declared war or conflict.

He earned a bachelor’s degree in design technology, and he met his future wife, Sheila, who was a business student in what is now the Allen M. and Carol A. Schmidthorst College of Business.

After Hansford graduated from BGSU, he pursued a master’s degree in architecture at Miami University. There, two of his professors, Tom Dutton and Paul Clark, emphasized how architecture and social impact could go hand-in-hand.

In their discussions about architecture, instead of talking about “the high art of architecture, these two guys wanted to talk about affordable housing, senior housing,” Hansford said. “I remember we met a couple whose husband had been a high school principal and when he retired they couldn’t afford housing. Tom would introduce us to people like that and remind us that no one wants to be poor.”

Those lessons informed much of Hansford’s work over the years. “I knew I wasn’t going to be making a lot of money because I wanted to be doing projects to make sure people had decent housing and to bring a positive impact on communities.”

As Hansford transitions from his private practice to academia as a faculty member in BGSU’s School of the Built Environment, he welcomes the program’s focus of integrating social impact concepts into the courses and studios. Students in the first senior studio he taught at BGSU were asked to incorporate a domestic violence shelter into their master plans for an eight-block area in Toledo.

This year, they are working with the historic district in a small Quaker village in Ohio that was one of the largest Underground Railroad stations in the state. Approximately 4,000 to 8,000 slaves went through the town.

“Do we glorify the Quakers who were following their faith because we know their names and their faces? Or do we focus on the 4,000 to 8,000 people who were nameless and faceless who came through here on their path to freedom?” Hansford asked the students. “How we respond to that through architecture and as a society are important questions.

“It’s that kind of work that inspired me and that drives me now with my students.”

The fact that his last big project was designed for and dedicated to a mother he never knew and who never knew him is a lesson for the books.