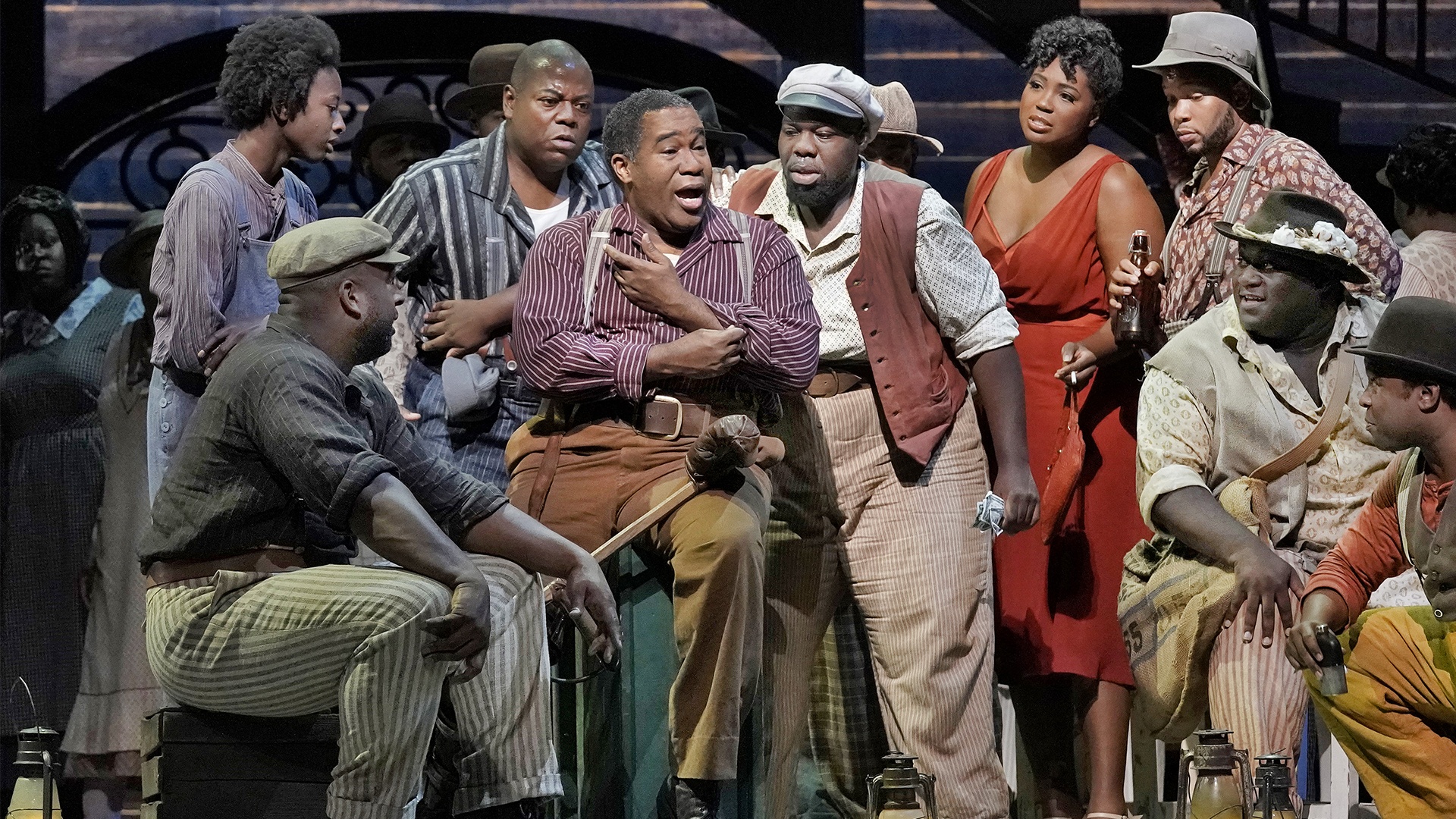 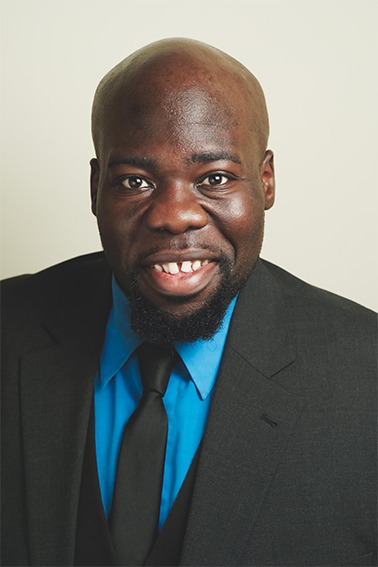 Errin Brooks ’12 grew up in Detroit singing gospel, rock and roll, funk and rhythm and blues. When classical music was introduced into his repertoire in high school, his life was forever changed.

Brooks’ musical journey from childhood until now paved the way for a career in opera that has included debuts at Kennedy Center, Carnegie Hall and the Metropolitan Opera. His recent role as Mingo in the Met’s “Porgy and Bess” netted a 2021 Grammy Award for the 2012 Bowling Green State University College of Musical Arts graduate. The Grammy was awarded for the live recording of the Met’s production of George Gershwin’s classic opera.

“Winning the Grammy is amazing and humbling,” Brooks said. “It shows that there are people who appreciate the hard work that we put into this, not only that you did it, but that you did it exceedingly well.

Everyone associated with the production was deserving of the award. They all worked hard knowing “we were carrying some love to the spirit of our ancestors. We knew how important that was and we would talk about it,” Brooks said about the production. “The whole environment at the opera house was very uplifting, and it was one of the most fun productions I’ve done.”

Music in his genes

It is no surprise that music is integral to Brooks’ life. His paternal grandfather had a band that performed in Detroit, Chicago and the central Midwest. On his mother’s side, music and church went hand-in-hand. He remembered watching his older sister stand at the microphone during church and “she just moved the entire sanctuary with her voice,” he said.

“My mother tells me I was always drawn to music. When I was running around as a young tyke, she would turn on the radio and I would stop, sit and stare at the radio,” accomplishing her wish for him to calm down.

Though music was always a part of his life, he didn’t think he could make a living as a musician. A serendipitous move to Martin Luther King High School, a magnet school in Detroit, opened his mind to new music and new ideas.

“When I was introduced to the world of classical music, it was like an instant connection at the time,” Brooks said. The combination of a great high school choir director and his mother’s push to get him engaged in academics paid off. He had to keep his grades up in order to do the things he loved, music and football, which helped develop him as an all-around person.

After high school as the combat in Afghanistan and Iraq was escalating, he initially planned to follow in his father’s and grandfather’s military footsteps; however, his father convinced him to try to go to college.

“It was the 11th hour, and we didn’t know anything about recruitment or applying to universities,” Brooks said. On a recommendation from his pastor, whose sons went to Madonna University in Livonia, Michigan, Brooks applied and was accepted. It was there that his voice teachers — Barbara Wiltsie and Drs. Chris Grapentine and Allen Schrott — told him he could make a living singing classical music.

“At first, I didn’t believe them, but when they showed me videos of Marian Anderson, George Shirley, Leontyne Price, Jessye Norman, who were all great Black opera singers, I saw for the first time, people who looked like me and were making a living singing opera,” Brooks said. “I thought maybe this is something I could do.”

During his undergraduate music degree at Madonna University, he also fell in love with musical theatre, after performing in shows such as “West Side Story,” “Godspell,” and “Into the Woods.” Opera still was part of his training.

“Opera just felt calming. It was opera choosing me rather than me choosing opera,” he said. 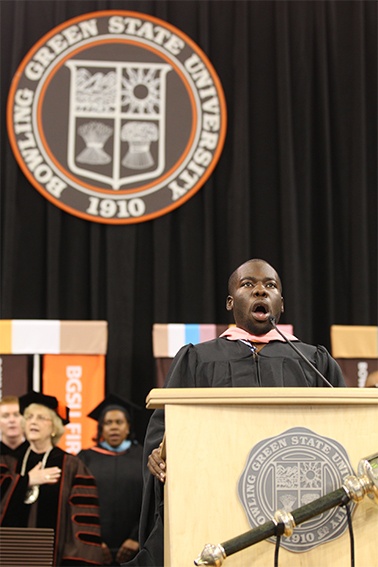 After graduating from Madonna, he started singing in the Michigan Opera Theatre chorus. There, he met so many talented artists who made him love opera even more. They were among the people who convinced him to explore graduate schools to perfect his talents. While he applied to some of the top music conservatories, he was asked to audition only at Eastman School of Music and BGSU.

Initially, he was disappointed that most of the music conservatories he applied to didn’t ask him to audition, but his BGSU audition was a wonderful experience. He had great rapport with the music faculty members who participated in his audition, including Christopher Scholl, Jane Rogers, Myra Merritt and Sean Cooper. He also felt comfortable enrolling in the University’s Master of Music degree program because Bowling Green was closer to his hometown than Eastman was in Rochester, New York. In addition to being accepted at BGSU, Brooks also was offered an assistantship that covered his tuition and paid him to study and better his craft.

“How could I turn that down?” he said. He also helped direct choirs and provide private voice lessons to some undergraduate students.

From his own voice teachers, Scholl and Cooper, he learned techniques he could integrate into his teaching practices. “The whole time, I was extremely terrified that my students would leave worse than before they came,” Brooks said.

“At their juries, it was a full-circle moment when every last one of them blew me away with their performances. Just like a parent, it was humbling to find out that all the time they were listening,” he said. “Those were some of the things that made me fall so completely in love with BGSU. My teachers, at Madonna and at BGSU, my mother and my family helped me get to where I am. I am forever grateful. God led me to exactly where I was supposed to be.”

During his time at BGSU, Brooks performed in four BG Opera Theatre productions—as Col. Calverly in “Patience,” Belcore in “L’elisir d’amore,” Il Conte in “Le Nozze di Figaro” and The Priest of Jove in “Handel’s Hercules.”

In 2010, he won first place as a baritone in the Dr. Marjorie Conrad Art Song competition in 2010, and was inducted into Phi Mu Alpha Sinfonia, a music fraternity for the mutual welfare and brotherhood of musical students.

He also participated in the college’s art song competitions, which he credited BGSU for learning the lyrical side of singing. “That’s where you develop great talent,” Brooks said. He also started to explore the move from baritone to tenor.

Scholl, associate professor and coordinator of the college’s voice/opera area, described Brooks as a hard worker who was always eager and willing to jump into anything.

“He made it look so easy, even though he worked very hard,” Scholl said. “He has a zest for life and he was always willing to try new things. He was amazing and talented from the get-go. But talent is only one part of the equation. There is always a modicum of luck too, but he was definitely a hard worker.

“It’s a long way from Detroit to the Metropolitan Opera. These are big steps but he did it with hard work, tenacity, talent and brains,” Scholl said.

Journey to the 'main stage'

His successes after BGSU included additional studies at Roosevelt University in Chicago, where he pursued an artist diploma; time performing with the Chicago Opera Theatre; and top prizes in numerous singing competitions. He also connected with Allan Glassman, his current voice teacher and mentor, and Scott Gilmore, his voice coach. They helped him move from being a baritone to tenor.

He felt stuck and as if he was not going anywhere. During that time, he turned 30 and considered leaving the industry, but that is when his luck started changing. After signing with an agent and moving to New York, he saw his hard work pay off when he won more competitions, including the Met’s Michigan district competition.

“Not everyone can see their hard work pay off in their lifetimes, so I was humbled when I saw there were people who appreciated the work I put into my craft,” Brooks said. “That is also when I started to realize that all of those places along the way were at the right time.

“All those rejections helped strengthen my resolve,” he said, and led to his tenor role debut as Pinkerton in “Madame Butterfly” in the Utah Festival Opera, and debuts at Carnegie Hall in 2018 and the Met and Broadway, both in 2019.

He still studies with Glassman and now Andrea Delgiudice and is represented by Peter Randsman at Randsman Artists Management.

The 2021-22 season will be his third consecutive season as a Met artist, opening the season singing Nathan in Terence Blanchard’s “Fire Shut Up in My Bones,” the Met’s historic first performance of an opera by a Black composer, and he will reprise the role of Mingo in “Porgy and Bess.” He also will perform as Mr. Charles and a member of the ensemble in Ricky Ian Gordon/Lyn Nottage’s Broadway show “Intimate Apparel” at Lincoln Center Theater.