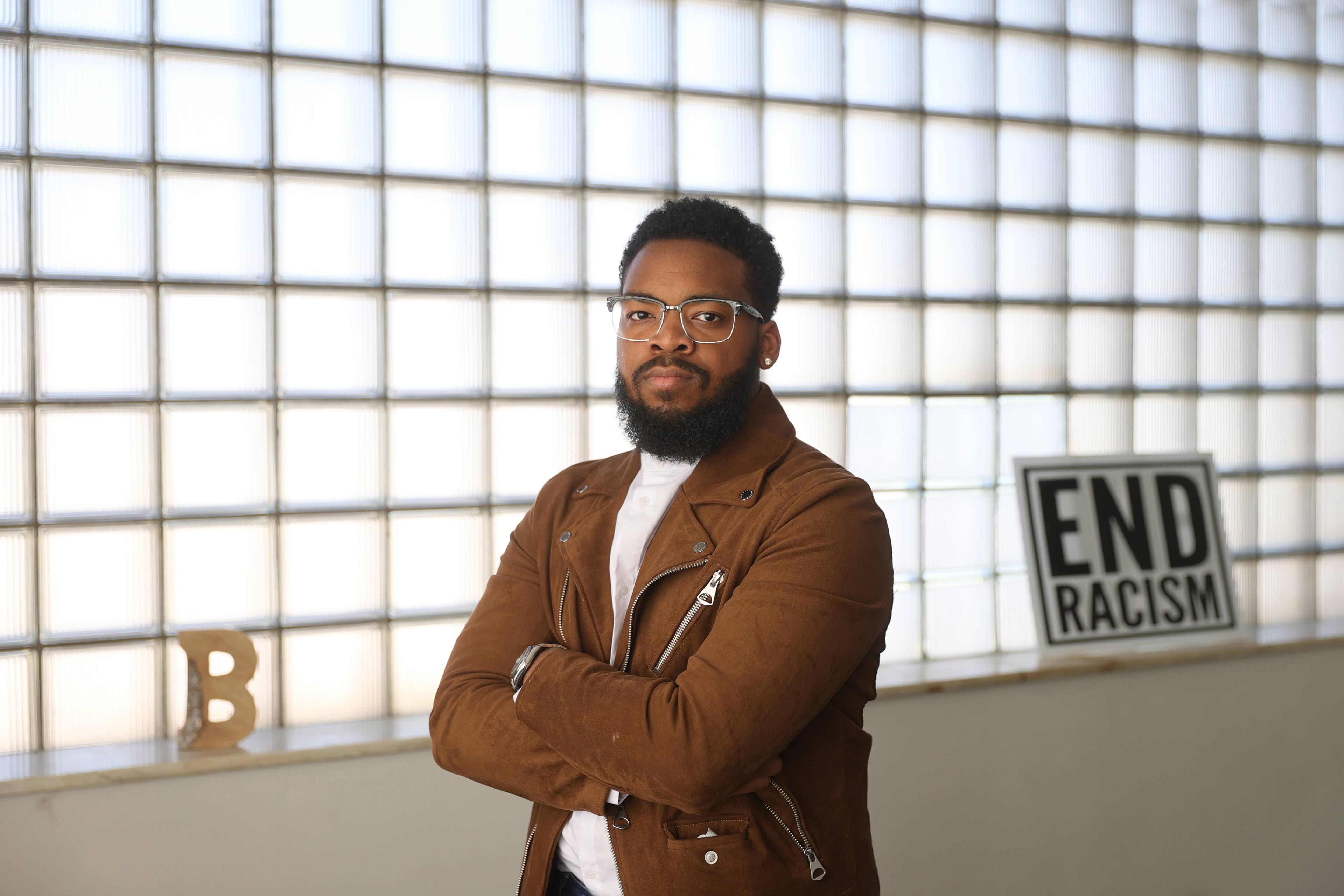 For Anthony King, activism is more about bridge building and community enriching than protests and rallies.

The Bowling Green State University junior believes that community activism is vital to community engagement and change, but he acknowledges that sometimes protests and rallies are important and needed.

Case in point: After George Floyd’s death last summer, King, a communication major in the College of Arts and Sciences, was galvanized to do more than lay on his couch and watch the protests in cities across the country and the world. He planned a peaceful protest for May 31, 2020, at Bowling Green’s Wooster Green, expecting about 50 people to attend. When the crowd grew to about 500 people and the protest received praise for its peaceful approach, his future as a community activist was ignited.

Within a few months, he organized Bowling Green’s first “Juneteenth” celebration, founded the nonprofit organization Black Rights, Activism Visibility & Equity (BRAVE), was named to the city’s Human Relations Commission and helped convince the city to create a police liaison for communities of color.

For his new-found role as a community activist, King was recently named a 2021-22 Newman Civic Fellow by Campus Compact, a national coalition of more than 1,000 colleges and universities dedicated to the public purposes of higher education. He was one of 212 community-committed students from 39 states, Washington, D.C., and Mexico to receive this prestigious designation.

BGSU President Rodney K. Rogers nominated King for the award, citing his leadership in “raising awareness about systemic racism and discrimination in our community throughout the past year.”

“As you can see from his leadership in BRAVE, Anthony has contributed to significant change in our community in a short period of time,” Rogers said. “It was a great honor to nominate such a passionate student who embodies what it means to be an active citizen. He is just one example of how BGSU is a public university for the public good.”

King’s selection as a Newman Civic Fellow marks the seventh consecutive year that a BGSU student has earned the award.

King is honored and excited about the fellowship that will connect him to hundreds of other young leaders across the country, to share thoughts on ideas of leadership, activism and community organizing,

“I’m ready to experience, to make the connections and hopefully just continue to be a voice and to serve the community,” King said.

He started college on a full music scholarship to Norfolk State University, a historically Black college in Virginia, where he planned to pursue his musical talents as an opera singer.

His penchant for activism was piqued there when he saw disadvantaged structures and systems that were different from what he was used to in his Detroit hometown.

He decided to move closer to home and enrolled at BGSU after he visited the campus.

“Everything fell into place so smoothly, it just felt right. The faculty actually cared about my success,” King said. “It was almost like Bowling Green wanted me to be here.

“I had been debating for a long time if I wanted to continue in music because it was something I was good at, but it felt like there was something else that I should be doing,” King said about his move from a music degree to communication.

The death of George Floyd was where it came full circle for King.

“I was so passionate about it that I couldn’t sleep at night, and I felt so angry, which was not like me,” he said, but those feelings are what moved him to action.

After he organized the May 31, 2020, protest, he was energized from the community momentum and determined to make this movement sustainable.

“I want to create something that is long lasting, where Black people are recognized and feel welcome,” he said.

King and his seven-member BRAVE leadership team are focused on creating real change in local government policy to fight systemic racism and help to create resources and opportunities for Black people to succeed in education and business.

“It’s really my love for people that drives my activism in this. I think I’ll always do activism and community engagement through love and community building,” King said. “We can’t fight fire with fire. We have to fight racism with unity and solidarity.”

One of BRAVE’s goal is to integrate culture and diversity into the community to encourage people within the community to appreciate and recognize cultural diversity. He wants to make sure the effort is ongoing, even if he decides to move on after he graduates.

“Bowling Green is like many other communities. It can become the model,” King said. By creating similar activism in other communities, he hopes that Black people and other people of color will be able to go anywhere in the country and feel welcomed and at home.

“I hope to leave my imprint on Bowling Green and to encourage other activists and community organizers to become leaders in their communities,” he said.

About King’s leadership legacy, Martha Chandran-Dickerson, a writing consultant and moderator for “Be the Bridge" online community, said in her nomination letter, “Like Dr. (Martin Luther) King, who he shares not only a name but a birthday with, Anthony has a vision to amplify all of the voices of those who have been silenced. … He is forging a path forward, not just by speaking and doing but by listening and learning, making him a compelling leader we are convicted to follow.”