Ann-Marie Daugherty ’00: ‘I’ve learned how to ensure that my voice is still heard’ 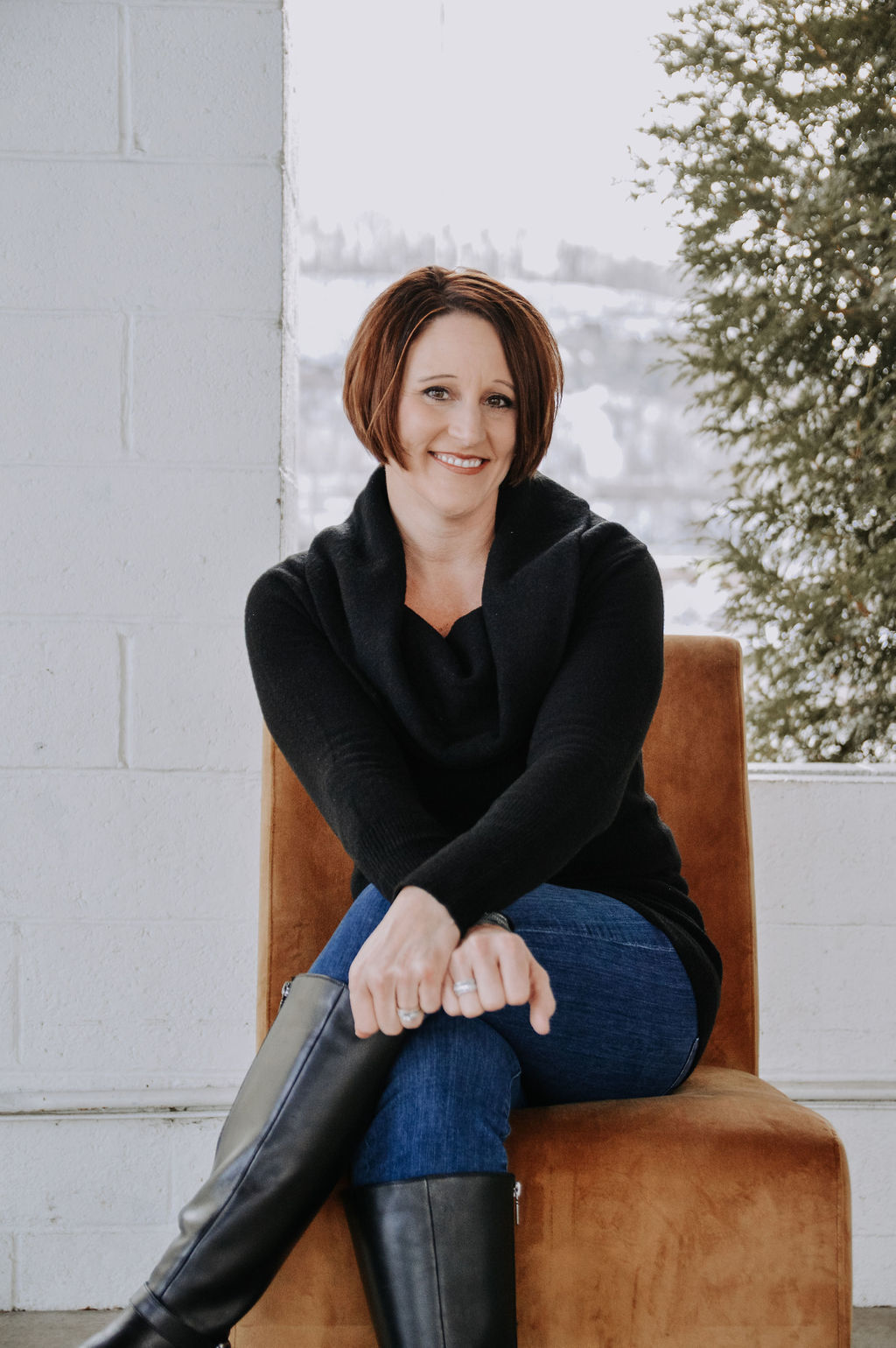 Do you remember how grocery stores couldn’t keep toilet paper stocked on their shelves? That’s one of the first things the COVID-19 pandemic disrupted in 2020: the global supply chain.

It’s something Ann-Marie (Lance) Daugherty ’00 won’t soon forget. At the time, she was the vice president of logistics for the Giant Eagle supermarket chain in Pittsburgh — a role in which she was selected as one of the Top Women in Grocery by Progressive Grocer in the senior-level executive category in 2019.

“It was crazy,” she said. “Our company worked 43 days straight. Our first day off was Easter Sunday, and that's only because we shut the whole company down for a day.

“The pandemic resulted in a change in consumer behavior nobody could have predicted. Just from a pure grocery perspective, when the governor of Ohio announced the schools were closing, it changed our world forever. People were flocking to the grocery stores and clearing out the shelves, buying products they didn't even need in quantities they were never going to use.”

Daugherty graduated from Wadsworth High School, outside of Akron. At Bowling Green State University, she earned a Bachelor of Science in business administration (BSBA) with a specialization in hospitality management from what is now known as the Allen W. and Carol M. Schmidthorst College of Business.

She remembers how out-of-classroom activities helped her learn what hard work and dedication could help her accomplish, both in her classes and her career.

“I was a member of the BGSU Crew, which was a club sport,” Daugherty said. “We rowed on the Maumee River and practiced at 5 a.m. every day. I also put myself through school by working at a hotel not far from the Bowling Green campus. I worked third shift, so I would leave work and drive to Toledo to be on the water by 5 a.m. and then come back and go to class.

“The amount of discipline I learned — in order to be successful — helped get me through school with very little in student loans. Plus, I was participating in a sport that I had never done before while establishing lifelong friendships. There are memories from Bowling Green that I'll never forget because of that.”

The late Ken Crocker was a faculty member who Daugherty and other students could depend on. He established and managed the hospitality management program.

“He had the most influence on those of us who were in the program and a part of the Hospitality Management Society,” she said. “We were a fairly tight knit group of people. Professor Crocker connected students with some of the best hotel chains for internship opportunities. We went to New York a couple of times to attend what is now known as The Hotel Experience: Reimagining Hospitality, held at the Javits Center. He was very committed to the success of each of his students, and invested time in mentorship geared towards helping us learn the things that mattered to employers in the hospitality industry.”

From hotel chains to supply chain

Daugherty interned with the Hyatt Regency at the Dallas Fort Worth International Airport the summer before her senior year at BGSU. She was offered a job to come back once she graduated. After commencement, she moved to Dallas and worked for Hyatt in the food and beverage space.

“It was a 1,400-room hotel right in the middle of the Dallas Fort Worth International Airport,” Daugherty said. “I was working as an assistant food and beverage manager for 10 months, when I received this phone call out of the blue.”

A hospitality company that owned several hotels — a company she worked for in high school — offered her a general manager position at a Country Inn & Suites in York, Pennsylvania. While there, she learned a lot by running the property. She was transferred to a larger property in Reading, Pennsylvania, a year later.

After two years in Reading, “I woke up one day and decided I was ready to be done with the hotel business,” Daugherty said. “I was working a lot of hours. In fact, the day I wrote my resignation letter it was my 25th birthday — 3 o’clock in the morning — and I was sitting behind the front desk of the hotel. It was the third day that month I had worked 24 consecutive hours.”

She took a leap of faith and moved to Columbus, where some of her friends from Bowling Green lived. After waiting tables for about six weeks, a recruiter reached out to her because Target was opening a distribution center just west of the city.

Daugherty, who earned her MBA from Ohio State University while in Columbus, was part of the startup for that Target facility, starting as a team leader in operations before moving through several different roles within operations, human resources and logistics. She was leading the outbound department before leaving Target after nearly six years.

In 2010, she accepted an opportunity to be a part of a team opening a distribution center with The Home Depot in Columbia, South Carolina.

“It was a rapid deployment center where product moved in and out within 72 hours — something very different than the 1.3 million-square-foot distribution center that Target had in Columbus,” Daugherty said. “I spent two years with Home Depot in operational and QA roles. South Carolina is where I met my husband, who is from Pittsburgh.”

There weren't any supply chain opportunities with The Home Depot in the Pittsburgh area, so she accepted the position of shift manager for Giant Eagle in the health and beauty care retail support center.

“It was a step back and a pretty significant pay cut, but at the time I needed to get to Pittsburgh, so I took it,” she said. “I was in that shift manager role for about nine months, and then was promoted to operations manager for that facility. Eleven months later, I was promoted into a senior supply chain manager position — I was the first female facility manager in the history of Giant Eagle.”

Daugherty spent nine years with Giant Eagle, serving her final three years as vice president of logistics, after working as senior director of transportation and director of inbound logistics and supply chain.

In September 2020, she accepted an offer to become general manager and senior vice president of supply chain at Inmar Intelligence in Winston-Salem, North Carolina.

Daugherty’s transition into supply chain opened a world of possibilities.

“My exposure to supply chain started when I accepted the offer at Target,” she said. “I took it and never looked back. Supply chains are critical to many industries, and their value was fully recognized during the COVID-19 pandemic. A career in supply chain creates limitless opportunities to work in different areas. My experience in operations, HR, logistics, and supply chain planning broadened my knowledge and scope of the industry — and gave me a front row seat to the challenges that exist. There is no better time than now to consider a career in supply chain. The industry needs people and technologies to meet the ever changing demands of the consumer.

“If you don't have that loaf of bread or package of toilet paper on the shelf when customers want it, the supply chain is broken. I think there's something to be said about the level of importance of highly functioning supply chains, and the ability to be a part of them is great.”

Working in supply chain has been an incredible learning experience, Daugherty said.

“I've always approached each new role as another growth opportunity,” she said. “Throughout my career, I've made several lateral moves, and took a few steps back, which I believe was key to my career progression. My eagerness to continue learning and my willingness to take on new roles — even without having previous experience in the area — opened doors for me that ordinarily wouldn't have opened. One of the keys to my success was having the right mentors and executive level advocates in place to coach, guide and support me when taking on new challenges and promotional opportunities. I can't stress enough how important these relationships are and how they can influence your career path.

“I wake up in the morning and put my pants on the same way as everyone else, right? I've led teams of people that are way smarter than I am, which is what has made us so successful. I've never felt like I've been held back because I am a woman. I would say that working in a male-dominated industry, particularly in supply chain and grocery, certainly has its challenges. I've often been the only female in the room, but I've learned how to build confidence in those situations, not be intimidated and ensure that my voice is still heard. I feel so fortunate to have worked for leaders and for companies that consider inclusion and diversity a core value."

“I would not be where I am today without the support of my husband, Shaun, and our children. My greatest success will be when the girls grow up to be strong, confident, and successful women — and our son becomes an advocate for the women he meets in his life.”

The COVID-19 pandemic dramatically changed the landscape for supply chain, particularly in

e-commerce. As online sales skyrocketed, so did returns. Items are returned 8.9% of the time when purchased in store and 30% of the time when purchased online, according to Invesp. There's no sign of online purchasing slowing down or the demands of the consumer lessening. There are six key trends in supply chain that will significantly impact retailer profitability and consumer convenience: